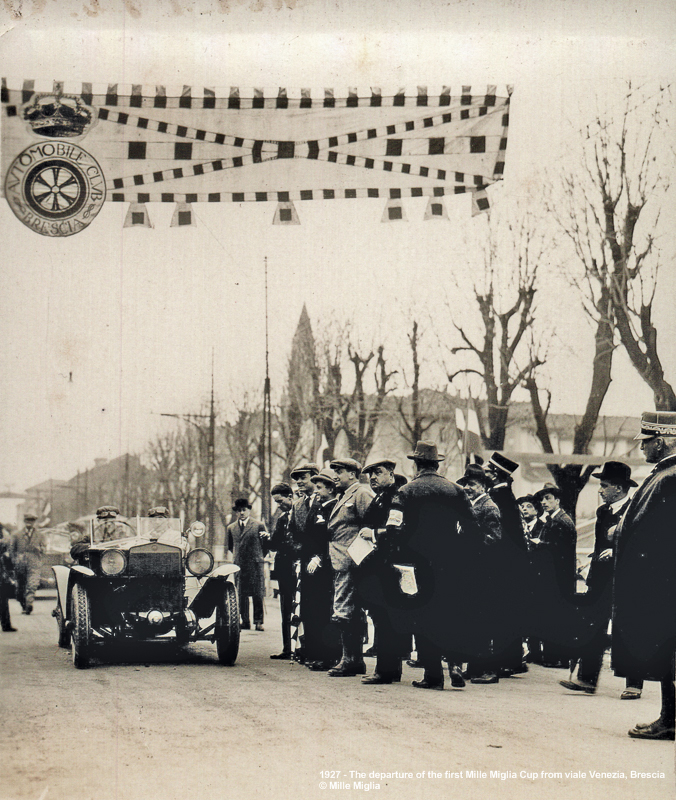 SINCE 1927 CROSSING THE FUTURE.

The most famous road race of all time The Mille Miglia will take place from Thursday 18th to Sunday 21st of  May 2017 on its traditional route Brecia-Rome-Brecia, with 440 participants, representing 39 nations from five Continents. The race will travel through more than 200 municipalities and 7 regions in Italy, as well as the Republic of San Marino.

Being this year a very special one, the year number 90, 90 years of exciting races and glamour. Mille Miglia has been bringing together exeptional personalities into the world of Motor-sport.

Today, the reenactment of the Mille Miglia is an event in a class of its own. Mille Miglia has combined tradition with innovation, and vividly coloured that combination with creativity, elegance, beautiful scenery and the Italian way of living. This plethora of rich elements has made The Mille Miglia a symbol of Italian excellence all over the world.

For its ninetieth anniversary, The Mille Miglia – the first edition of which was held in 1927- presents the thirty -fifth re-evocation edition. The international presentation took place in Geneva, traditionally a meeting placeof different cultures andmulti-ethnic and multi-denominational dialogue, in keeping with the atmosphere of international friendship that has always characterized The Freccia Rossa.

The celebratory trademark of the ninetieth Anniversary groups the distinctive symbols of The Mille miglia History: such as the connection between the number “9” and “0”, representing the symbol of infinitiy, perpetuel motion along a road that ideally crosses Italy. Furthermore, a tribute to the two different automobile races, the speed race of the past and the regular race of the present. The logo also incorporats the hub of a wheel and a stop-watch button.

Confirming what Enzo Ferrari called The Mille Miglia -“the world’s unique traveling Museum”. The spectators of the four stages from Brescia to Rome and back can admire 440 vintage cars of extraordinary historical, technical and sporting value, from eighty-two different Car manufacturers, and hundreds of different models.

To complete this number, never before achieved by any other classic car competition, there will be a further ten cars belonging to a “Military Category “, driven by senior officers of the different Italian Armed Forces, as happened in The Mille Miglia of 1952.

Among the many reasons that make The Mille Miglia incomparably refined, exclusive and prestigious is that it is the only oportunity  to admire, all at the same time, priceless treasures that have written the most beautiful pages of international motoring.

These 440 design and mechanical masterpieces, built before 1957(the year of the las speed edition), will create an unrivalled automotive event, along approximately 1,700 km of Italians roads. This will be made even more fascinating by further 150 cars – produced after 1958 – participants in the “Ferrari Tribute to Mille Miglia” and “Mercedes-Benz Mille Miglia Challenge”, reserved for mostly modern cars of the two Manufacturers.

Some of the Museums sendig their car to Brecia are Alfa Romeo,
Mercedez-Benz, BMW and Porche.

Among the novelties, worthy of mention are the “showcase trials” to be held in some historic squares, by the 440 accepted cars. 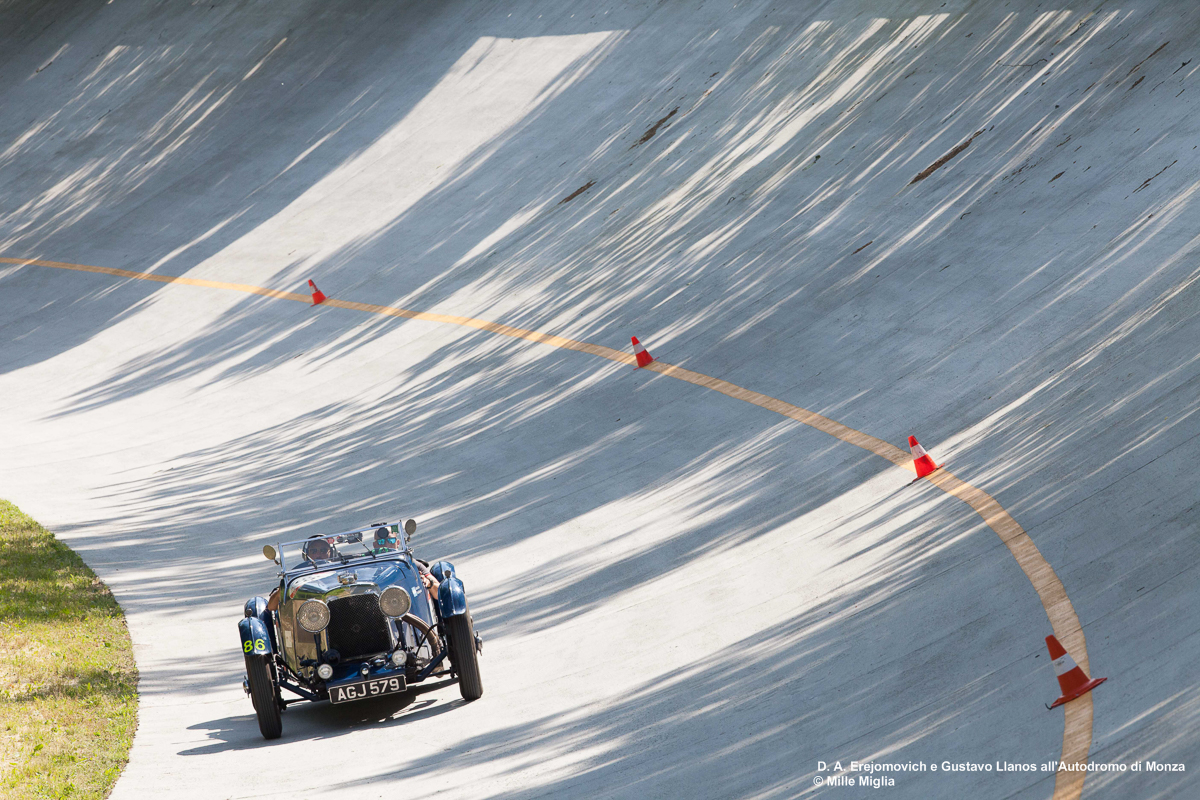 For the fifth year running, 1000 Miglia Srl will be running the great automobile event. The company is a subsidiary of Automobile Club Brescia.

During the past 10 years, there have been many, more or less faithful, reconstructions as to how the extraordinary epic adventure began, for what would come to be known as “the most beautiful race in the world”.

The highly considered and obviously most credible version is without a doubt that stated by one of its founders, Giovanni Canestrini, written up in his very famous book “Mille Miglia”, edited in 1967. Throughout these pages, -also discussed in Giovannino Lurani’s equally famous 1978 book, “The History of 1000 Miglia”– is a description of the memorable incident that occurred on December 2, 1926, the day that has since been officially recognized as the birth of the Mille Miglia.

Canestrini, tinged with a hint of ill-conceived irony, narrates how a group of Brescians arrived to his home in Milan on Via Bonaventura Cavalieri, which included Franco Mazzotti, Aymo Maggi, Renzo Castagnet, (the other three musketeers) and his friend, Flaminio Monti. The rest of the story is history, until Franco Mazzotti declares the words: “Mille Miglia Cup”.

To better understand how the meeting took place in Canestrini’s home one must go back some years to immediately following the First World War.

A series of “very fascist” laws overturn the Statute, destroying the free state, and institute the fascist regime: the Parlament has been stripped of its powers and the head of state, Benito Mussolini, gains almost complete power. Political parties and trade unions are suppressed; an order is passed to closed the few opposition journals that had nearly escaped being closed down the previous year during the violence and attacks.

The Italians, even those who have no desire to do so, are wearing the distinctive National Fascist Party armbands (NFP, from here on). With the typical irreverence of their unyielding souls, the Brescians rename it the “sömega”, or “bedbug”.

Great Britain is the scene of a very violent worker’s class protest, while in Japan Hiroito rises to the throne.

Automobilists are excited for the newly approved Brescia-Bergamo highway and the “Gardesana Occidentale”state road, which has been opened all the way to Riva del Garda.

Getting back to the meeting at Canestrini’s home: the rather romantic article written by the person who is considered the “father of automobile journalism” is briming with affection for his three friends, especially Franco Mazzotti, the foursome’s charismatic boss who later died in 1942, having been shot down during a mission on board his military plane on the Sicilian Canal.

However, one mustn’t believe that in via Bonaventura Cavalieri the idea originated and that the decision was made in only a few minutes. The reason for the visit by the three Brescians to their journalist friend was clear and premeditated. In the numerous meetings among motor enthusiasts many differences emerged that could not be postponed:

1) Brescia, the city they considered to be home to “automobile racing”, would have to reclaim its lost record.

2) The Lioness of Italy would need to leave the hub of Milan, with the first step being to create its own Automobile Club that wouldn’t have to depend on the Milan branch, as had been happening since1906.

3) The goal was to organize a major event, «a long-distance race open to traffic using the latest model cars, not racecars. A race with a practical purpose and immediate significance, from both a technical and sports standpoint».

4) The type of competition, far away from the circuits, would have to stimulate the return to racing by the national automobile industry, thereby representing an authentic testing ground and trial run.

«It was Brescia, or rather, a group of Brescians, who shook the universal apathy», Canestrini acknowledged, at the time.

The day finally arrived: March 26,1927: «No one has forgotten the triumphant debut of the Mille Miglia. – recalls Canestrini – the 77 cars that left Brescia encountered a crowd of enthusiastic people lined on either side of the street, cheering for the entire 1600 km. Not one stretch of the road was left unmonitored, not one act of indiscipline, not one accident. Thirty thousand military troops, numerous sportsmen, with a moving passion and self-sacrifice, had made this miracle of organization possible, pride that constitutes one of the expressions of the new spirit that cheers on the Italian people. The other miracle came from the technical race results and from the sweeping spirit of all the participants».

The Mille Miglia was created to be run only once, but it was so successfull that Benito Mussolini pronounced that fateful: “It muss be repeated”.

Ettore Bugatti´s eagerly awaited team arrived from France, and Vittorio Jano, the manager of Alfa Romeo, entrusted his new creation, the revolutionary 6C 1500 Super Sport, supercharged and with a fixed head, to the “Negher” Giuseppe Campari. The Bugatti proved to be unsuitable for The Mille Miglia and Campari arrived ahead of the O. M. of  Franco Mazzoti.

Now 90 years after, The Mille Miglia continues to be a Legend, a Tradition, and one of the most beautiful races in the World.

An Event not to be missed!