In the Air, on the Ground and in Space

100 years of aviation innovation on the outdoor display site

Berlin, 23 March 2018 – The ILA will be taking place from 25 to 29 April 2018 in Berlin; where the leading trade fair for innovations in the heart of Europe will be displaying more than 200 aircraft and other exhibits, including many making their first appearance in Germany or on the world stage. 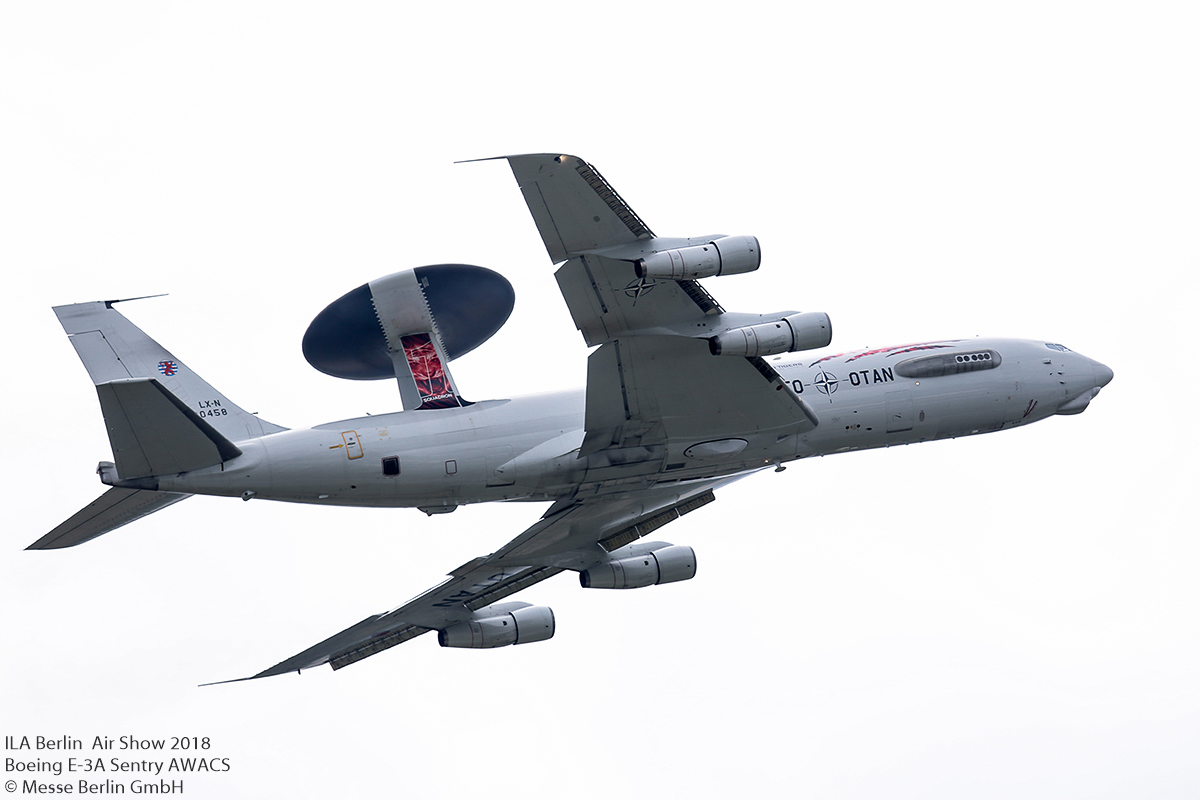 France is the partner country of ILA Berlin 2018. It’s hard to imagine a more suitable partner: French aerospace companies are global leaders. With annual revenues of 60.4 billion Euro, about 187,000 workers and an export share (41.1 billion €) totaling 86 percent of consolidated revenues, the industry serves as one of the nation’s most vibrant economic sectors. France as the partner country of ILA 2018 offers further proof that ILA stands for Innovation & Leadership in Aerospace.

ILA is expected to host a high-level political delegation from France, the partner nation of this year’s airshow. “France and Germany have always been strategic partners when it comes to aerospace,” said BDLI President Klaus Richter.

“Building on this unique relationship, we now enter into a new era in Franco-German relations – and send a strong, united message to policymakers, industry and the public,”
he continued. “To sum up: This is excellent for our industry and a major boost for French-German relations.”

All flight routes lead to Berlin

Over 150,000 visitors will be coming to marvel at thefuture of aerospace in Berlin. Exhibits will include the CityAirbus, a battery – powered electric aircraft for passenger transport of the future. It can take off and land vertically and the plan is for future versions to be autonomous. Airbus will also be exhibiting the Zephyr, a solar – powered drone with a wingspan of 25 metres, which can glide at altitude for weeks and could provide an alternative to commercial satellites. 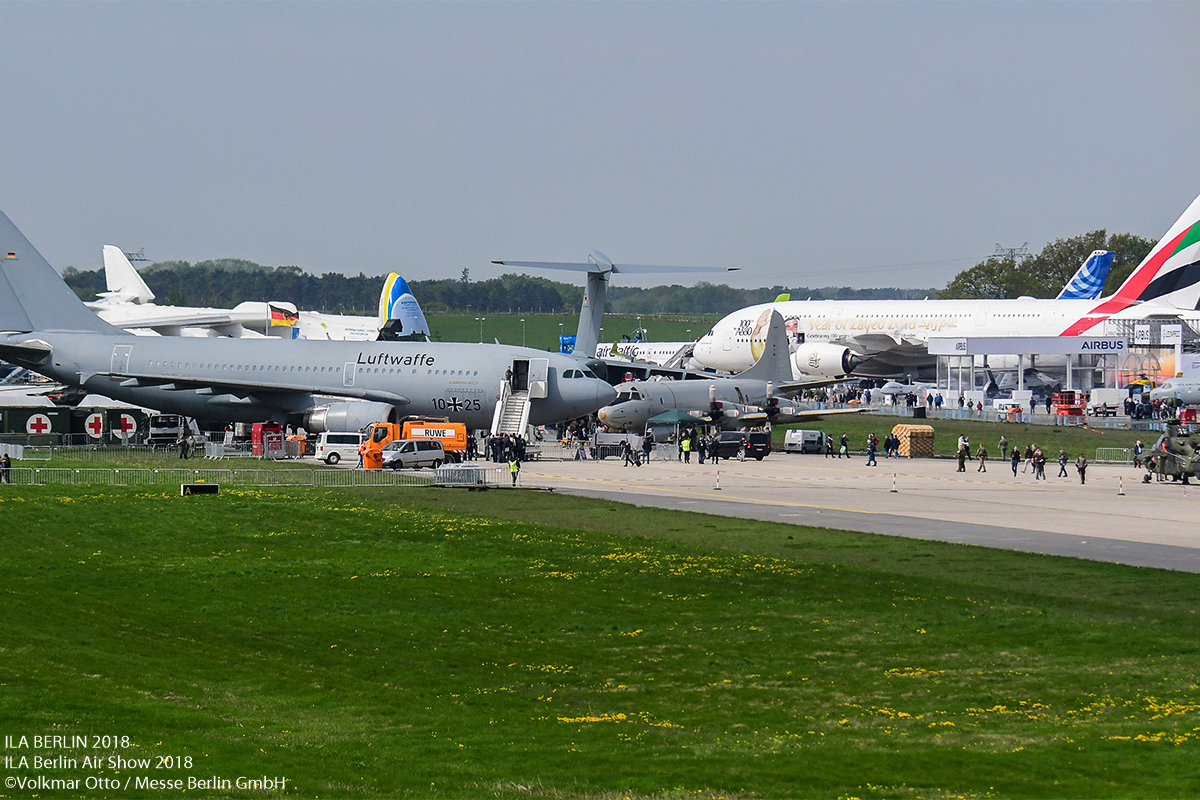 Another aircraft debuting at the fair will be the Airbus A340 BLADE (Breakthrough Laminar Aircraft Demonstrator in Europe), a test aircraft whose laminar wings significantly reduce wind drag. Exhibits representing every field of aerospace will be there, including the DLR A320 – ATRA research aircraft, the unmanned Euro MALE RPAS (Remotely Piloted Aircraft System), the Boeing E – 3A Sentry AWACS, a reconnaissance aircraft, and the CASA C – 101 planes of the Spanish aero batics team Patrulla Águila. For the first time the CH – 53 transport helicopter will be shown to the public.

The unique feature of the ILA is its space flight exhibition, the leading one of its kind in Europe. An unmissable 1:4 scale, 18 – metre model of the Ariane 6 launcher will be pointing visitors to the ILA Space Pavilion. Two original boosters and one of the final stages of Ariane 5 will also be on show. The MERLIN Franco – German satellite mission will provide another shining example of the close partnership between the two countries. The Galileo satellite constellation will be on show, and the Tandem – L Earth observation mission will also be presented at the fair. Astronauts‘ Day will provide an in sight into daily routines in outer space. Representing ESA, the German astronauts Matthias Maurer and Reinhold Ewald will be at the event. Visitors can find out about experiments planned for this year’s Horizon mission, which will be taking Alexander Gerst to the ISS again. 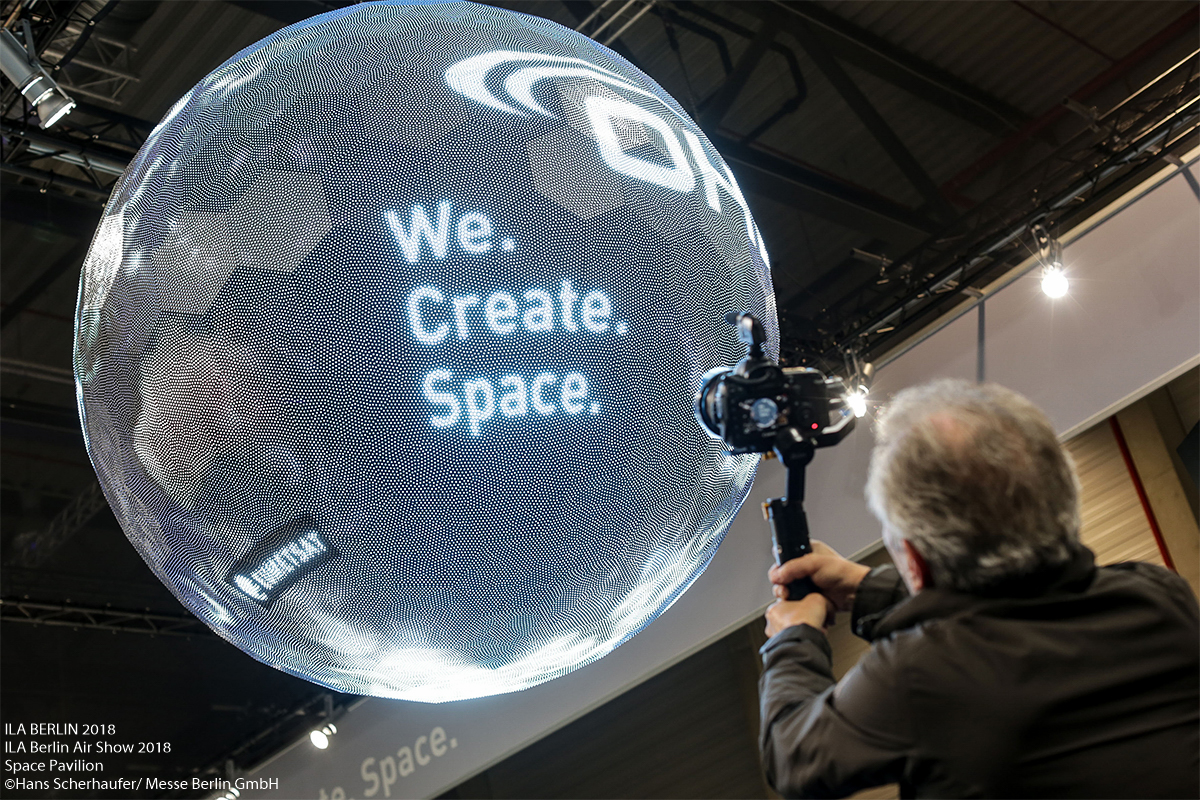 The many aerospace themes at the ILA Space Pavilion cover the entire range of research and development projects and applications. Visitors can find out how space programmes are actively helping to improve the quality of life on Earth, making an important contribution to protecting the environment and our climate, and are providing us with new knowledge. At the ILA Space Day an outstanding programme of conferences will gather leading figures from the space industry.

Under the patronage of the Federal Ministry of Economics and Energy the ILA Space Day will devote itself to key space flight topics that will concern us in the near future. Thus, space experts will be discussing ‘Security in Space’ and independent European access to space with the new Ariane 6 launcher. Under the slogan of ’Raumfahrt bewegt!’ a discussion will take place examining the ever – closer relationship between space and commercial aviation.

Two other panels will examine the findings of satellite observations of Earth and communications in the digital age. To mark the tenth anniversary of the Columbus mission, an in – depth discussion will be held on Europe’s future role in space.

Focus on helicopters at the HeliLounge

The Heli Lounge, the only one of its kind in Europe, will feature an impressive and wide – ranging programme of conferences on helicopter use by the German military (Bundeswehr) and federal police force. 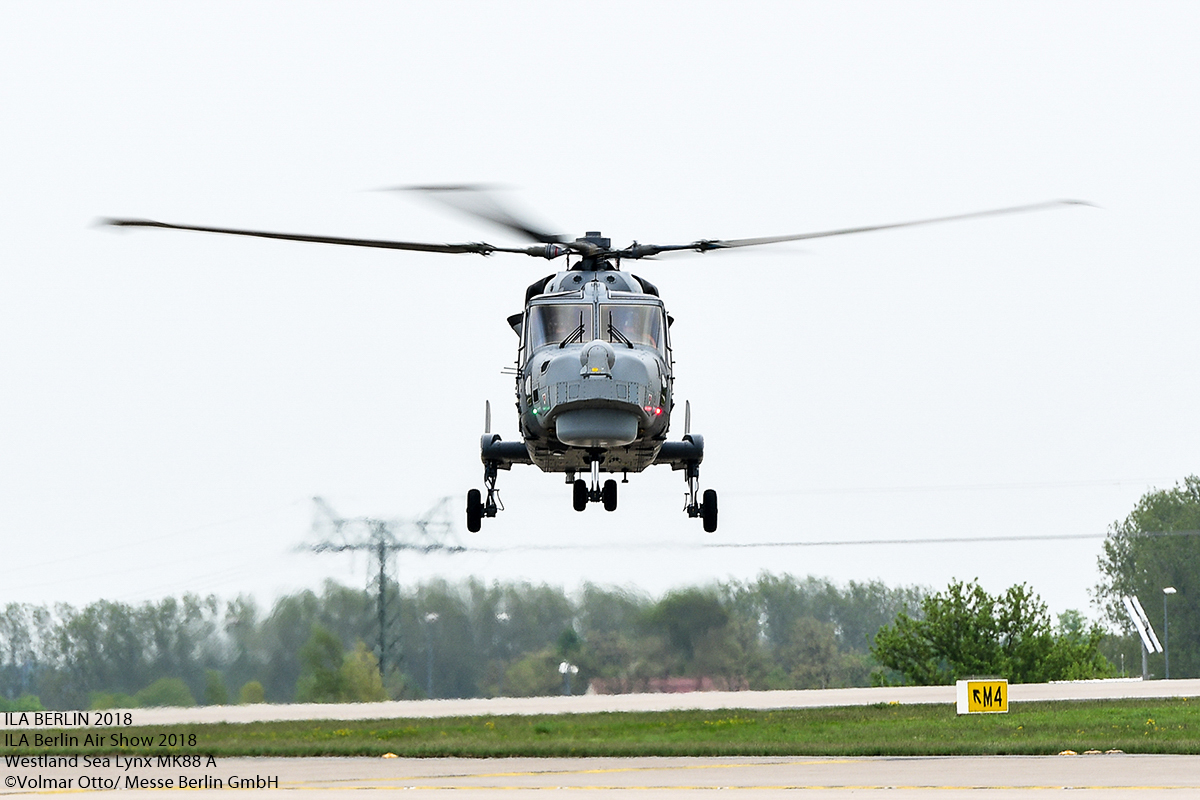 Digitalisation and interoperability will be two of the forward – lookingtopics. A symposium will discuss the collaboration between the Bundeswehr and industry which aims to expand the use of airborne weapons systems. Multinational joint ventures such as the International Helicopter Training Centre in Bückeburg and the Franco – German Training Centre (TIGER), where missions are trained on simulators, will also be presented at the conferences. The helicopters on the Static Display will impressively underscore the HeliLounge’s message.

Airbus will be exhibiting the H145M as well as the brand new H160, which will soon be going into service. Experts will also have information on helicopter careers. Technology close – up: the Bundeswehr displays new systems As the largest exhibitor at the ILA the Bundeswehr will be exhibiting the full range of its military flying equipment. Aircraft of all types and sizes will be on view, including the two – seater Pilatus PC -9, the Airbus A310 MRTT, a twin – jet refuelling and transport aircraft, and the ultra – modern, four – engined A400M transport aircraft.

On an outdoor display area covering more than 10,000 square metres the Bundeswehr will have the latest information about the armed forces, together with an extensive range of exhibits numbering more than 40 air craft. Among them will be the Eurofighter and Tornado, which visitors can also in spect, as well as transport aircraft including the A400M and A310 MRTT MedEvac, the A319 CJ for special air missions, and the Transall C – 160. Helicopters will include the CH – 5 3K, NH – 90 and Tiger, the multi – purpose EC – 135 Bluecopter, the Sea Lynx, the Sea King and the H145M, which flies missions for the Bundeswehr’s special forces.

Besides numerous technological exhibits and aircraft, various unmanned reconnaissance systems such as Mikado and Luna operated by the army and other forces will also be on display. Other exhibits on the Static Display will include the reconnaissance drones HERON 1 and HERON TP. An additional highlight will be the unveiling of a 1:1 scale mock – up of the European Drone Programme’s Euro MALE RPAS.

Research aircraft and an asteroid lander at the ILA

The German Aerospace Centre (DLR) will be arriving with its own fleetof research aircraft. Visitors can marvel at research helicopters, test aircraft and a flying laboratory operated by Europe’s largest civilian research fleet, which includes the Airbus A320 ATRA and Falcon 20E. 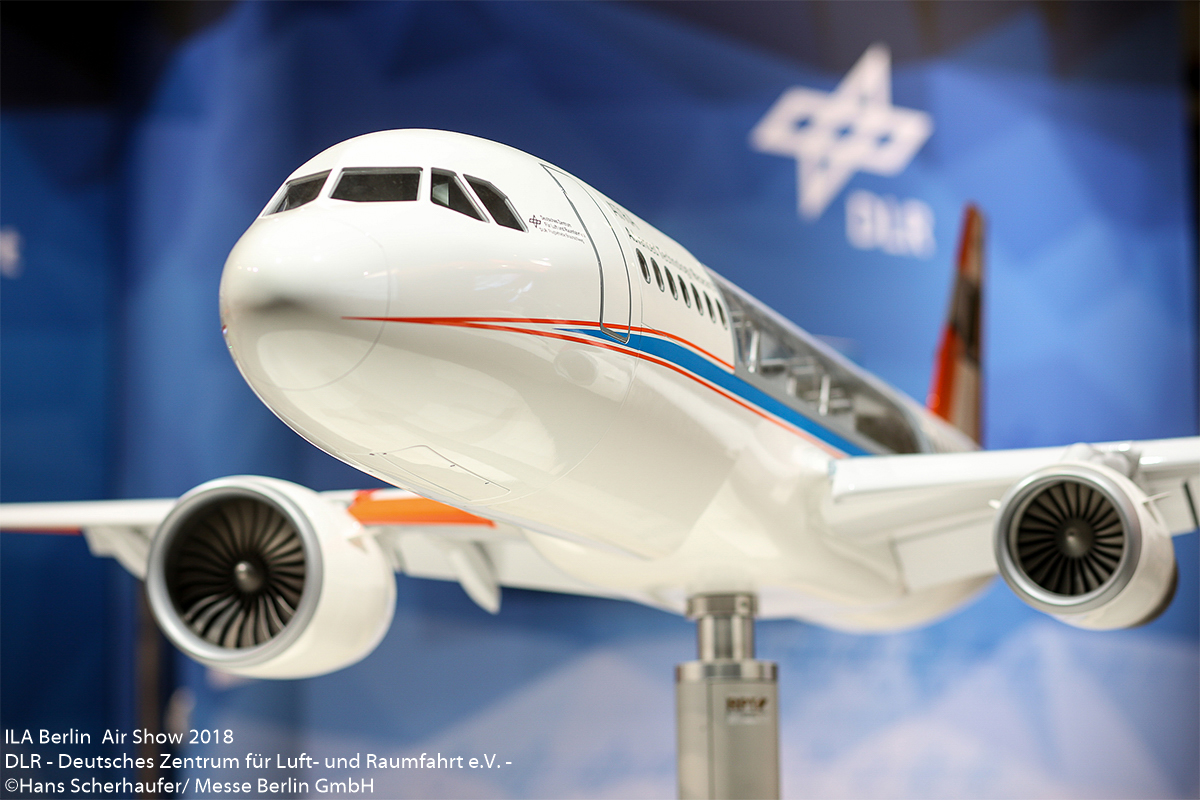 Together with its partners the Japanese and French space agencies JAXA and CNES, as one of the largest organisations exhibiting at the show the DLR will be showcasing the Hayabusa II asteroid mission with a 1:1 scale model of the space probe and its piggyback lander named MASCOT, which is scheduled to touch down on the asteroid Ryugu in October 2018, where it will move by hopping around on the surface. Other exhibits will include the innovative Tandem – L concept for radar – assisted global monitoring of the environment and climate, as well as the EDEN – ISS Antarctic Greenhouse project for testing food supplies on Mars and the moon. At the ILA CareerCenter the DLR will be offering younger visitors the chance to take a virtual space walk outside the International Space Station (ISS) and conduct virtual testing of new aircraft concepts.

For those keen to find out about the digital future of aviation a visit to the ILA Future Lab is a must. Key themes will include the passenger cabin of the future, hybrid – electric flight, alternative fuels and the propulsion systems of the future. In all this technology the focus is on digitalisation, sustainability and networked systems. At the ILA Future Lab Forum the incubators Airbus Bizlab, ESA BIC and STARBURST will be giving startups an opportunity to network with leading companies and organisations. Up to ten startups respectively will be able to present their innovations there. Another key topic will be urban air transport. In addition to its CityAirbus, Airbus will be presenting the RACER, a high – speed heli copter, and Volocopter will be showing its vision of ‘Urban Air Mobility’.

Pioneers in Berlin, the birthplace of aviation

In the city that was home to Otto Lilienthal one of the themes will be the history of aviation. Milestones in aviation history, including a Junkers JU 52, known as ‘Tante (Auntie) Ju’, a Douglas DC -3 candy bomber, which airlifted supplies to Berlin 70 years ago, as well as a Fieseler Storch can all be witnessed at the world’s longest – established air show. 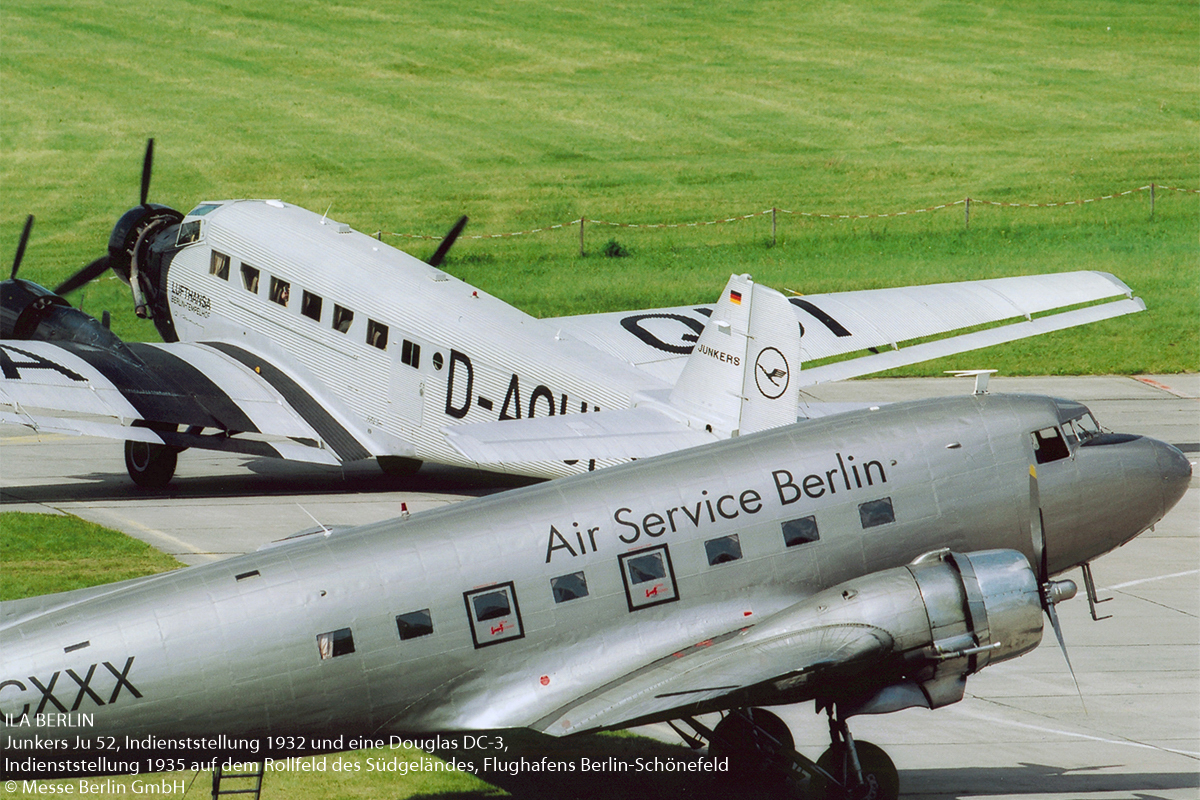 The lifeblood of the industry is its supply chain. At the International Supplier Center – ISC, global concerns will be able to meet highly specialised international SMEs. More than 250 registered exhibitors from over 20 countries will be ready and waiting. The industry’s key players can be found on an area covering 3,000 metres, among them Airbus, Bombardier, Boeing, system integrators such as Diehl, Liebherr and Rockwell Collins, plus hi-tech specialists such as Autoflug, Sell and Recaro.

Innovation: the driving force behind

conferences The ILA’s programme of conferences is second to none in the aero space world. The con ference centre is fully booked and demand is high. The programme will feature many topics, including nanosatellites, digitalisation and eco – friendly flight. Events dealing with the latest in research, development and sustainability will be heavily featured. Other highlights will include conferences on cybersecurity and startups as well as a hackathon

Flying taxis, zero emission aircraft, 3D-printed drones – the aerospace industry stands for innovation like no other. German aerospace companies invest 11% of their revenue in research and development – about twice as much as other industries.The spectacular results will be on display at ILA Berlin, scheduled totake place from 25 to 29 April 2018, where over 1,000 exhibitors will showcase their know-how in Germany’s capital. Exhibitors range from large corporations to highly specialised suppliers and operators, rep resenting industries from civil aviation to defence and security and space.