A Great Jazz Festival in a Small Beautiful Great Place.

The Montreux Jazz Festival was created in 1967 by Claude Nobs, René Langel, and Géo Voumard, and has since become a landmark event. Not because it draws more than 250,000 visitors, or because those two weeks in Montreux make up one of the best-known events in Europe and beyond, but rather because the Festival has kept its soul intact throughout all this growth.

At Montreux, the intimacy that encourages improvisation remains a top priority. Proximity between the biggest artists and their audiences in concert halls of reasonable capacity, comfortable surroundings, and a quality listening experience all combine to produce unique concerts and encourage memorable moments.

While jazz and blues are at the roots of this event, other styles of music quickly found their place as well, anchored by artistic encounters between generations of musicians and unique experiments. Montreux has seen historic performances by artists including Nina Simone, Miles Davis, Ella Fitzgerald, Marvin Gaye, Prince, Leonard Cohen, David Bowie, and Stevie Wonder. 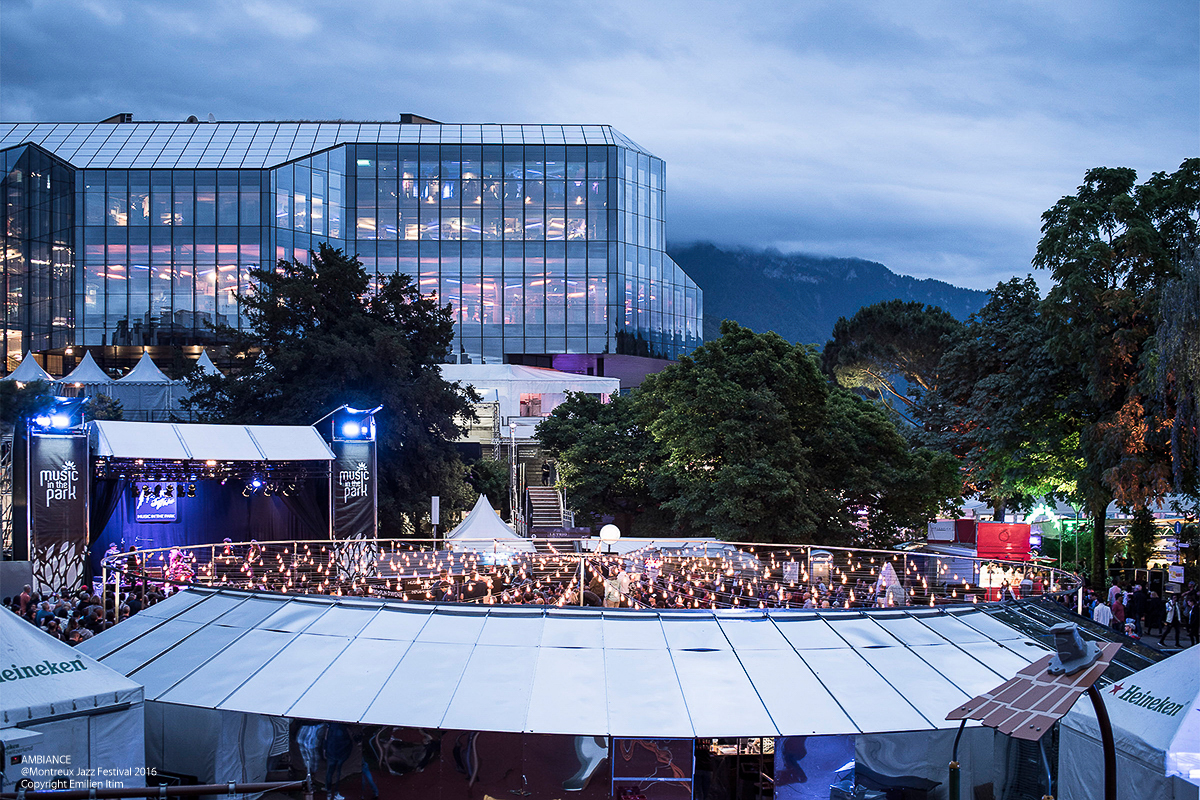 The three ticketed venues (Auditorium Stravinski, Montreux Jazz Club, Montreux Jazz Lab) showcase the Festival’s prestigious lineup of artists. However, from the very beginning Festival founder Claude Nobs wanted to offer access to music to everyone, and so a wide variety of free programming energizes the Festival site and provides opportunities for emerging artists to shine. Kicking off each afternoon with the open-air stage of Music in the Park and the workshops, and continuing until the wee hours with the Rock Cave and various after-show events, the Festival ambiance is in full swing on the lakefront promenades with their rich variety of food stands and on the terraces by the lake with their inimitable Alpine backdrop.

From the very beginning, motivated by a peerless commitment to sound quality, the Festival has painstakingly recorded all its concerts using the latest technologies. This unique collection of audiovisual archives includes more than 5000 hours of live music, and has been recognized by UNESCO’s Memory of the World Register. More than 400 Montreux concerts have been published, like Les McCann and Eddie Harris’ famous 1969 Swiss Movement or the unbelievable concert by Nina Simone from 1976.

Following Claude Nobs’ passing in January 2013, Mathieu Jaton took up the reins of the Festival. With a unique identity in the world of music, each year the Montreux Jazz Festival forges a new chapter in an odyssey built on audaciousness and dreams without limits.

The little city of Montreux has been a favored destination of the English since the 19th century, with Lake Geneva at its feet, its head in the mountains, and the sun as its guardian angel. Few travelers passing through the region can resist the temptation to stop for a while to enjoy all Montreux has to offer.

In those days of Sommer 1967, the participants of the “Rose d’Or” TV contest were enjoing particularly the place of Montreux. The only thing missing was something to do in the evening.

A certain employee at the tourist office named Claude Nobes took care of this issue. Truly passionate about music, Claude Nobs made it his mission to improve the situation, and did so with such panache that a few year later the decision was made to create a whole new event. Thanks to his enthusiasm and audacity, the man who first convinced the Rolling Stones to perform outside Great Britain was able to make the case for a festival dedicated to jazz and other musical genres in the Swiss Riviera. 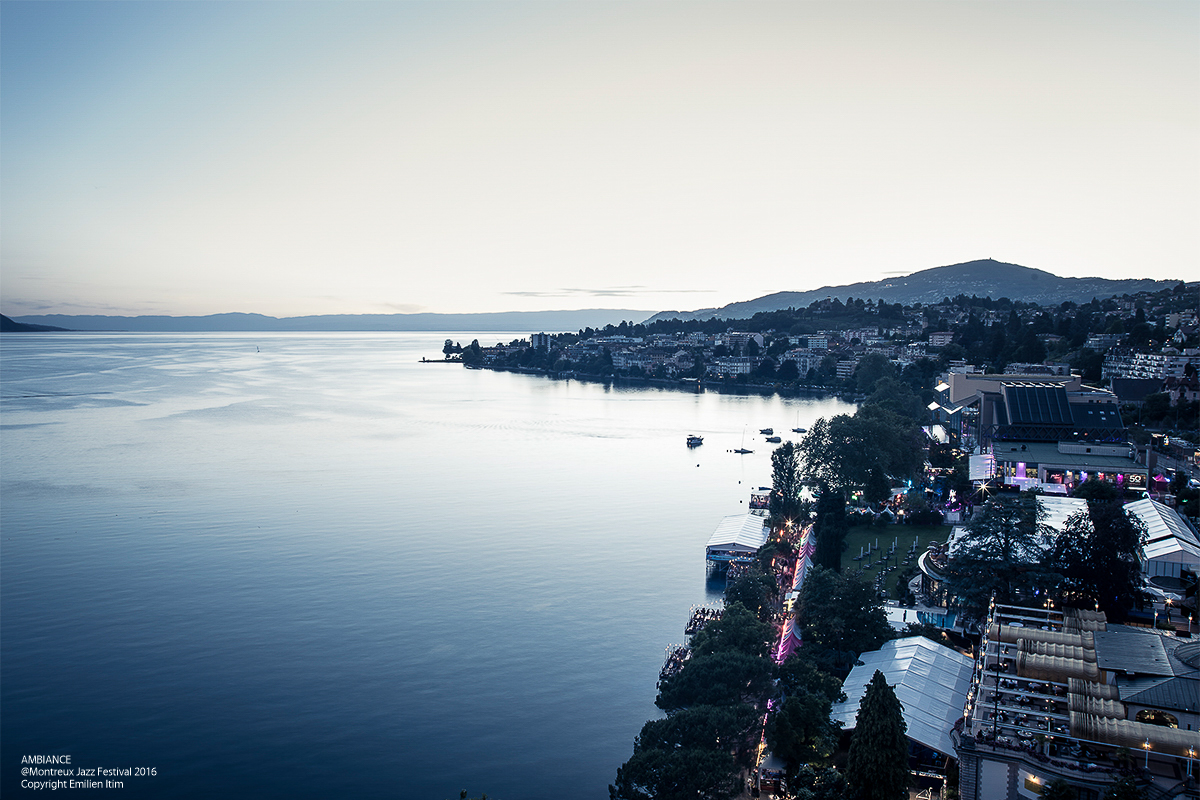 The Montreux Casino hosted the first Montreux Jazz Festival over three days in June, 1967: fifteen performances on the paying stage, and already jam sessions at all hours in the gardens. A highlight of that edition was the Charles Lloyd Quartet introducing Montreux to not only that master saxophonist, but also to pianist Keith Jarrett and drummer Jack DeJohnette. All three would return multiple times, even quite recently, faithful to the magnetic attraction between the Festival and its artists.

The Cards on the table: you had to be a little crazy to take this risk. Claude and his friends René Langel and Géo Voumard refused to listen to any reason—they never wanted a small festival. Not for glory, not for money, but because of their love for the music. Their devouting passion never let them take a  “no” as a final answer, and they were always dreaming bigger and bigger. The Festival showed great vision in recording all its concerts from the very beginning, and has never stopped doing so, always using the best technologies available at the moment.

By the second year, the event had lengthened to five days. It kept on developing, and grew more and more successful. While the Festival was built upon jazz and blues, the musical forms about which Claude Nobs was the most passionate, rock music was already present as early as 1969 with the band Ten Years After. The recording of the legendary concert by Les McCann and Eddie Harris at that edition, Swiss Movement, became the first jazz album in history to sell more than a million copies. That live performance, and the many which followed, helped forge the Festival’s international reputation.

In 2016, the Montreux Jazz Festival is celebrating its 50th edition. A half century of sublime living music in this extraordinary little city. The emblematic 2016 poster by Giovanni Riva, like all the projects and collaborations for this forward-looking jubilee, are steeped in the historic bonds between the Festival, the artists, and the public.

Artistic convergences, jubilant encounters, and close connections between generations: this 51st edition illustrates all the facets of the Montreux Jazz Festival. Sculpted with precision, the programming draws upon the foundational strength of jazz, discovers gripping young talents, and heralds the decisive returns of pop sensations and R&B royalty.

Particularly rich, the program for this edition reveals subtle alchemies and variegated genres. Care for details, so important in Montreux, gives a profound and intense texture to this lineup.

This year, the Out of the Box experience brings yet another aspect to the programming. Through emblematic sites in the region, the Festival offers a tailor – made showcase for a limited selection of outstanding artists.

Exploding generational and stylistic barriers, the Auditorium Stravinski has many musical stories to recount. 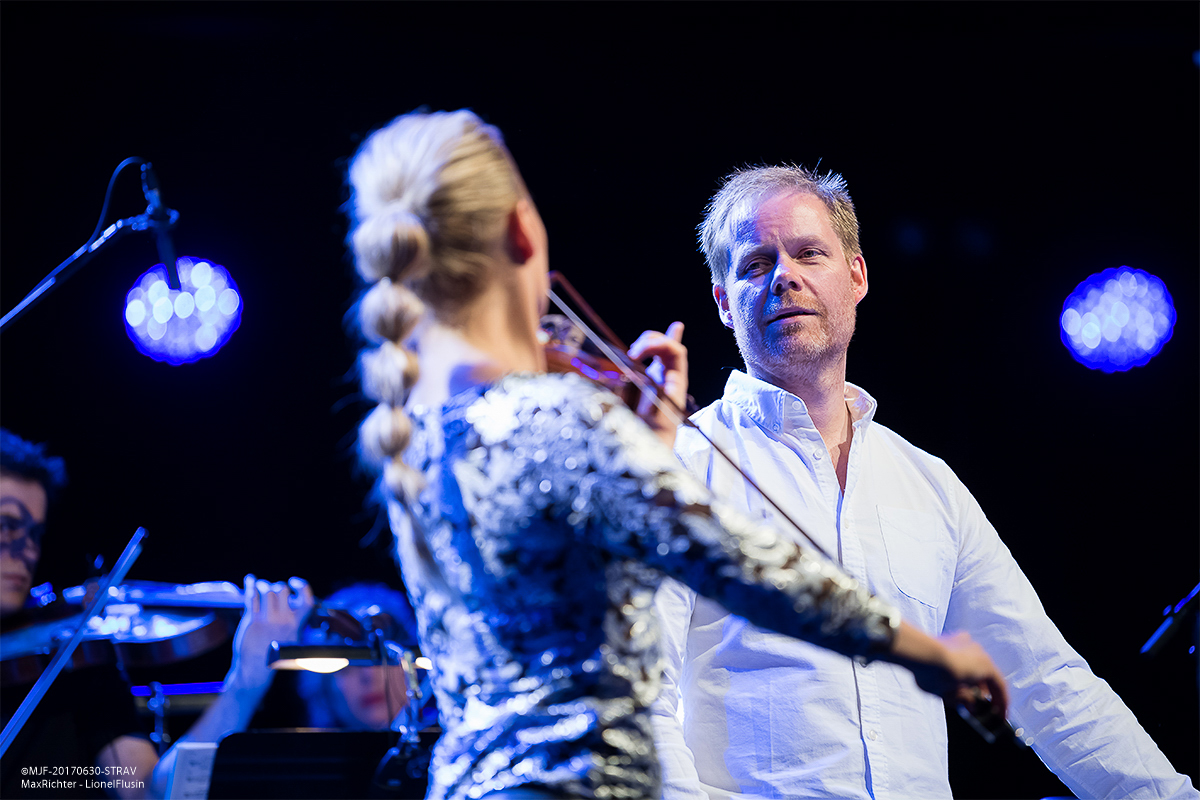 Returning to the Festival, Grace Jones and the Pet Shop Boys have each, in their own way, imposed an avant – garde aesthetic, combining music and visual arts. On the rock front, Brian Wilson and Bryan Ferry will play the same night (9 July). With the Beach Boys and Roxy Music, these two singers charted a regal path to artistic rock, to which Phoenix, Kasabian, and The Kills, all present at the Festival this year, would attest.

The Stories from the Stravinski also echo the prophetic powers of the stage at the Lab. From among the gems unearthed by the programmers a few years ago, we will now see return to the big stage: London Grammar, Kaytranada, Passenge, The Lumineers, and Nicolas Jaar. The latter will play the same night as Max Richter for a sumptuously electronic opening night! These artists’ ascent of Mount Stravinski underscores the close relationships between the Festival and our guests, built over the long term.

Within the cozy intimacy of the Club, legends and young prodigies of jazz feel right at home. This return to roots encourages improvisation and the emergence of rare moments. First off this year are dizzying lineups, evenings born of extraordinary encounters. So Taj Mahal and Keb Mo’, blues stalwarts, are together for the first time on stage, after having recorded the LP TajMo.

Shabaka & The Ancestors stems from a spontaneous, spiritual, jubilant encounter between London saxophonist Shabaka Hutchings and South African musicians. France’s Emile Parisien and Vincent Peirani pay tribute to Joe Zawinul with the project File Under Zawinul, which brings together on stage several old companions of the Weather Report pianist. 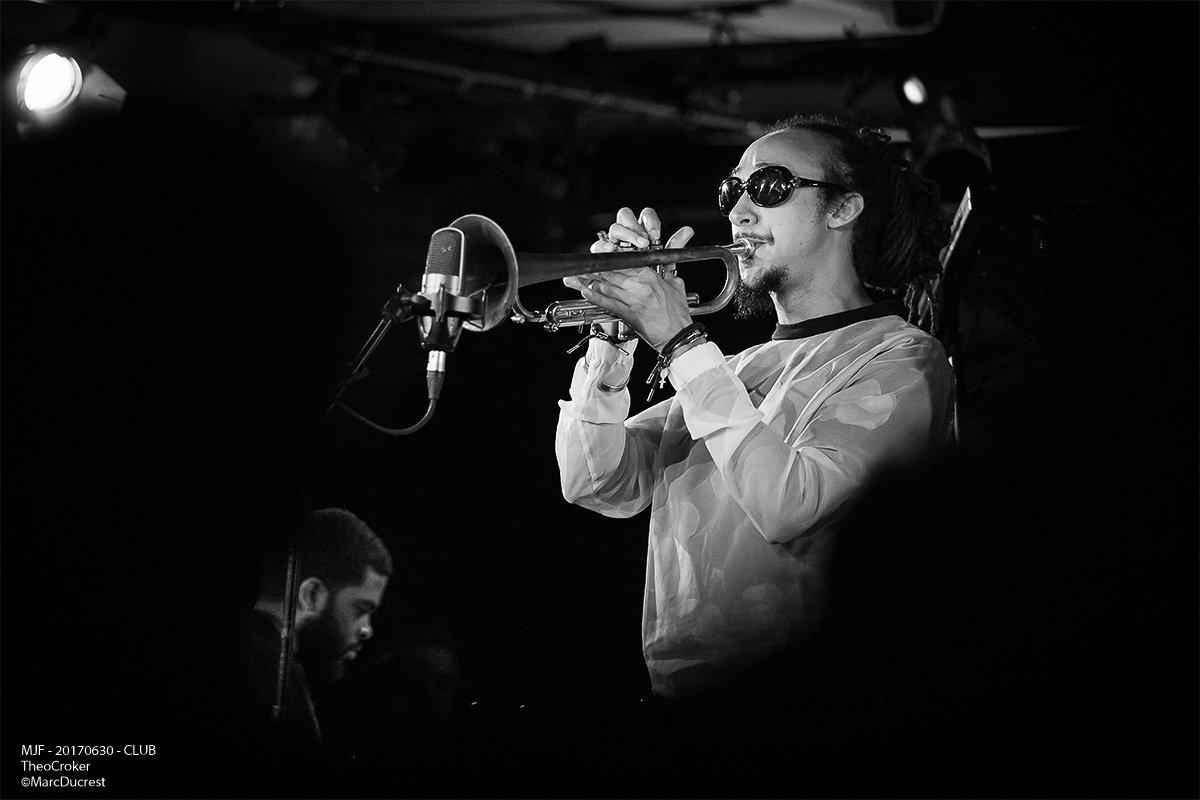 The carefully crafted evenings at the Lab will get hearts pumping: sixteen combinations concocted for that venue by programmers who have proven their perspicacity.

The summer’s indie rock fragrances will unfurl a kaleidoscopic melancholy with the return of the Fleet Foxes, the mastery of Alt – J, and the majestic Kevin Morby. The not – to – be – missed and playful pop night brings together Paradis, with their spellbinding loops and lyrics, the fizzy formation La Femme, and optimistic and variegated experts Metronomy (10 July).

Yello, duo of electro dandies, is back on disk and on stage, with a show shaped like a portal into the universe of their dada – esque videos. Other noteworthy electronic musicians of the edition: Jacques, with his on – stage composing, and the acclaimed Bonobo with an incomparable and hypnotic live show.

OUT OF THE BOX

The Out of the Box experience brings yet another aspect to the programming. Through emblematic sites in the region, the Festival offers a tailor – made showcase for a limited selection of amazing artists.

Out of the Box delivers stellar combinations between unusual venues and artists who refuse to be pigeonholed. The hall of the Fairmont Montreux Palace (capacity 315) will notably play host to the enchanting piano melodies of Peter Broderick, Douglas Dare, and Federico Albanese. The piquant poetry of Juliette Armanet and Albin de la Simone will also be on display there, as will the fragile charm of Ry X and the disarming folk of Aldous Harding.

The Hôtel des Trois Couronnes in Vevey (capacity 250) will be caressed by the jazz – electro of Bugge Wesseltoft & Henrik Schwarz, while the not – so – ancient motifs of La Tène will resonate within the walls of Chillon Castle (capacity 200).

In addition to these historic spaces that have already hosted Creations in the past, the Abbaye de St – Maurice (capacity 100) will for the first time be the scene of a unique electro – acoustic organ and violin concert offered by Tobias Preisig & Stefan Rusconi. 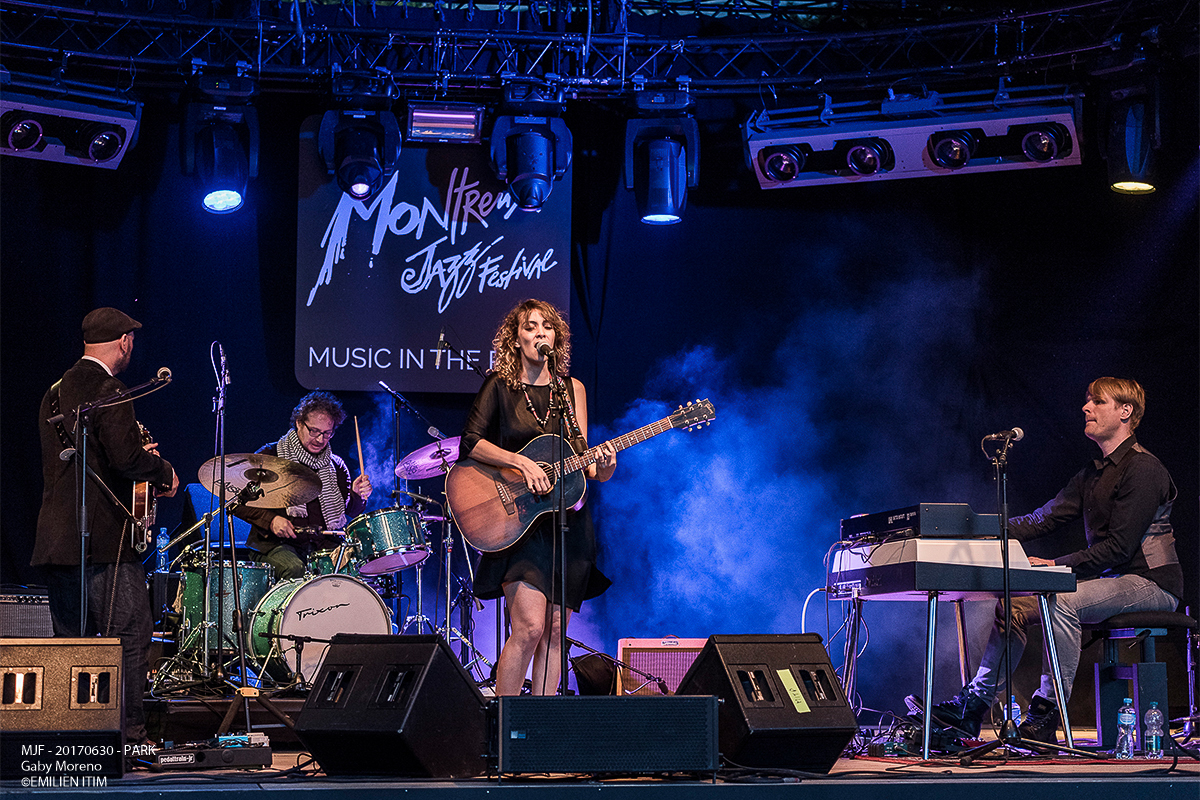 Outside the Festival grounds, these historical sites invite you to experience exceptional concerts in a serene, nearly meditative fashion…And Much More!