THE MOST ROYAL RACES OF ALL TIME 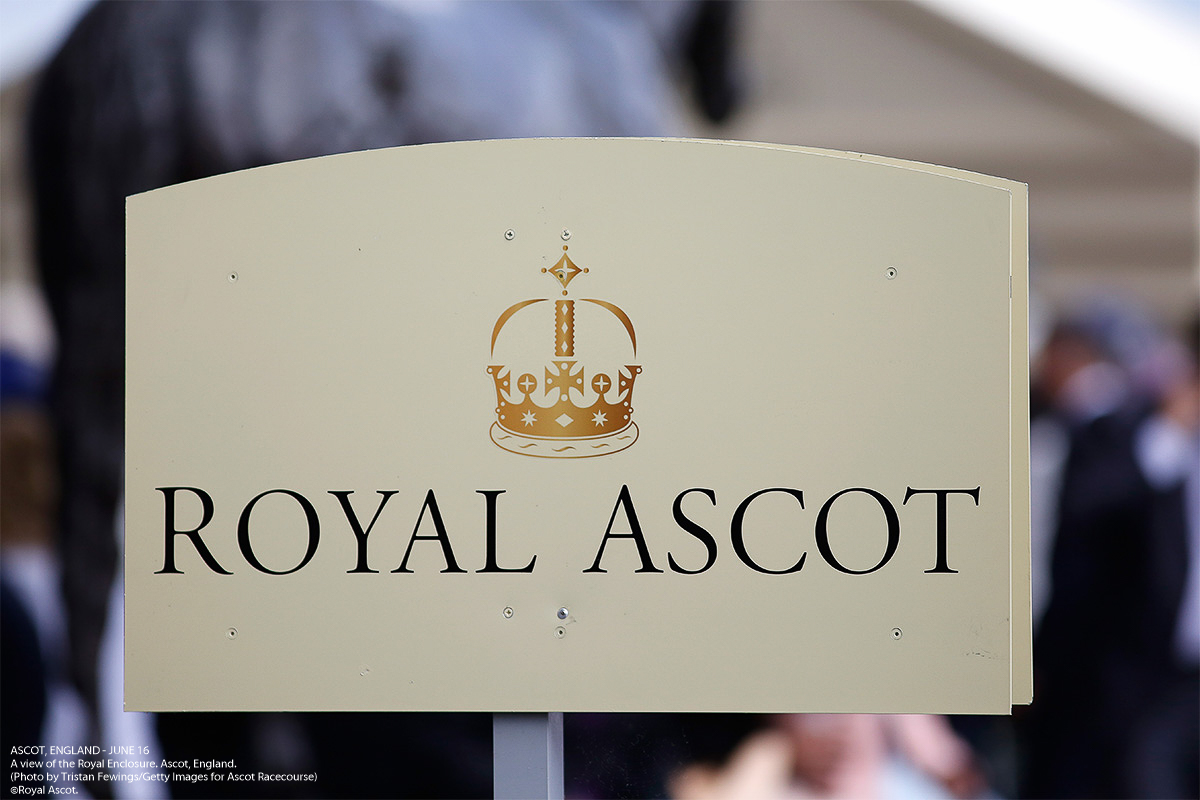 ASCOT, ENGLAND – JUNE 16: A view of the Royal Enclosure on day 3 of Royal Ascot at Ascot Racecourse on June 16, 2016 in Ascot, England. (Photo by Tristan Fewings/Getty Images for Ascot Racecourse)

The Royal Ascot is the centrepiece of Ascot’s year and dates back to 1711 when it was founded by Queen Anne.

Every year Royal Ascot is attended by Elizabeth II and other members of the British Royal Familly such as The Prince of Wales, arriving each day in a horse-drawn carriage with the Royal procession taking place at the start of each race day and the raising of the Queen´s Royal Standard.

It is a major event in the British social calendar, and press coverage of the attendees and what they are wearing often exceeds coverage of the actual racing. There are three enclosures attended by guests on Royal Ascot week.

The Royal Enclosure is the most prestigious of the three enclosures, with recent visits from the Queen and Royal Family members. Access to the Royal Enclosure is restricted, with high security on the day.
Those in the Royal Enclosure have the options of fine dining and hospitality, and a selection of bars.
The dress code is strictly enforced. For women, only a day dress with a hat is acceptable, with rules applying to the length and style of the dress. In addition, women must not show bare midriffs or shoulders. For men, black or grey mornig dress with Top Hut is required.

Over 300,000 people make the annual visit to Berkshire during Royal Ascot week, making this Europe’s best-attended race meeting. There are eighteen group races on offer, with at least one Group One event on each of the five days. The Gold Cup is on Ladies’ Day on the Thursday.

In 2013, the Windsor Forest Stakes was renamed the Duke of Cambridge Stakes, with the Queen’s consent, recognising the new title given to Prince William.

In 2015, the newly created Commonwealth Cup became the eighth Group One race at Royal Ascot, replacing the Buckingham Palace Stakes.

In July 2009 Ascot Racecourse also hosted the third round of the UAE President’s Cup. 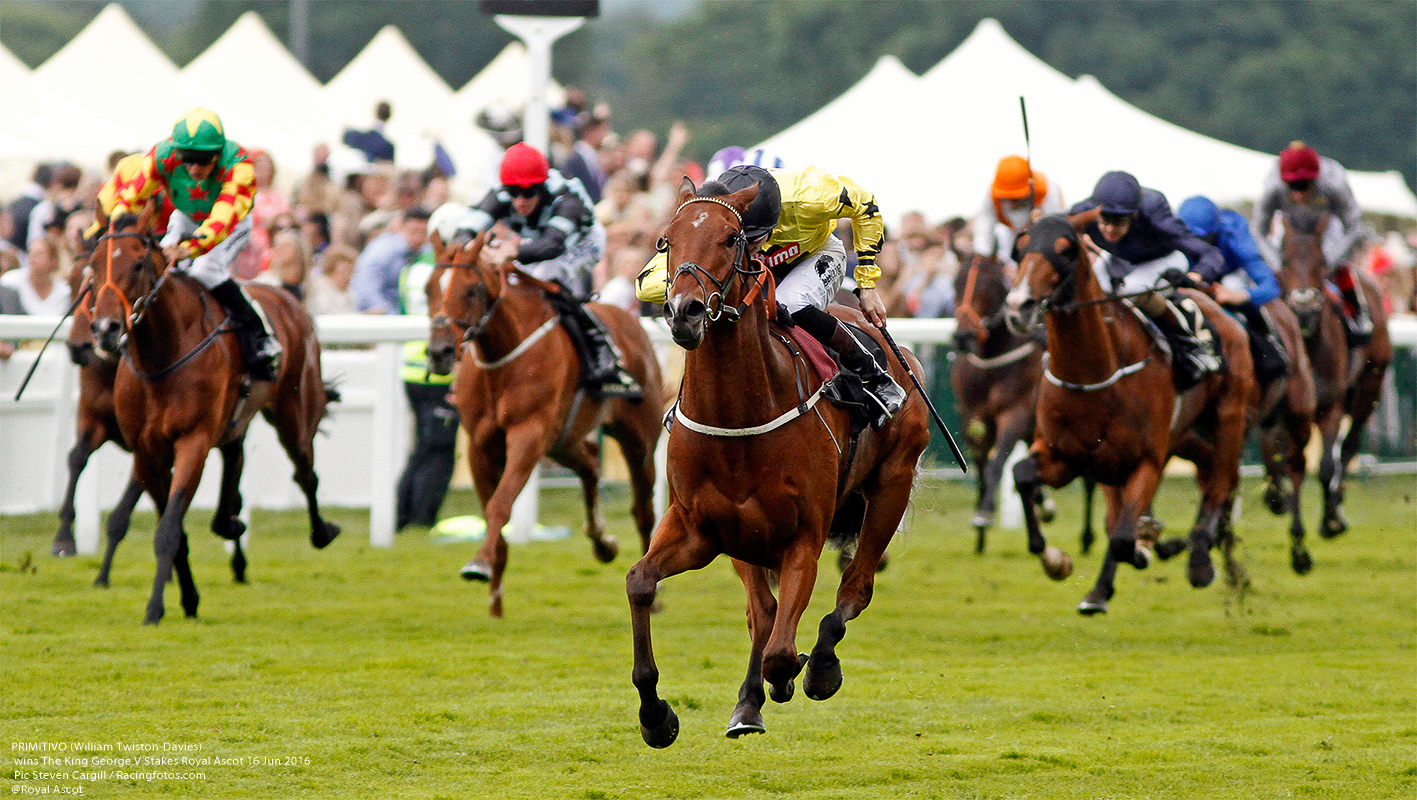 Royal Ascot 2017
(Tuesday 20th – Saturday 24th June)
The Royal Ascot week bigins on Tuesday with three Group one race.  This is BritainThe first is the Queen Anne Steaks, named after the founder. The second is the King´s Stands Stakes, the first British leg of the Global sprint Challenge. Finally the St. James´Palace Steaks, often attracting horses that have run in the English, French anf Irish 2,000 Guineas.

Wednesday, a day where Champions are Made. A more gently-paced day that nevertheless feature an exciting card and includes the group one Prince of Wales´s Stakes.

This is held by many to be The Royal´s Ascot most important race in the modern era, tough its actually dates back to 1862.
Thursday – Fashion takes centre  stage on Gold Cup Day. Thursday is the day of the historic Gold Cup. This is Britain´s most important event for stayers (horses that runs over long distances). It is also the event that launched the Royal Meeting as we Know it.
As Thousands turn out to see this coveted prize contested. It is also the day that designers creations and millinary masterpeces take centre stage.
Fiday –  A New Chapter begins. The traditional highlight of the day is the Group One Coronation Stakes, pitting the leading three-year-old fillies in Europe against each other.
With an exciting racing card including a second Group One race, the Commonwealth Cup, friday is the perfect lead-in a long weekend.
Saturday – The week´s fitting finale. Royal Ascot closes with the Diamond Jubilee Steakes: one of the world´s great international sprint races and the second British leg of the Global sprint Challenge.
It was famously won in 2012 by Black Caviar, who put her unbeaten record on the line to ensure global prestige.
Royal Ascot is Britain’s most valuable race meeting, attracting many of the world’s finest racehorses to compete for more than £6.58 million in prize money. 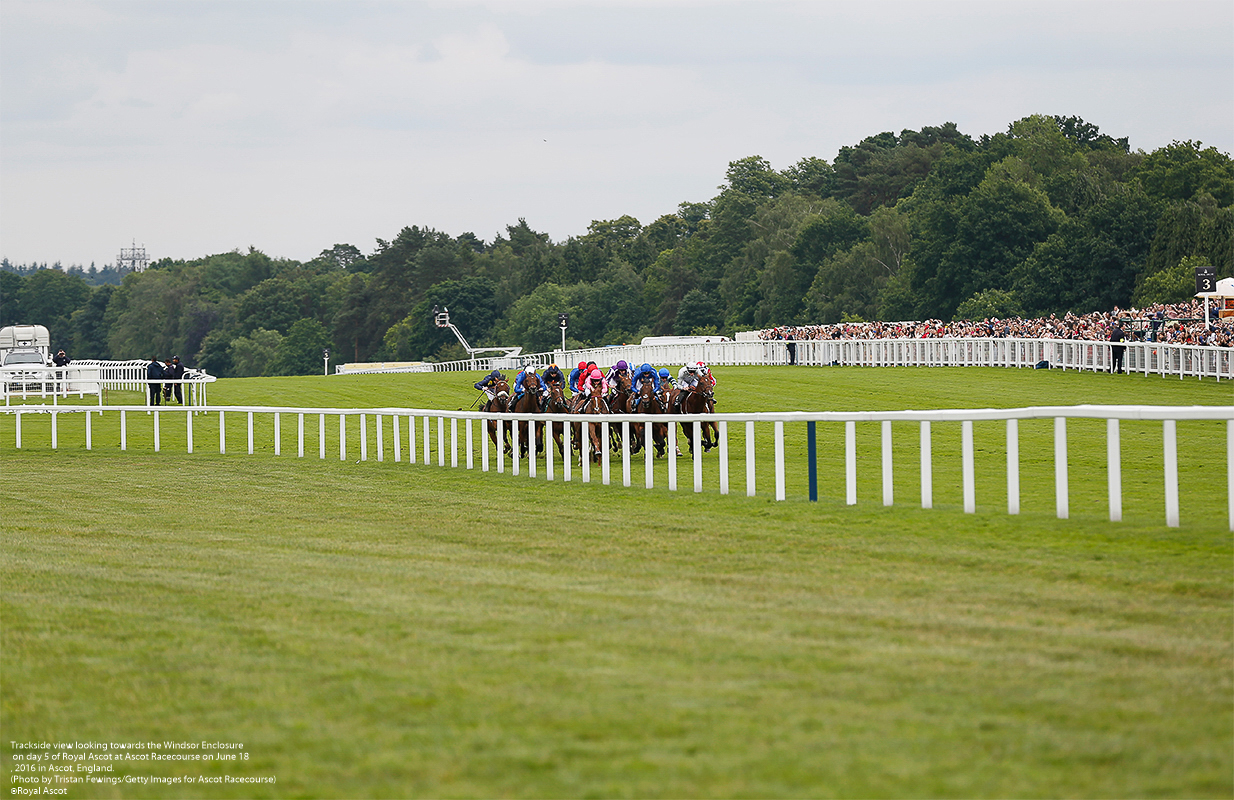 Our eighteen Group races, eight of them in Group One, have made legends of the finest thoroughbreds. Black Caviar, Frankel,Yeats – all are Royal Ascot winners turned household names.
In 2013, The Queen watched her horse, Estimate, triumph in the Gold Cup. A dedicated racehorse owner, she has attended every Royal Meeting during her reign and the Royal Procession is always an iconic moment to herald the start of every raceday.Anticipated and revered, these five days are made for socialising.
Long seen as a spectacle of fashion and style, they are referenced the world over. Each year the meeting is broadcast to audiences around the globe, yet to experience it in person is something altogether more special.
Enclosures
Each Enclosure at Royal Ascot has its own individual character, and all put you at the heart of the racing action. Wherever you are, there will be delicious food and drink, from world-class Fine Dining and hospitality to many different on-the-go options around the Racecourse.
The Royal Enclosure is widely regarded as the historic heart of Royal Ascot. Originally set aside for the running of the Gold Cup in 1807, it was a space exclusively reserved for the family, guests and Household of King George III. The Royal enclosure is a beautiful space.
Transformed entirely for the Royal Meeting. It features idyllic gardens leading on to the pre-parade ring. Guest can also enjoy exclusive access to the fourth-flour seated balcony of the Grandstand and viewing lawns that overlook the winning post.

Royal Ascot is synonymous with sartorial elegance. This is upheld by our dress code, which invites guests to contribute to an occasion heralded as a major fashion event in its own right.

Queen Anne Enclosure. On the lawns and terraces of the Queen Anne Enclosure, you can enjoy perfect views of the racing as well as numerous food, drink and betting facilities.Here you’ll be at the heart of the day’s activity. Close to the runners and riders in the Pre-Parade and Parade Ring. The Grandstand offers seating, restaurants and bars aplenty, as well as more to explore on the Bandstand Lawns.
Windsor Enclosure. Enjoy close-up views of the Royal Procession as it journeys past the stylish lawns. This is the enclosure the horses past first on their way down the home straight when racing begins.It is here that the roar of the crowd starts in earnest, creating an unforgettable atmosphere.
The atmosphere in the Windsor Enclosure is always vibrant with guests enjoying betting facilities, artisan food stalls, Champagne and Pimm’s bars, and picnics on the lawn.
From Thursday onwards, live music plays into the early evening and the whole day is often action-packed. Picnics and furniture are also available in the Windsor Enclosure.
The Village Enclosure. A Journey into the heart of the racecourse. Enjoying a spectacular perspective of the Royal Procession and experience all the action from stylish surroundings with some of the best views in the house. 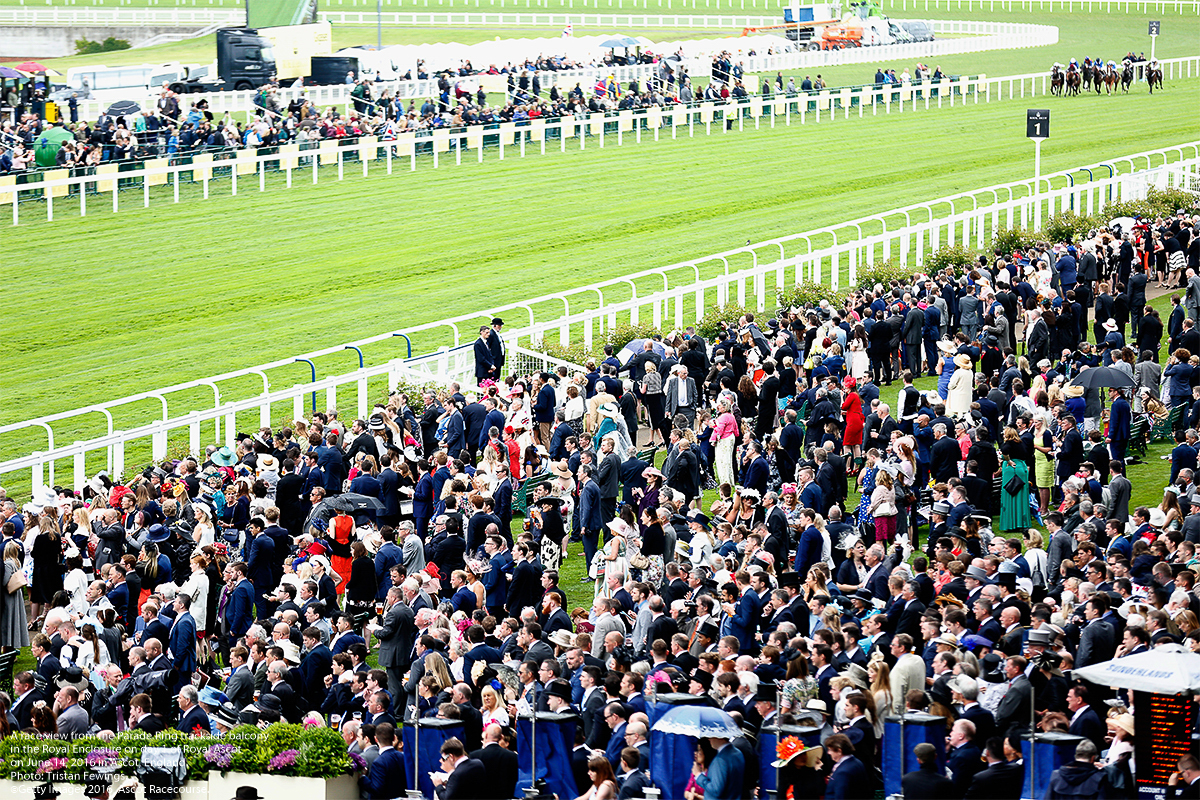 ASCOT, ENGLAND – JUNE 14: Roses inside the Queen Anne enclosure on Day 1 of Royal Ascot at Ascot Racecourse on June 14, 2016 in Ascot, England. (Photo by Tristan Fewings/Getty Images for Ascot Racecourse)

Boutique restaurants, pop-up and al-fresco dining, champagne and cocktail bars are backed by an eclectic mix of music throughout the entire day to create an atmosphere like no other. And as the sun sets, the celebration in the Village continues – with live DJs and bands extending the excitement into a long and captivating summer evening.
The Royal Ascot Express
If you or your guests are travelling from or through London, Ascot has chartered a direct train from London Waterloo to Ascot Station.The train will run directly and guarantees a seat on the outbound journey allowing you a relaxing start to the day.
The Ascot Express runs on the Thursday, Friday and Saturday of Royal Ascot from London Waterloo to Ascot, including a secured seat, racecard and free drink.
You also can come by Car,  Minicabit, Coach, Jet or Helicopter.
The Royal Ascot is one of the oldest and World´s most Prestigious Races.
©Royal Ascot
FG ART & TRAVEL INTERNATIONAL
info@fg-arttravelint.com