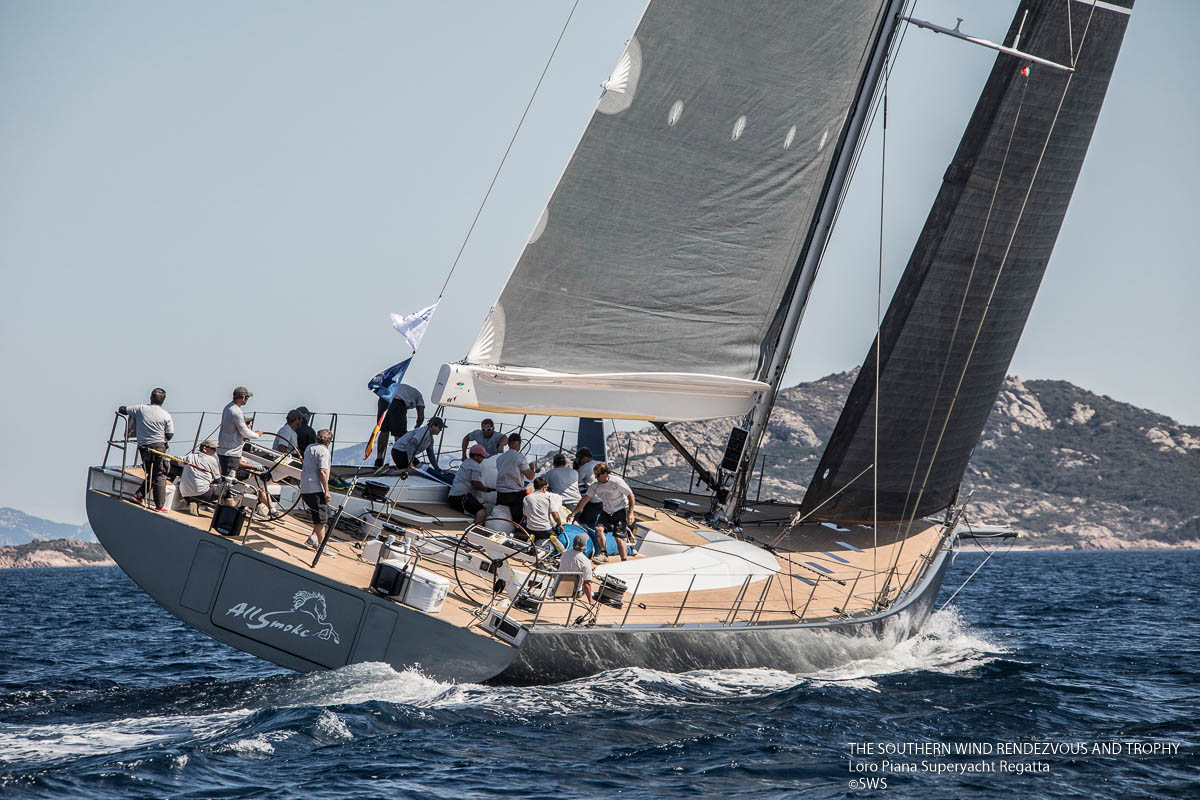 The XIV Southern Wind Rendezvous and Trophy, held within the Loro Piana Superyacht Regatta and hosted by the Yacht Club Costa Smeralda, has begun!

Eight Southern Wind yachts will be participating in this much-anticipated event that will take place from June 3rd to 8th in Porto Cervo, Sardinia.
The Southern Wind yachts, including the newly launched SW105 Kiboko III, the full custom SW-RP90 AllSmoke and the long-time rival SW82s Grande Orazio and Ammonite will be arriving to contend for the coveted Trophy while also competing with the rest of this event’s superyacht fleet. There will be staggered starts on the first day of racing, but on all other days the Superyacht Performance Class will have fleet starts for thrilling head-to-head racing.

Four more Southern Wind yachts, the flagship SW110 Thalima, the SW102 Seawave and two yachts from the famous SW100 series, Far and Wide and Padma II (formerly I-Sea,) will be congregating in Porto Cervo to shadow the fleet and join the atmosphere of friendly competition with like-minded owners.

Unfortunately, a regular at this event, the Baltic 130’ My Song owned and helmed by Pier Luigi Loro Piana, was recently lost at sea and will not be participating this year. Southern Wind and the wider yachting community will all miss a yacht that made history as soon as she was launched but look forward to seeing her owner and team dockside.

Two yachts, the SW105 Kiboko III and the SW-RP90 All Smoke are making their Mediterranean regatta debuts at the Southern Wind Trophy. While the owner of the SW105 has already raced in the Trophy aboard the second of the three Southern Wind yachts he has owned, Kiboko III was just launched in December 2018 and is new to these waters.

The full custom SW-RP90 is also making her regatta debut here. Launched in 2017, she has yet to make an appearance in a Mediterranean regatta even though her owner is an experienced sailor who has enjoyed more than one victory in the waters of Porto Cervo.

With a long string of victories in both Caribbean and Mediterranean regattas, the SW82 Grande Orazio might well be the yacht to beat at this event, while the other SW82 racing here, Ammonite, is a true embodiment to Southern Wind’s famous versatility arriving here after a circumnavigation of the world that involved crossing the Indian Ocean and has also included stop offs for important regattas such as New Zealand’s Millennium Cup and the ARC.

This Trophy and Rendezvous is a special one for Southern Wind because it’s the first to be held without our founder Willy Persico. One of the SWS yachts taking part in the Rendezvous will be presented with the WILLY PERSICO TROPHY, an award envisioned by Loro Piana and championed by Riccardo Bonadeo, YCCS Commodore, to commemorate and celebrate the dear friend and yachtsman whose passion and foresight so greatly influenced the history and future of the yachting industry.

SWS yachts competing in the Loro Piana Superyacht Regatta will also have their own final classification where the three top placing SWS yachts in the final General Overall Result will win coveted SWS Trophy awards.