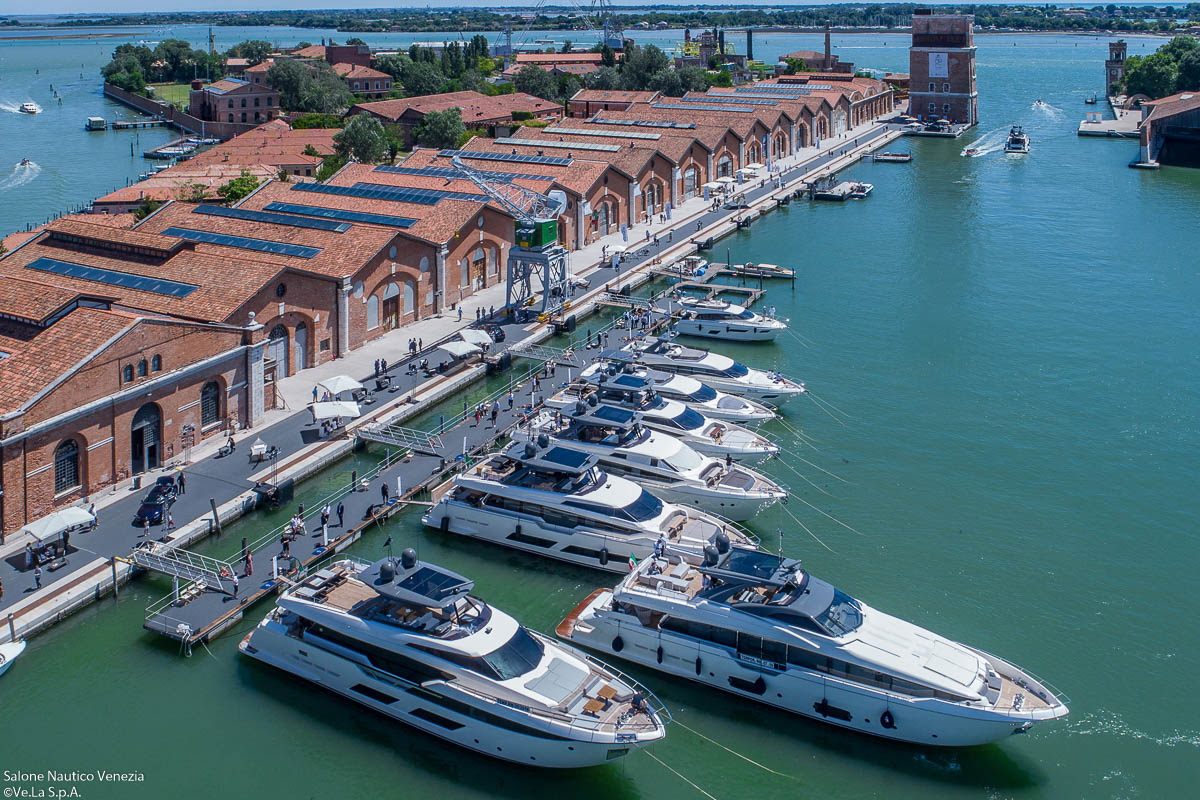 THE ART OF SHIP BUILDING IS BACKHOME

The Venice Boat Show, will be held in the areas of the Venice Arsenale from June 18 to 23.

The initiative that has been strongly supported by the Mayor of Venice, Mr. Luigi Brugnaro, has chosen the “shipyard” where ships that gave power to the Venetian Republic throughout the navigable world were built. An early example of industry, whose roots stem back to the 16th century, when the need for ships was a daily requirement.

“The Boat Show is a big challenge, which we are working on with the utmost commitment and the proposition is looking verygood-is the comment of the Mayor-The important thing is to have fun and promote opportunitiesto meet. We are interested in the City giving a signof an awakening and reconciliation with the sea, our Adriatic Sea that must be heard. I am sure it will be a wonderful show: the National Aerobatic Team of the Frecce Tricolori will be flying over on the openingday and there will be events for all age groups. We will be promoting an international competition for boat studies and projectsin the exhibition areas; explaining how ships are restored; visitors can try Venetian rowing and see the MOSE operating station; we will be organising meetings on hybrid motors/engines and some of the most modern technologies, culinary competitions, initiatives especially for children witha visit ofthe Dandolo submarine and the Naval Museum, concerts and shows that will also contaminate Forte Marghera and the entire Mainland”.

The initiative was presented by Fabrizio D’Oria, Coordinator of the Boat Show’s Technical Secretariat, who illustrated the “state of the art” of the work in progress. Along the docks of the Arsenale, boats of leading Italian and foreign shipyards will be on show, while within the Tese there will be accessories, engine systems and equipmenton show. This will all give a unique setting that modern exhibition pavilions cannot reproduce. The Arsenale will be opened to the city through the Ship Pavilion, sectionof the Historical Naval Museum, allowing access from the monumental entrance. It will be a firstcontact with navigation also through anunprecedented route “on water”.

“Our show is addressed to a catchment area whose centre has now shifted eastwards; towards customers who very often do not reach other European exhibitions. It is an important occasion for the whole Italian pleasure boating field, and I say this by emphasising that we do no twant to compete with any other show –says Luigi Brugnaro–Moreover, Venice is also the city where some of the most renowned art collectors, who are often owners of important boats, travel to on the very same days to visit the Biennaled’Arte. This also contributes to achieving an unbeatable scenario. Finally, we want to be a reference point for the many important producers in the Adriatic”.

Particular attention will be paid to the mixedworld of Venetian shipbuilding, with its different attitudes and vocations. Along with the traditional, typical lagoon boats, waterborne civil and military law enforcement craft including several ships will also be on display, testifying the great collaboration that has been established with all the authorities and especially with the Navy, represented by Admiral Andrea Romani, who said:

“we have been supporting this project since its initial stages. The Navy is fully engaged in fulfilling this initiative that will allow to enhance the ancient Arsenale in a perspective linked to the activities of the nautical sector and, more generally, to the activities of the sea, respecting its history and the symbolic connotation of Venice and maritime transport. During the Show, our Naval Base will be open to the public and the Naval Museum display will be expanded, making it possible to visit the Dandolo submarine thanks to the collaboration with Vela and the Fondazione Musei Civici di Venezia (Civic Museums Foundation)”.

The presentation included the participation of Mr.Alberto Galassi, Chief Executive Officer of the Ferretti Group, one of the first to believe in Venice as an exhibition venue:

“if there’sa place in Italy that can compete with Montecarlo for standing and environment it’s definitely Venice. I have long believed in it. Lastyear we celebrated the Group’s 50th anniversaryhere and we are back for the presentation of our newproducts. I also suggested to our competitors to participate “.

The Venice Boat Show logo includes the lion of the VenetianRepublic and the V of Venice: if St. Mark were the political heart, Rialto the commercial soul, the Arsenale was not only the military place and watergate of the city, but it symbolised the western defence of our culture and of Europe. In this regard, there will be numerous collateral initiatives that will keep the cultural content of the event high in various rooms and spaces of the Arsenale.

The Spazio Incontri (Meeting Space) will open on Wednesday June 19 with a conference on designt hat has already been confirmed by designer Carlo Nuvolari, Luca Bassani, inventor of the Wally Yacht brand and professor Carlo Fei, a professor in Fashion Management at Luiss of Rome.

“there is a new luxury of seafaring, a vision that is closer to passion and emotions. One of the best ways to manifest this is to arrive in Venice by sea, as the travellers of the past centuries did, remaining enchanted by the embrace of the monumental entranceto the city”.

Even visitors to the show can arrive by sea with their boats, mooring in one of the various marinas that have collaborated in creating this show. Design will not be the only theme: we will talk about the environment, fishing, tourism and fishing, safety and navigation with the collaboration of CNR-ISMAR, Tethis, Coast GuardandAssonautica.

“We will be present to support the initiative,”saysRear Admiral Piero Pellizzariof the Direzione Marittima del Veneto edella Capitaneria di Porto di Venezia(Veneto Maritime Directorate and of the Port Authority of Venice), “central to developing all aspects related to pleasure boating. Our people and our experience are available in particular as regards regulations and navigation safety “.

One of the collateral initiatives is the competition “Venice Boat Show: International Call for Selection of Boat Projects”, organised by Fondazione Musei Civici di Venezia(Venice Civic Museums Foundation)with the Municipality of Venice and Vela Spa. The works selected out of over seventy participants, will be exhibited inside Tesa 113 of the Arsenale, where a series of cultural activities related to design and nautical culture with different guests will also take place.

“The Boat Show -concludes Mayor Brugnaro-has already been funded for the next three years. We must believe in it and make the greatest possible contribution to its success because it represents an opportunity for future generations. I thank all those who are working hard day and night,striving to implement this important event: the Municipality of Venice, Vela Spa and all the participating companies involved, the city’sinstitutions, associations, rowing clubs. And, on behalf of the city, I would like to thank Alberto Galassi, CEO of Ferretti Group, one of the largest Italian industrial groups, who strongly believed in this project. I believe that it is a duty for the country to considerthat Venice can give a future life, work and prosperity to the whole Adriatic area”

The seat of the Exhibition is the ARSENALE, a symbol of the “Serenissima” Republic power and military prowess, the heart of its naval industry

An incomparable, historical context in the centre of Venice, made of a water basin (50.000 sqmetres) and pavilions, with approximately6.000 sq metres of space.