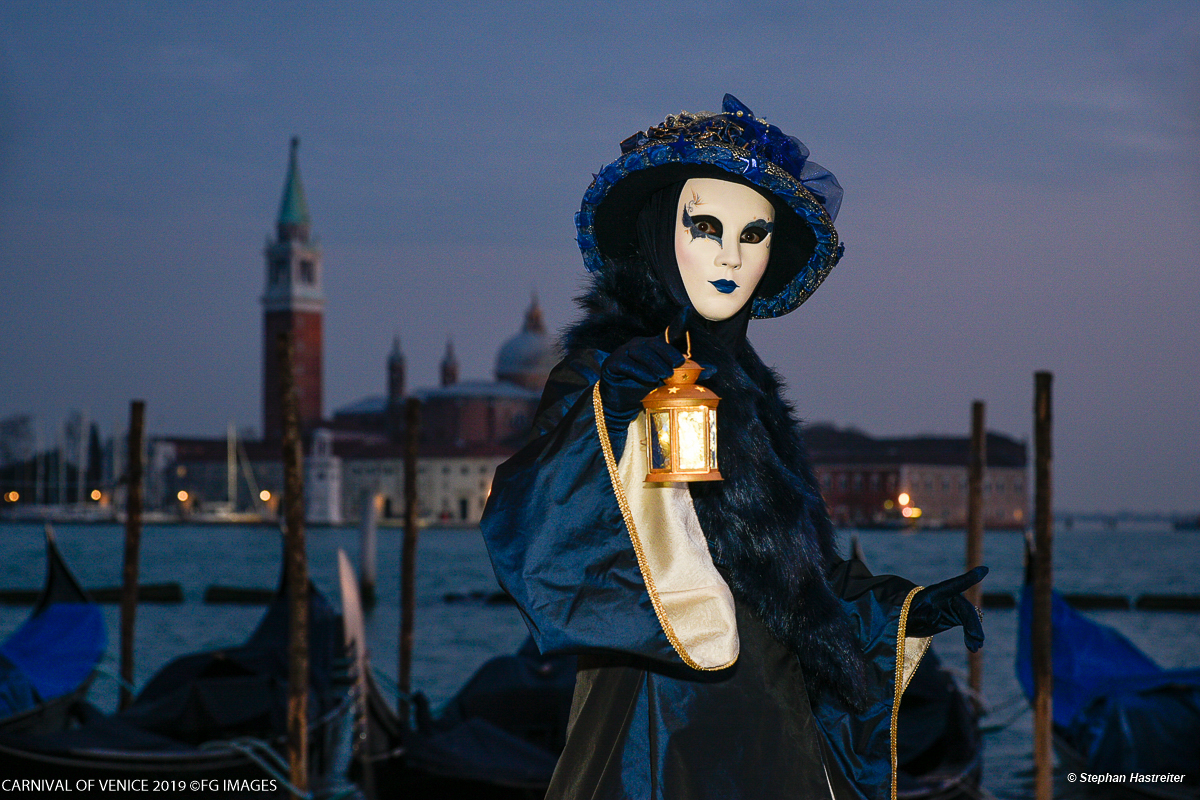 CARNIVAL OF VENICE 2019 – BLAME THE MOON

Fifty years after the moon landing, the Venice Carnival is inspired by the Moon and, looks up at the infinite sky, at the stars and their seductive myths. A bestiary of legends, myths, heroes and characters between dreams and reality is preparing to invade Venice and the mainland, hiding behind the Shakespearean motto:

“Blame the moon, when it gets too close to the Earth it makes everyone crazy”.

Because the Moon, with its different phases, has the same principle as the masked figures: it shows itself unveiled, but wears the sunlight’s noble dress, which makes it shine. To us it appears varied and mutable, but it is always its same old self. It is the great actor of the Vault of Heaven, bold and moody, a traitor: when it wants to fascinate us, it blushes.

The Moon is the Carnival: with its phases, it is the guide of biological rhythms and reminds us of the passing of time, of birth, adulthood and death. But its death is never final and just like Carnival it returns each time to make us crazy, us poor primitive creatures waiting for the next full moon.

The Carnival, scheduled from February 16th to March 5th on Shrove Tuesday, will allow the public to discover new worlds, spangling with fantasy, with dreamlike and science-fiction journeys and dimensions.

The Carnival’s grand opening on Saturday, February 16, with the first part of the Venetian Festival on Water: an exciting and spectacular water show, on Rio Cannaregio where water monsters and fantastic creatures set the festival’s mythology free, the first show is at 7 pm and the second one is at 9 pm

From February 23 to March 5, St. Mark’s Square will become an extraordinary platform for visionary mask parades, shows that are out of this world and cosmic music.

On Sunday, February 24 and Sunday, March 2 there will also be the flight and landing of the Angel and the Eagle and the svolo del Leon (the Flight of the Lion) along with some surprises! On Saturday 23 the 12 Marias selected for the 2019 edition will parade on stage, on Thursday, February 28 the “Ballata del toro” (“Bull’s dance”) will take a leading role and on Friday, March 1 Nicolotti e Castellani will fight with “el carneval e signori della notte” (“the carnival and the men of the night”). The masks will challenge each other every day on a stage designed by Massimo Checchetto, the art director of Teatro la Fenice and the most beautiful mask will be voted on Sunday, March 3. Music will be played every evening from 6 pm with the suggestions from Home Venice for Red Bull.

Out of this world

Cosmic Invasions of art and shows for the city

The third edition of Mestre Carnival Street Show celebrates the 2019 Venice Carnival with its Grand Opening on Sunday, February 17 at 5 pm with an original parade that will bring new otherworldly images to Piazza Ferretto.

From February 23 the effect of the moon landing on Mestre will start, when extravagant artists will begin to land from parallel universes to invade the city and the Stage in Piazza Ferretto with art works and wonders of all kinds, including an extraordinary playground that will put even the most skilled scientific minds to the test.

There’s a packed schedule of Concerts, Shows and popular Art in the City streets every day from 4 pm to 7:30 pm (and from 11:30 am to 1 pm on Sundays) Wonderful alien installations will be able to show you the way to the several show-points.

Besides the rich schedule of shows and the Flight of the Donkey on Sunday March 3, this edition of Mestre Carnival Street Show will also work together with the Festival Show, which will carry out auditions for the 2019 tour on the stage in Piazza Ferretto.

Along with the colourful and well attended parades in Marghera (Saturday, March 2) and Zelarino (Tuesday, March 5), the 2019 edition has two new parades. One in Campalto, where there will be a much-awaited parade on the afternoon of March 3 and one in Lido di Venezia on Friday, March 1 in the Gran Viale during the afternoon.

A city celebrating Venice Carnival with spontaneous initiatives promoted by the territory’s associations from the Carneval de Casteo to the Malcontenta Carnival, numerous initiatives in Rialto Pescheria to the ones in the squares of Marghera, proposals from the main Dorsoduro Camps,  the Santo Stefano market, the initiatives at Murano, Pellestrina, Malamocco, Favaro, Piraghetto Park and the rowing challenges with the columbine regatta on gondolini boats and the Carnival sprint regatta on the caorline boats right up to the carnival nights dedicated to youngsters with the Arsenale Carnival Experience

With its Cultural Programme, the Venice Carnival once again becomes a hotbed of creativity and artistic production generated by the vital community of cultural institutions, of artists’ associations that revolve around the lagoon city. Eight days of events, covering the entire period of the manifestation, from February 16 to March 5, and an offer spread between the historical centre and the mainland. Part of the big web of the show will be the Ducal Palace, the Correr Museum, the Querini Stampalia Foundation, the Peggy Guggenheim Collection, the Naval Museum with the Ships’ Pavilion, the Venetian University, the M9, The Candiani Cultural Centre, del Vedere’s Factory and many other places, which will be animated by the Carnival’s creativity. Plays, concerts, movies, exhibitions, guided tours, labs and playful educational activities for children. Palace theatre, performances, installations and events give the festival meaning expressing the chosen theme for this edition of Carnival, the tribute to the Moon, fifty years from the moon landing, and in general, they look further into the inextricable relationship between the Carnival, Venice and the culture that has been spread and consolidated over the centuries.

Original projects created specifically in, and with, the city’s cultural circles, co-promoted by Vela and supported by the City of Venice to offer numerous events every day, which are almost all free or at extremely affordable prices.

The invitation is for the people of the Venice Carnival to take back the areas and let themselves be seduced by the stories that have been created to liven up the cultural line-up of the festival.