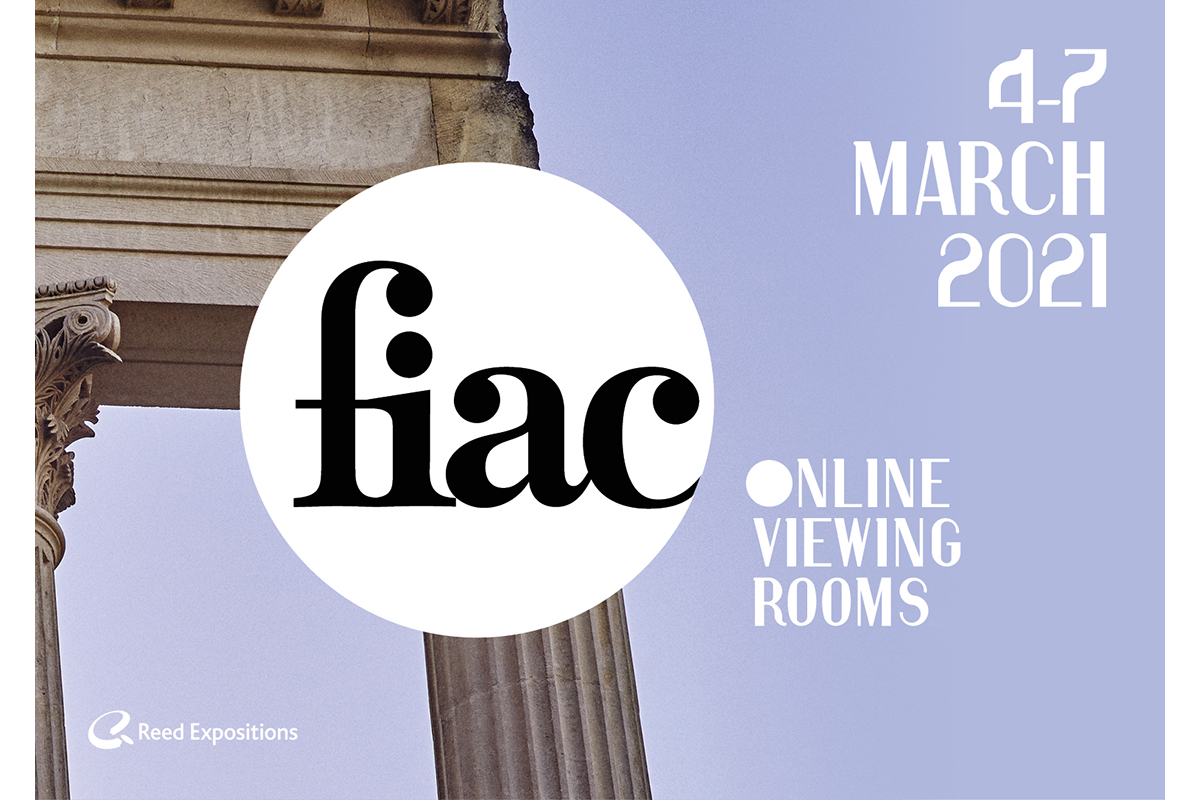 has secured widespread participation from French and International Galleries 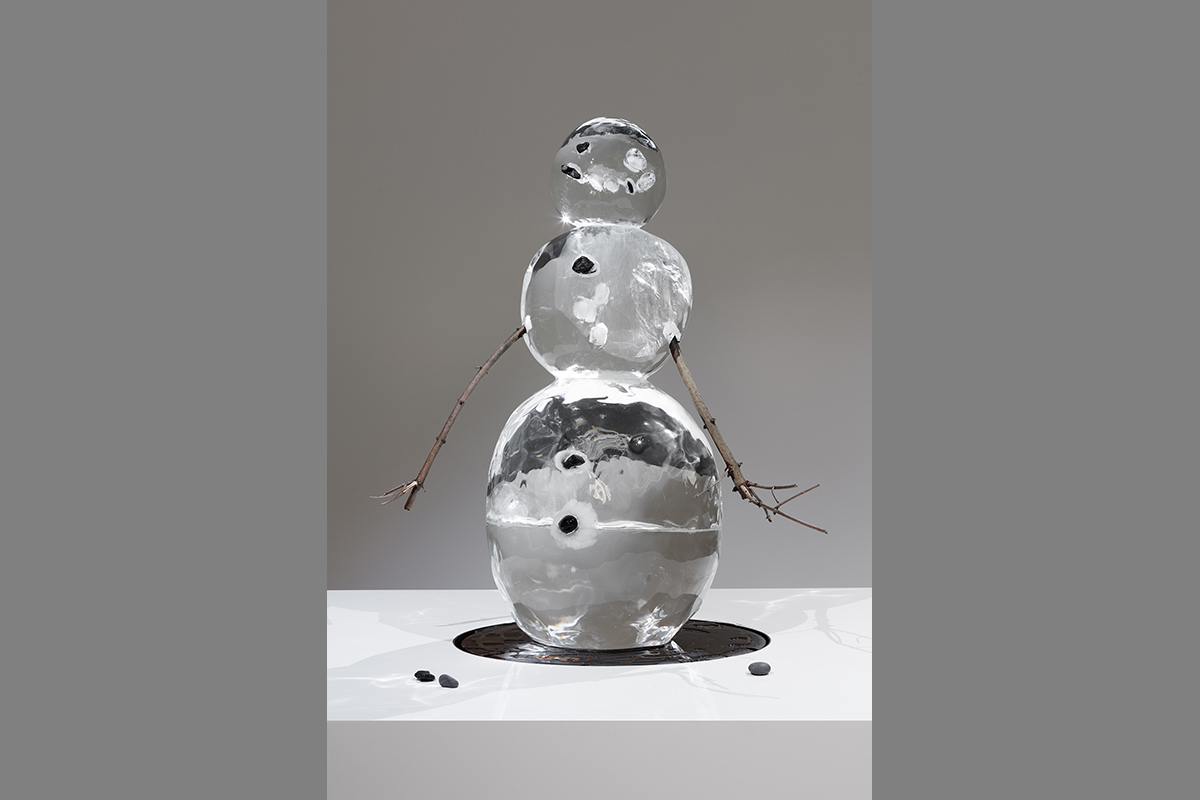 -A user-friendly, simple and purpose-driven platform developed in collaboration with Artlogic, the industry leader in digital technology for the art world 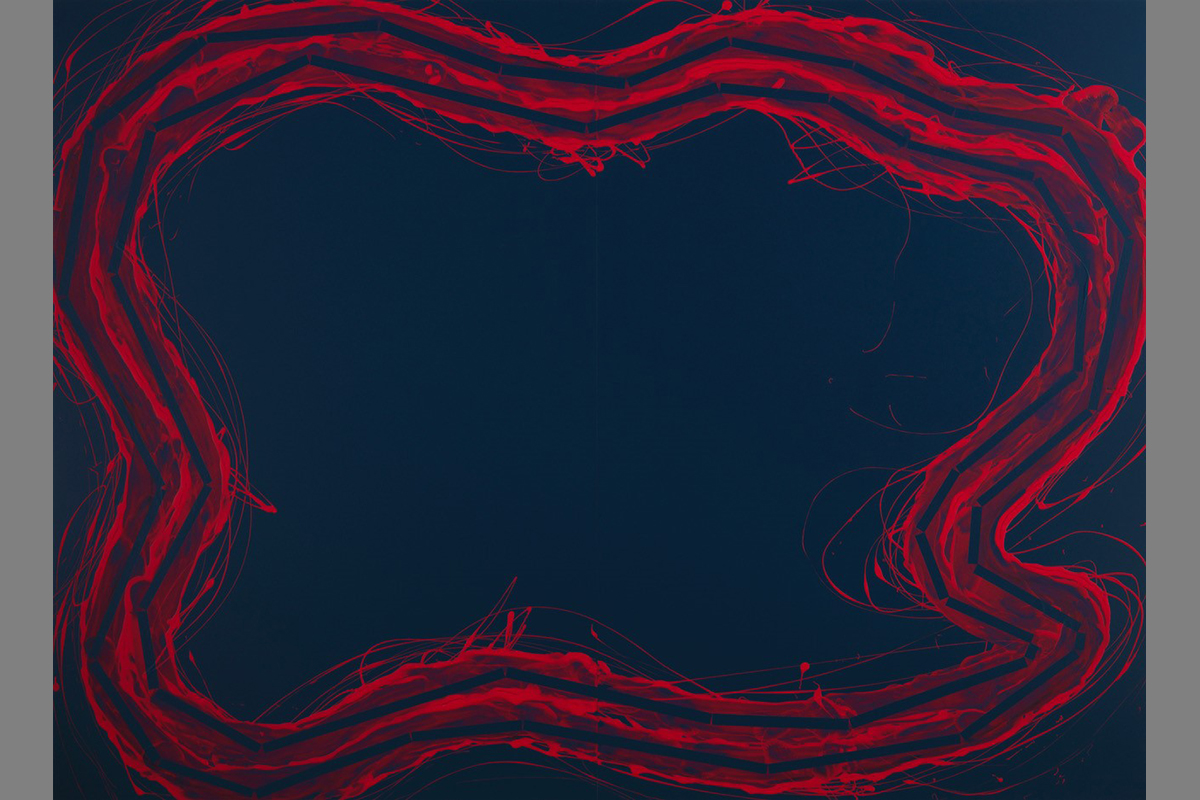 Designed to be dynamic, ergonomic, playful and purpose-driven, FIAC Online Viewing Rooms creates new connections between FIAC’s visitors, galleries across the world and the artists they represent.

Galleries can show 5 or 10 works, and are able to enrich their presentation with visuals showing works from various viewpoints and with videos. Galleries can change their online display throughout the fair. 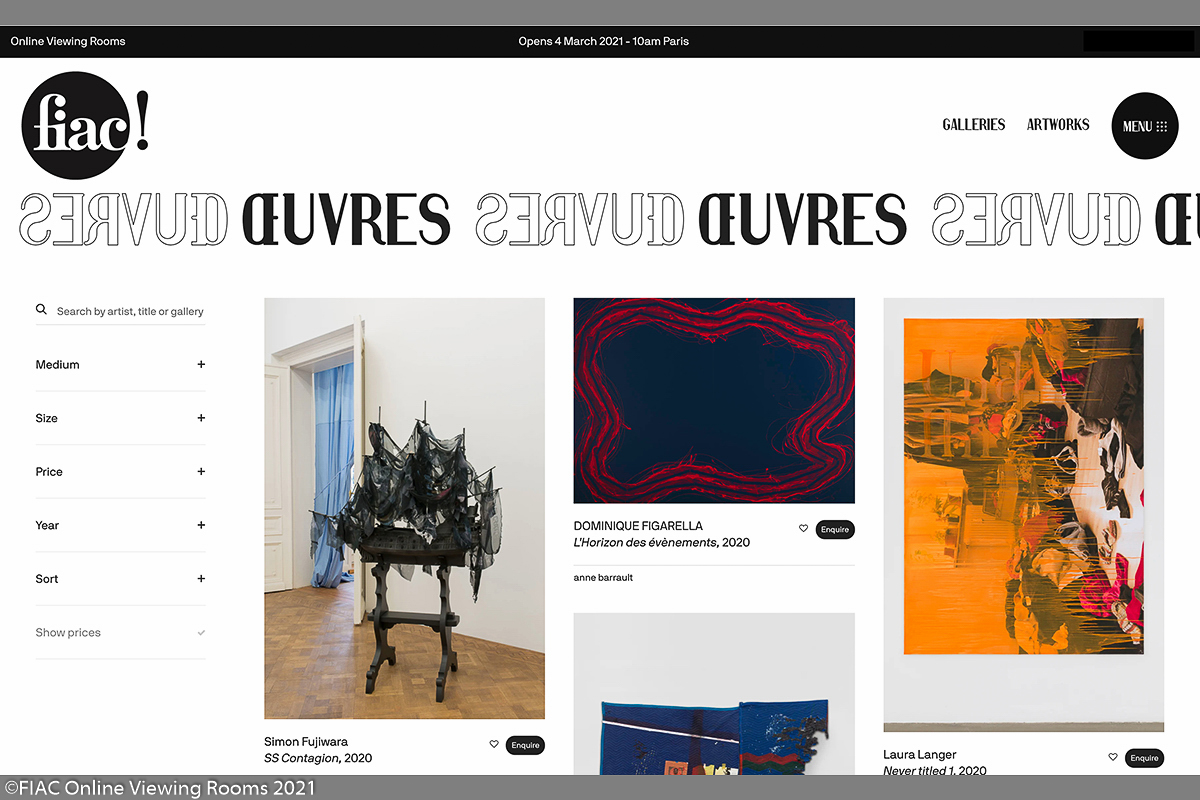 The works can be viewed to scale in the environment of the Grand Palais thanks to the View on a wall feature.

Professionals, collectors and art lovers can access all the gallery spaces and their presentations through an intuitive navigation experience. Filters and selection criteria allow users to make refined searches. They also have the possibility to add artworks and galleries to their favorites.

Additionally the platform allows visitors to let themselves be surprised with the aleatory propositions of the Chance Encounter feature. 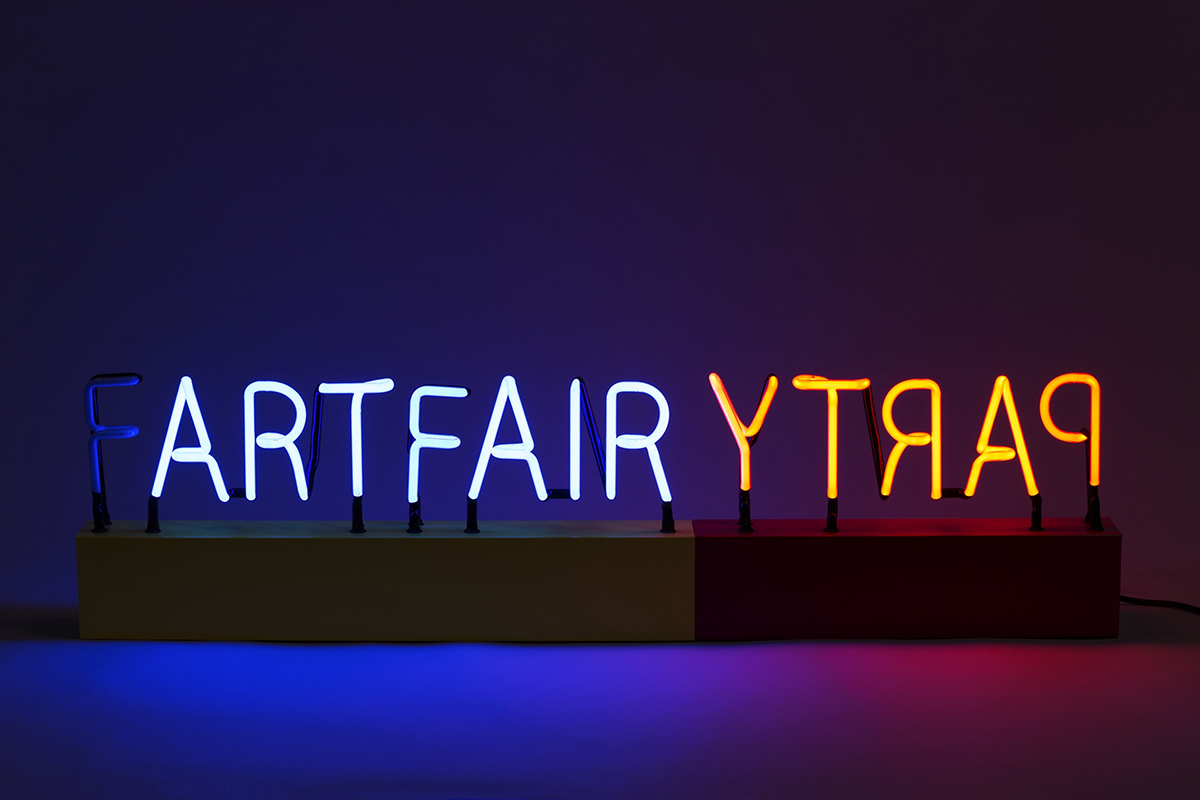 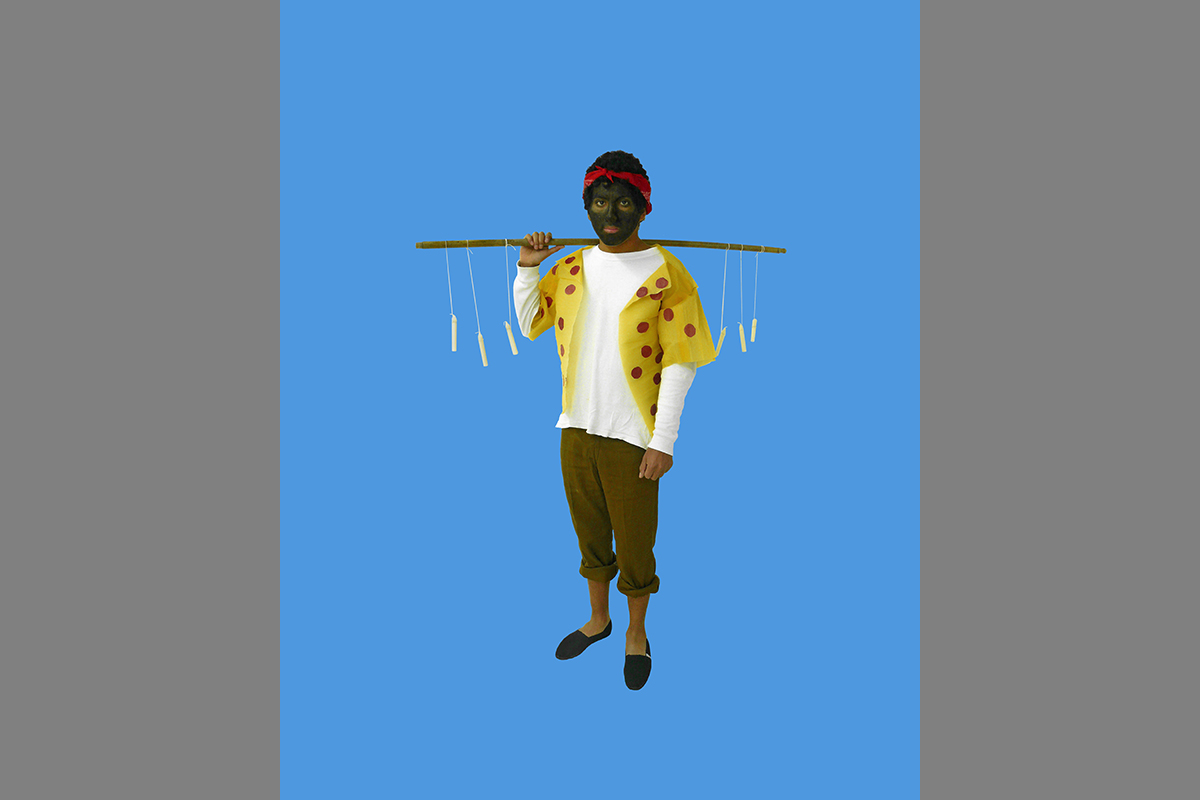 INVITED CURATORS–THROUGH THE EYES OF FIAC

“Whether “face-to-face” or not, any choice is a commitment to an imperfect cause. So I decided, or took it upon myself –whichever you prefer – to select only fifteen artists from the French scene and, what’s more, these artists are not (yet) present in our collections. The list will be surprising and even surprised me! So it just goes to show that the attraction of an artwork is stronger than any prejudice. Who could complain about that?”

“The artworks that I’ve picked from FIAC Online Viewing Rooms to share with you, speak to notions of the self, biographies or personal histories both past and present or sites ancient and imagined.”

“This online meander through FIAC inspired the beginnings of two imaginary exhibitions. The first, Surréalité, a dreamlike interlude that could be deployed within a psychedelic fictional manor, such as Ramin Haerizadeh, Rokni Haerizadeh, and Hesam Rahmania’s castle of obsessions, haunted by Lois Weinberger’s Green Man, Apichatpong Weerasethakul’s ghosts, Dorothy Iannone’s ecstatic lover, Peter Saoul’s funky painter, or Jakob Lena Knebl’s polymorphic bodies. (…) The other Réalitéis torn off like the ephemera in Leigh Ledare’s Double Bind, in which (…) the artworks of Anne Imhof, Miriam Cahn, and General idea become the vibrant seismographs of an unstable reality (…).” 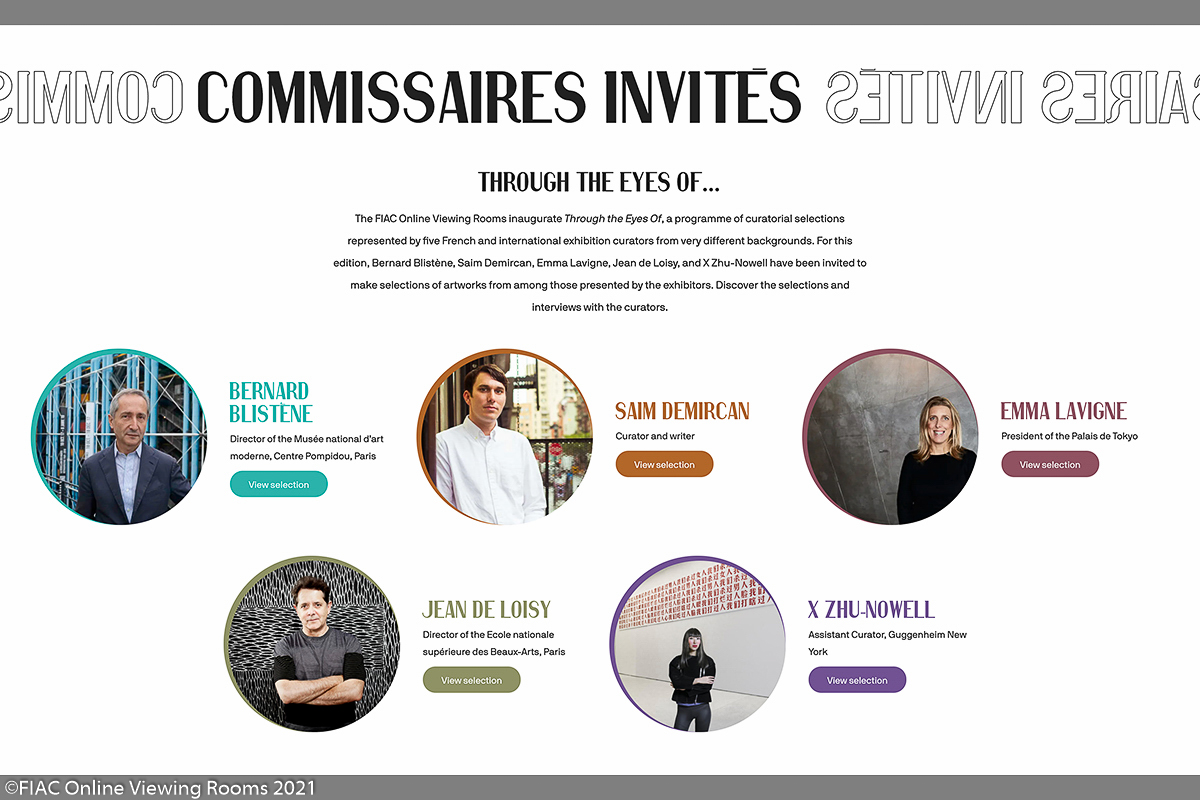 “Visit FIAC, bump into some friends, discover unknown artists, surprise yourself with the array of sublime works to covet, explore galleries from countries rarely visited, hone the finesse of the gaze with one exhibitor or another, approve of their loyalty to some artists that we see less often and their intensity with respect to some newcomers who have earned their trust.”

“If we consider an artwork a thing that inherently contains various sets of relationships, constellations of ideas, ways of making, and genealogies, then my work here is to suggest a few connecting threads that weave through these already overlapping and interconnected worlds. My selection of works for FIAC doesn’t follow an overarching theme, logic, or historical narrative, but there are a few running themes that connect different artist practices and strands of thinking with each other.”

Conversation Room launches a carte blanche programme extended to institutions for the FIAC Online Viewing Rooms. High-calibre French and international institutions are invited to participate in this platform of discussions, hosting dialogues and interactions on subjects that invigorate and inspirecontemporary creation. Discover the conferences presented by the Bourse de Commerce –Pinault Collection(Paris), the Museo Tamayo (Mexico), M WOODS(Beijing), and the Petit Palais (Paris). 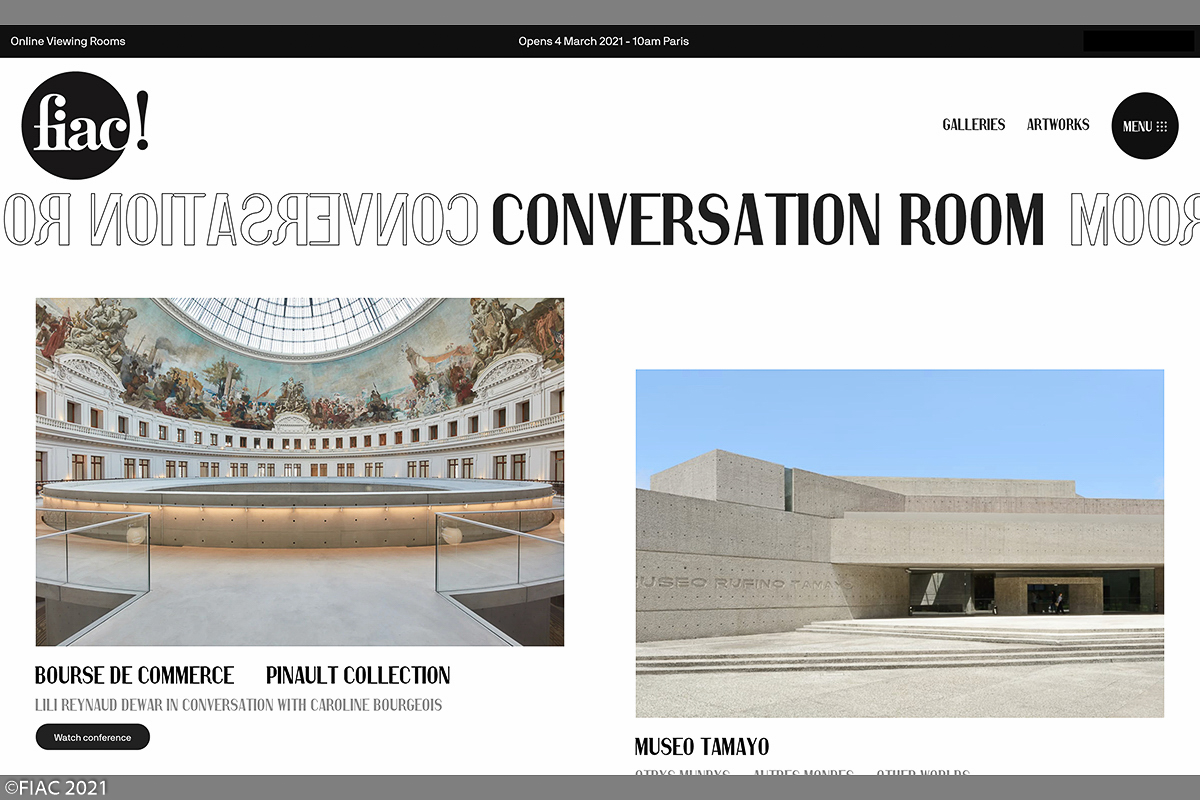 Within the framework of its upcoming opening to the public, the Bourse de Commerce –Pinault Collection is organising an encounter with French artist and performer Lili Reynaud Dewar, in conversation with Caroline Bourgeois, the curator of the Pinault Collection. Together, they discuss her singular and multidisciplinary art practice, her collective projects –notably with students –aswell as the environments she creates and occupies. They also talk about the subjects and figures that inspire her, such as Josephine Baker, Donna Haraway, and Guillaume Dustan.

Join Museo Tamayo’s Director, Magalí Arriola, for a conversation with artists Paloma Contreras Lomas, Miguel Calderón, Romeo Gomez López, included in OTRXS MUNDXS, and Humberto Moro, curator of the exhibition currently installed at Museo Tamayo. Departing from this survey exhibition presented in the middle of a global pandemic, the conversation revolves around individual and collective creation and the everchanging tensions between the local and the global, with special emphasis of the Mexican art community of the past decades.

In the third part of their conversation, Hsieh and Wang continue to discuss Hsieh’s ideas on time and his influential One Year Performances that Hsieh began in the late 1970s, art survival, concepts of duration in art, the importance of separating art from the person, Hsieh’s proposal for a career retrospective, as well as a series of topics around isolation and togetherness that Hsieh and Wang had in April of 2020, when they were both in coronavirus lockdown in their respective cities.

In the rooms of the exhibition Edition limitée. Vollard, Petiet et l’estampe de maîtres which the Petit Palais dedicates to the publishing ventures of two major art dealers of the twentieth century –the visionary Ambroise Vollard and his spiritual successor, Henri Marie Petiet –Yvon Lambert presents his own background as a publisher.

Just like Vollard before him, Yvon Lambert continued, after the closure of his gallery, to devote his time entirely to his passion for the publication of bibliophile books in limited editions. While his predecessor had chosen Pierre Bonnard, Pablo Picasso, or Georges Rouault to illustrate his publications, Lambert works with Anselm Kiefer, Giuseppe Penone, Adel Abdessemed, and many other renowned artists. Since 1992, his books have also been established as references among art lovers and collectors, writing a new page in the history of art publishing. 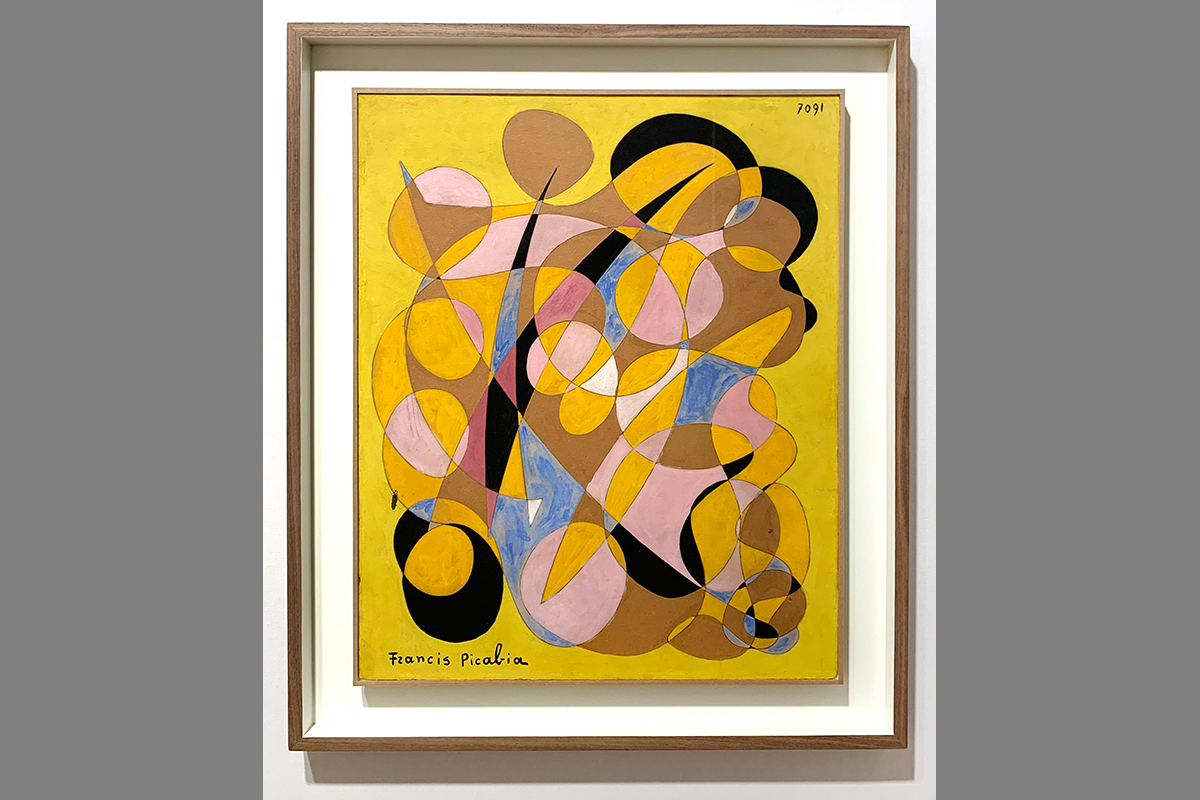 Professionals, collectors and art lovers can discover an exacting selection of modern and contemporary art galleries, among the most emblematic of the international scene: 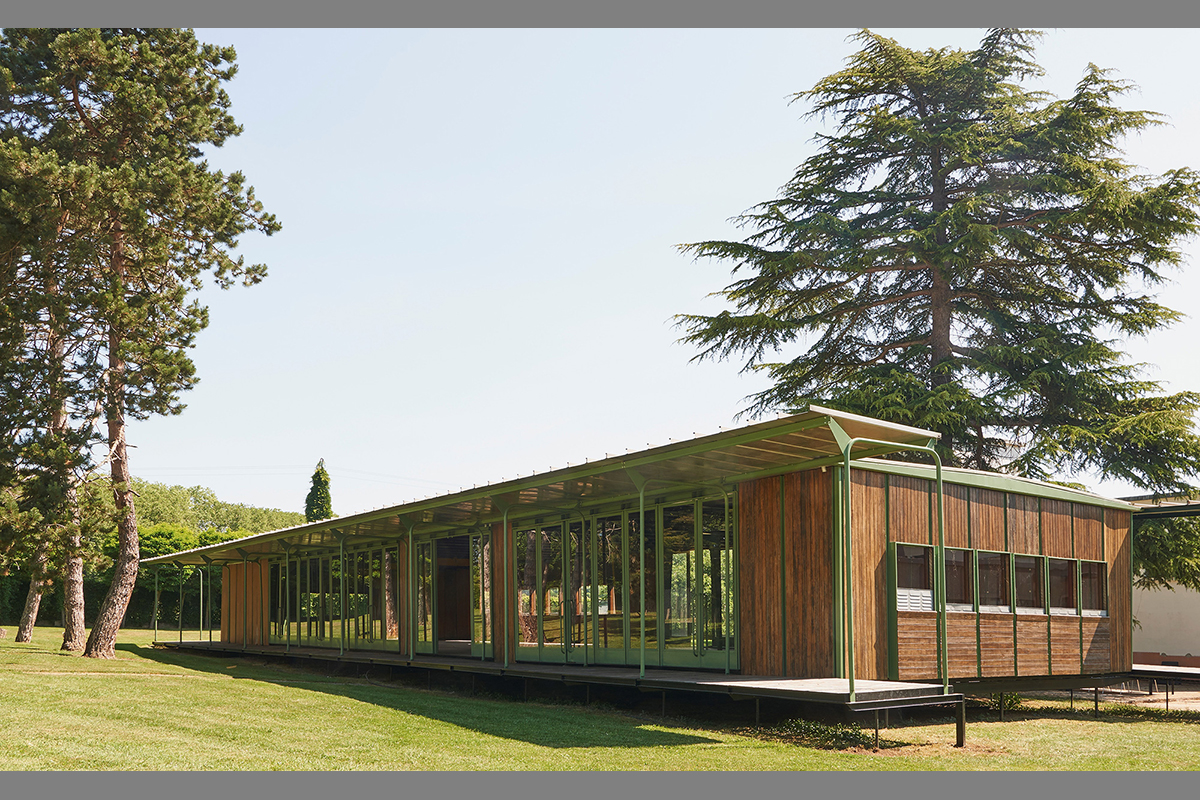 Design is present on the platform with our historical exhibitors, specialists in Modern and Contemporary Design and Architecture:

Galleries specializing in Editions and Multiples 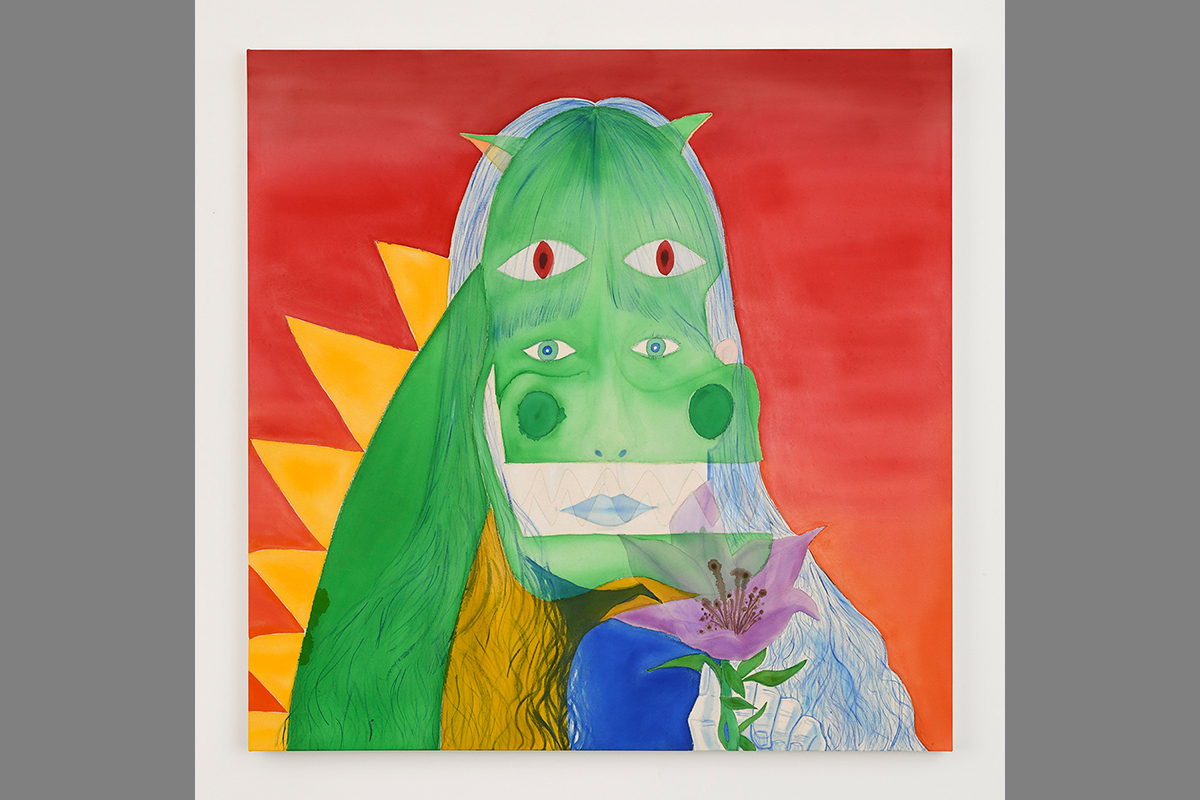 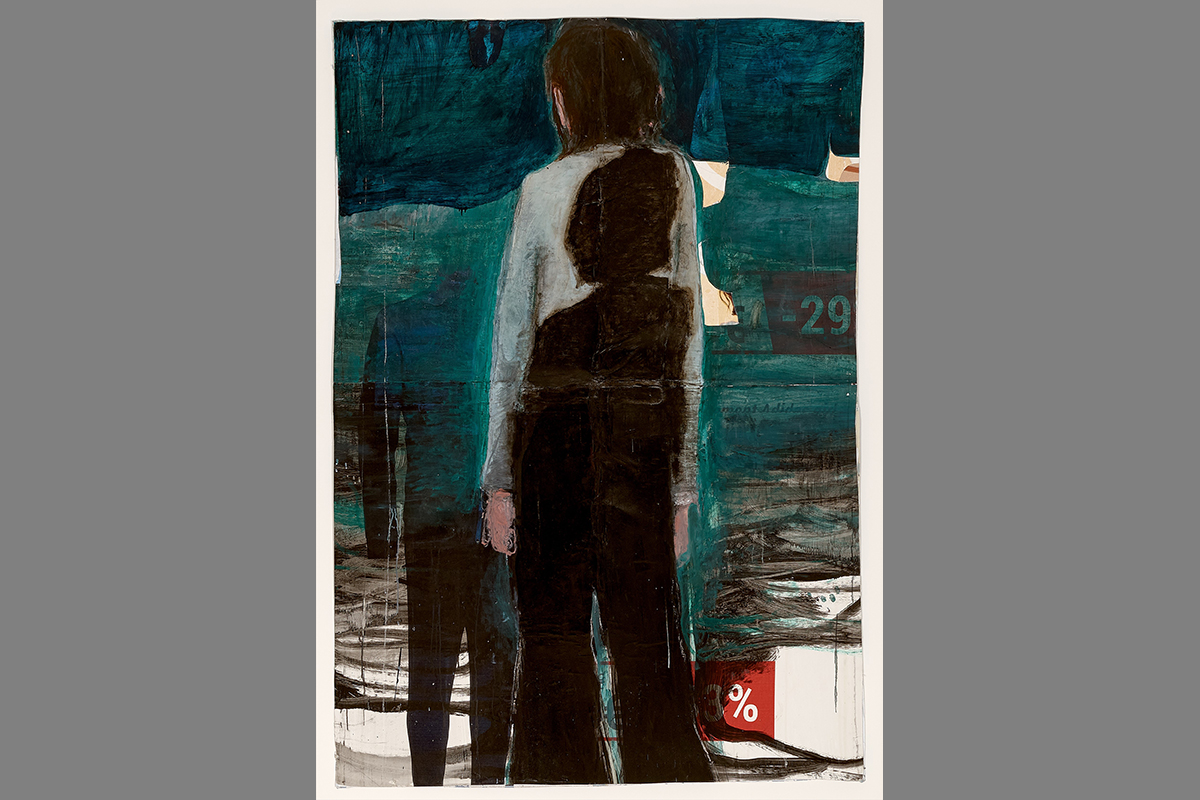 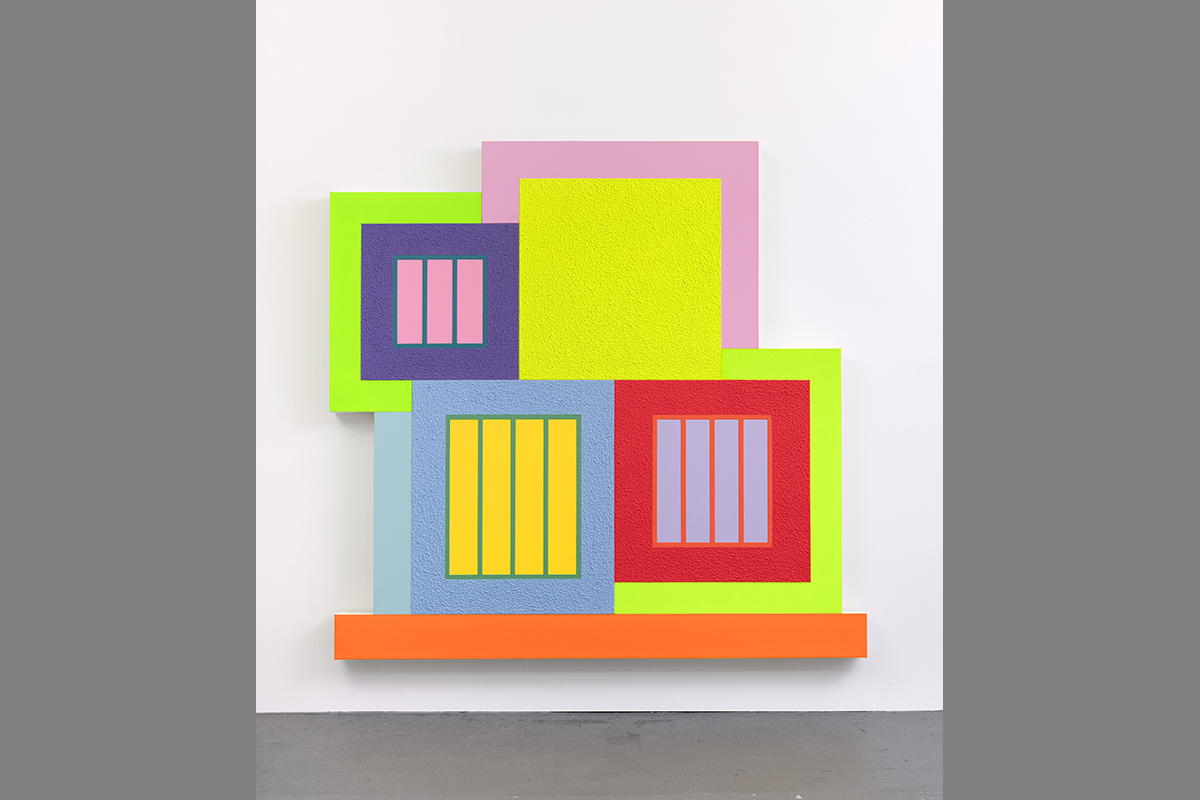 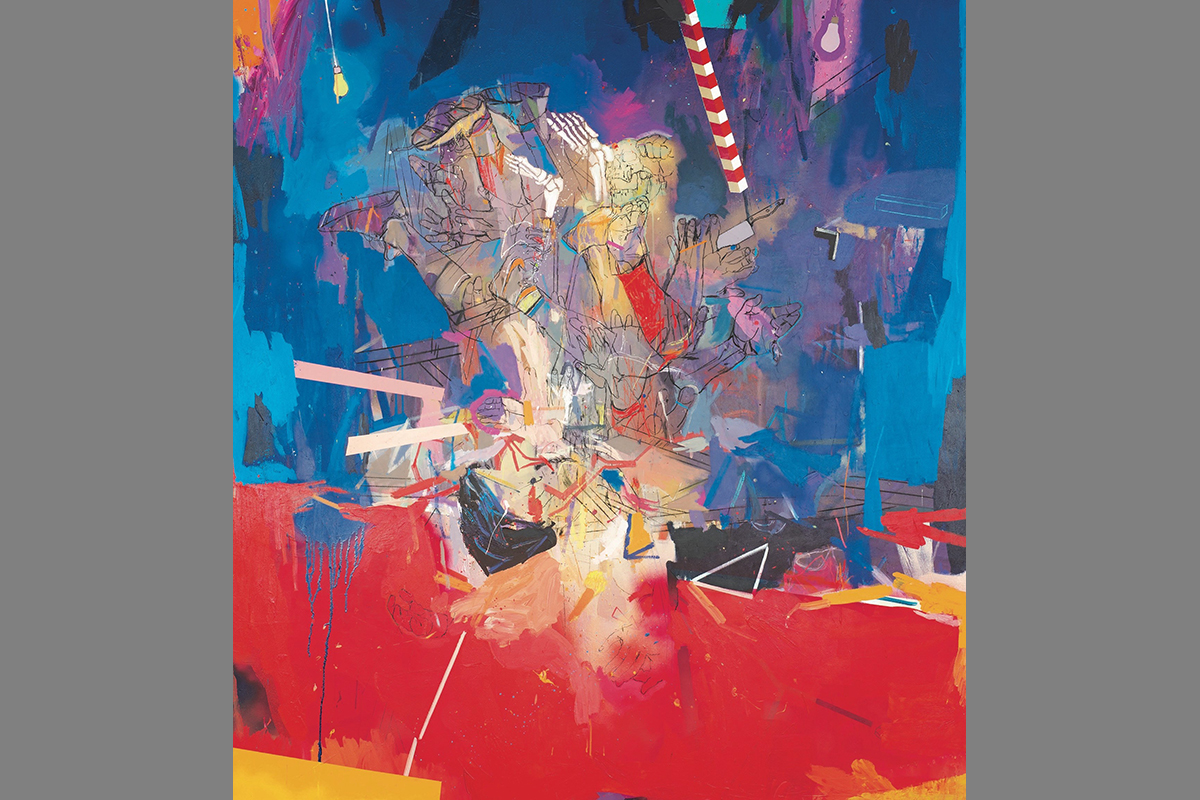 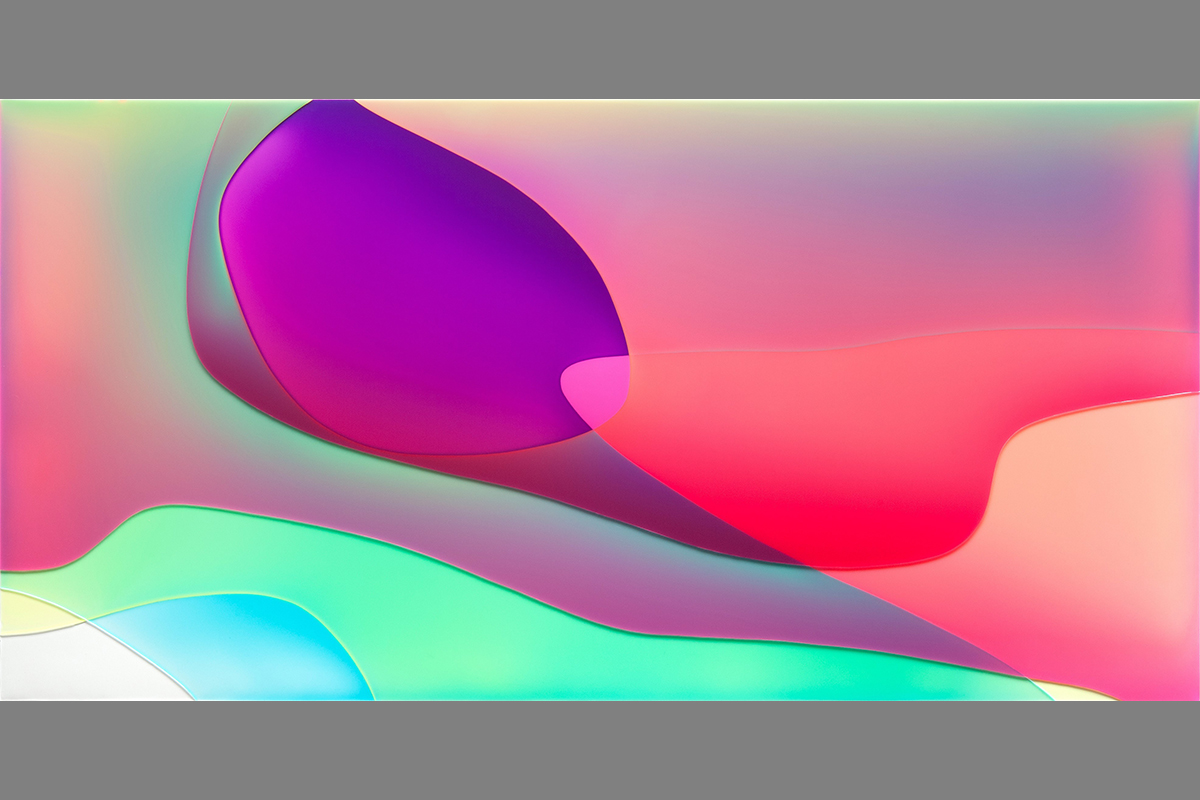 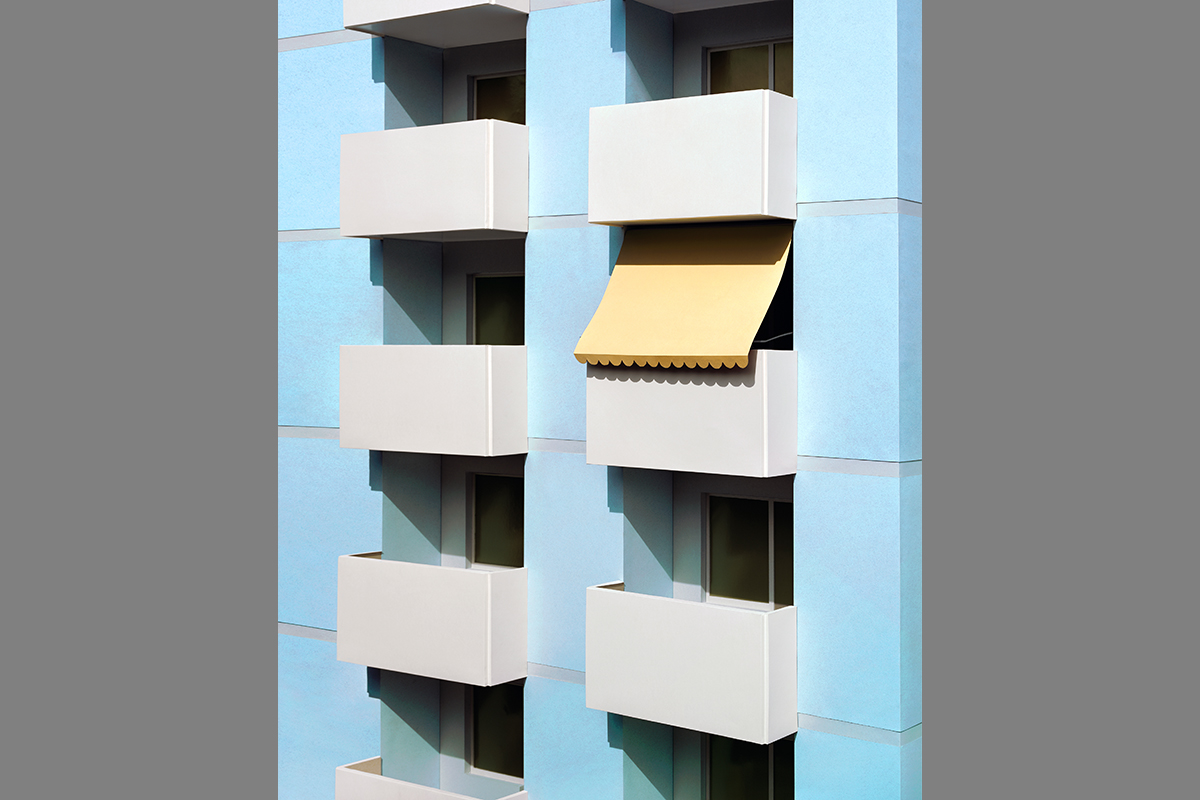 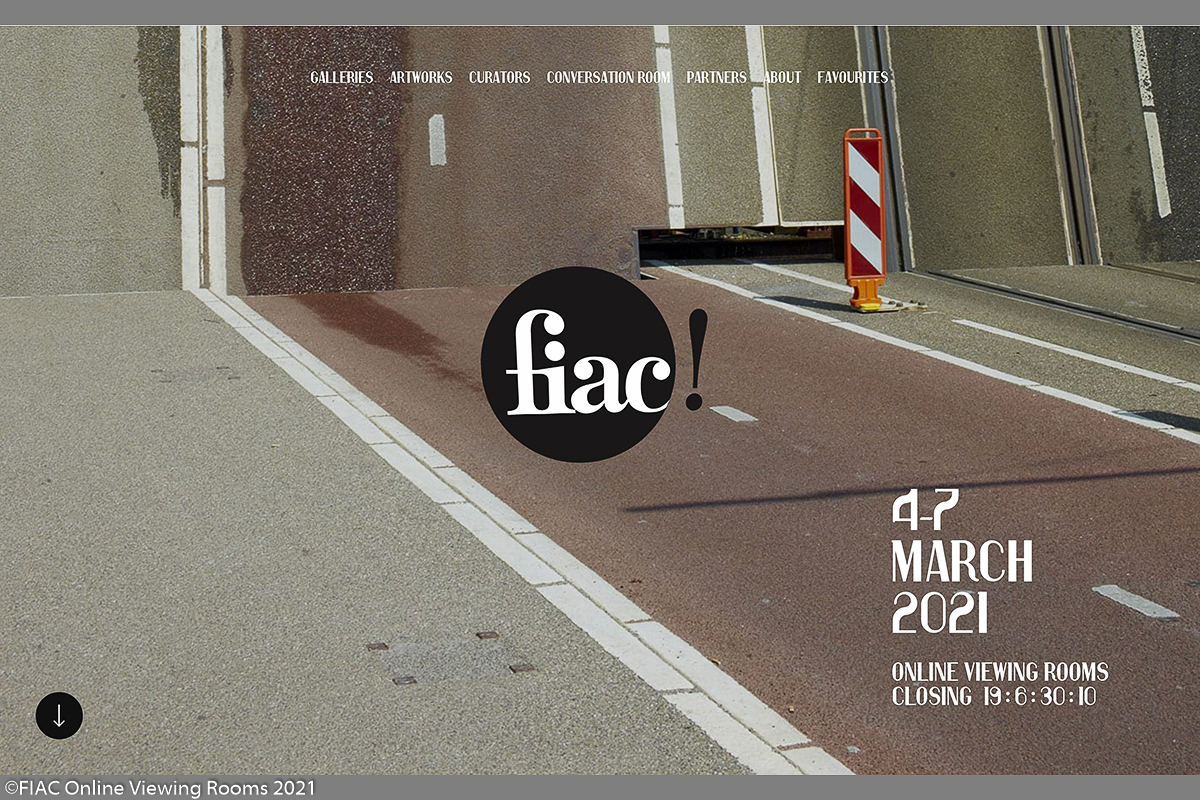 The musée du Louvre, the Centre Pompidou and the Fondation d’entreprise Pernod Ricard are participating in this first edition of FIAC Online Viewing Rooms with exclusive content.

FIAC has invited the Centre Pompidou to celebrate the historic partnership that has united us for many years.

Europe’s leading collection of modern and contemporary art, with more than 120,000 works, the Centre Pompidou is one of the two most important in the world for the diversity of the disciplines it preserves. The museum acquires numerous works each year at FIAC through the acquisition committees but also the Association des Amis du Centre Pompidou. For the launch of FIAC Online Viewing Rooms first edition, the Centre Pompidou presents an online selection of works that have entered the museum’s collections after having been exhibited at FIAC in recent years.

After 20 years of collaboration with FIAC, the Fondation Pernod Ricard continues to show its support ofthe fair with its participation in FIAC Online Viewing Rooms. The Fondation presentsa selection of artists films by Isabelle Cornaro, LolaGonzalez and Bertrand Dezoteux, each of them related to the programmingof the Foundation’s new venue in the Saint-Lazare district in Paris.

In a video, Dominique de Font-Réaulx Director of programmes and cultural mediation at the musée du Louvre, looks back on the museum’s historic collaboration with FIAC and the Louvre’s support for contemporary art.

The Louvre has been one of FIAC’s privileged partners for sixteen years. Within the framework of Hors les Murs, the Domaine National du Louvre et des Tuileries presents a programme of monumental works to its millions of visitors – sculptures and installations that enter into conversation with the prestigious context of the garden, with its fountains and classical and modern statuary. Every year, within the framework of Parades for FIAC, the Louvre hosts a series of performances in its permanent collections and famous Auditorium.

The musée national Eugène-Delacroix has participated in Hors les Murs since 2015, giving carte blanche to an artist whose work resonates within the heart of the painter’s studio and garden. 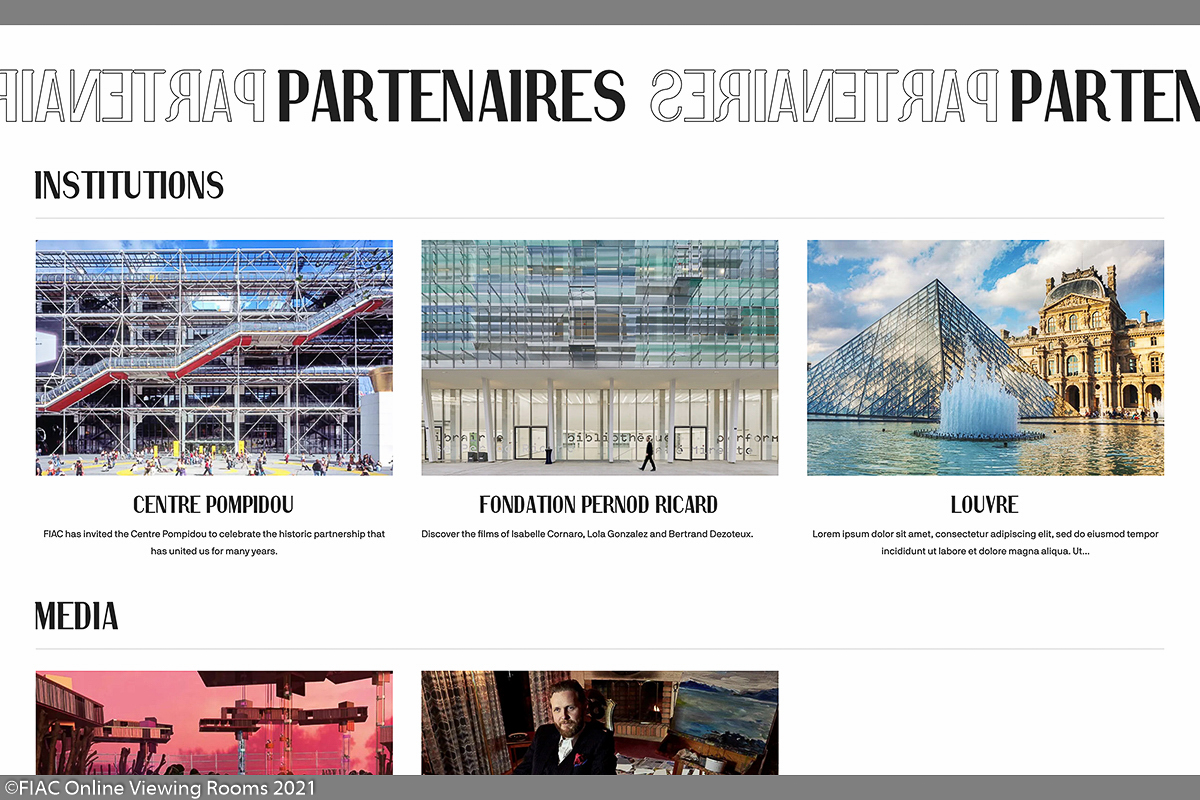 The Platinium Moment, Artistic Encounter La Prairie presents an artistic encounter between Japanese artist Nobuhiro Nakanishi and British composer Max Richter. Inspired by the intangible and expandable qualities of the temporal, Nakanishi and Richter have each created works that come together in an encounter that explores the fundamental properties of The Platinum Moment. 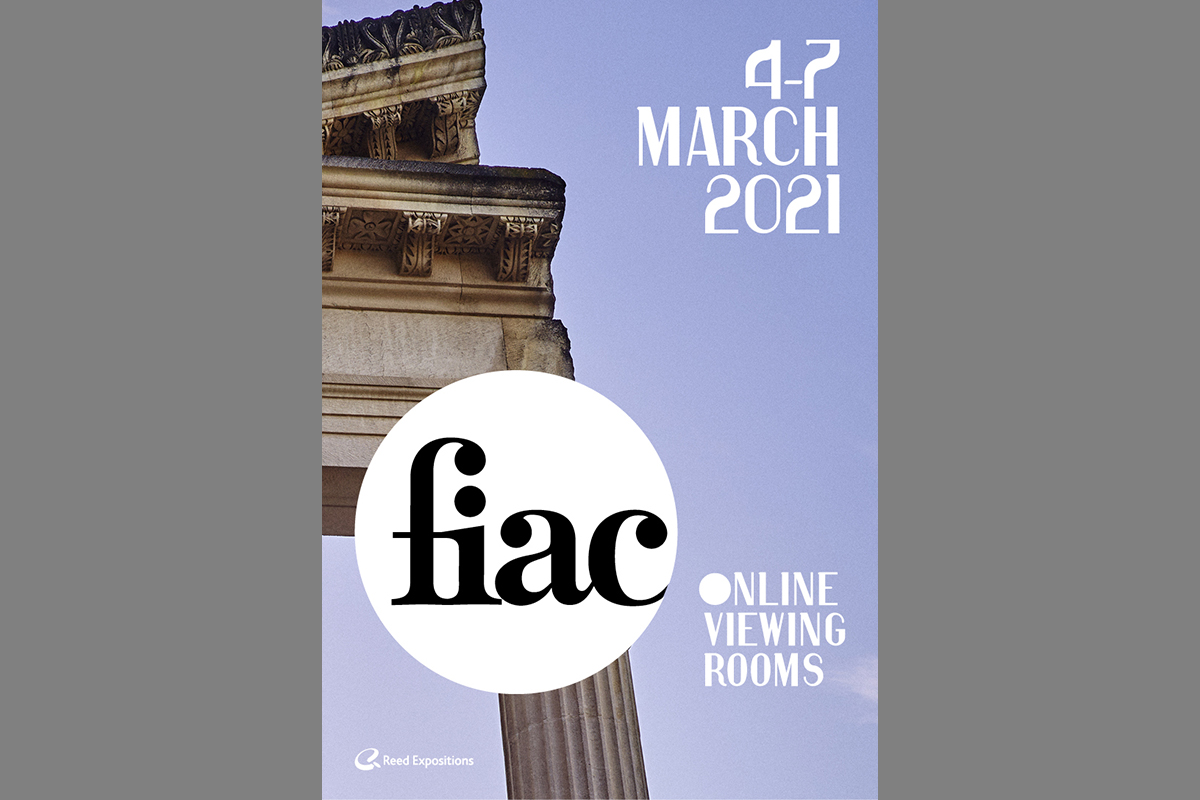