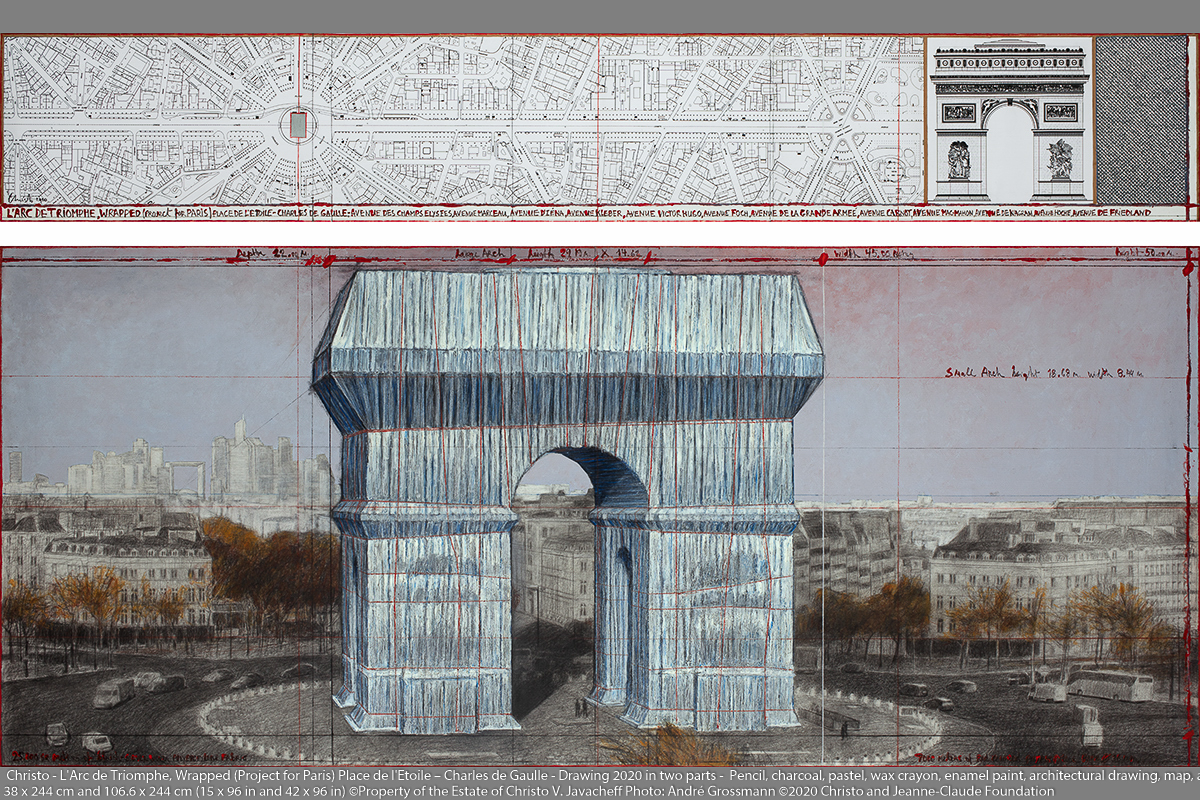 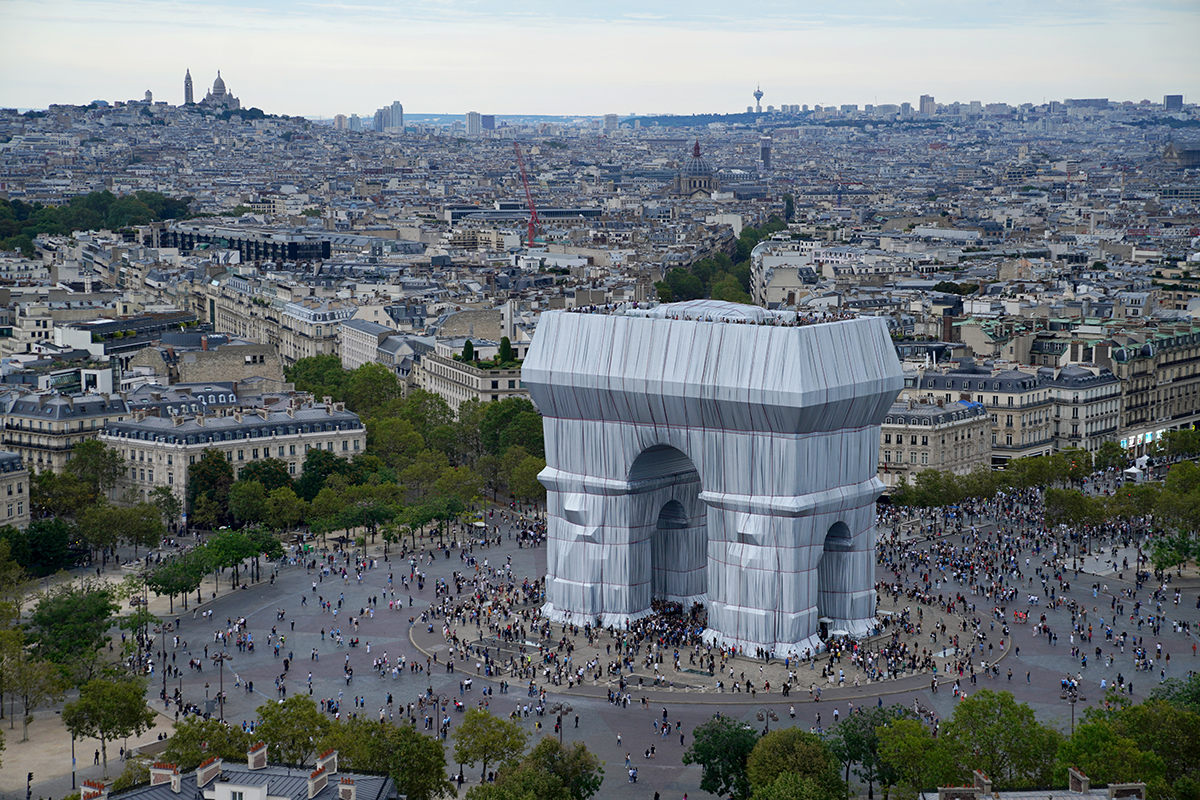 A temporary artwork for Paris on view from Saturday, September 18 to Sunday, October 3, 2021. 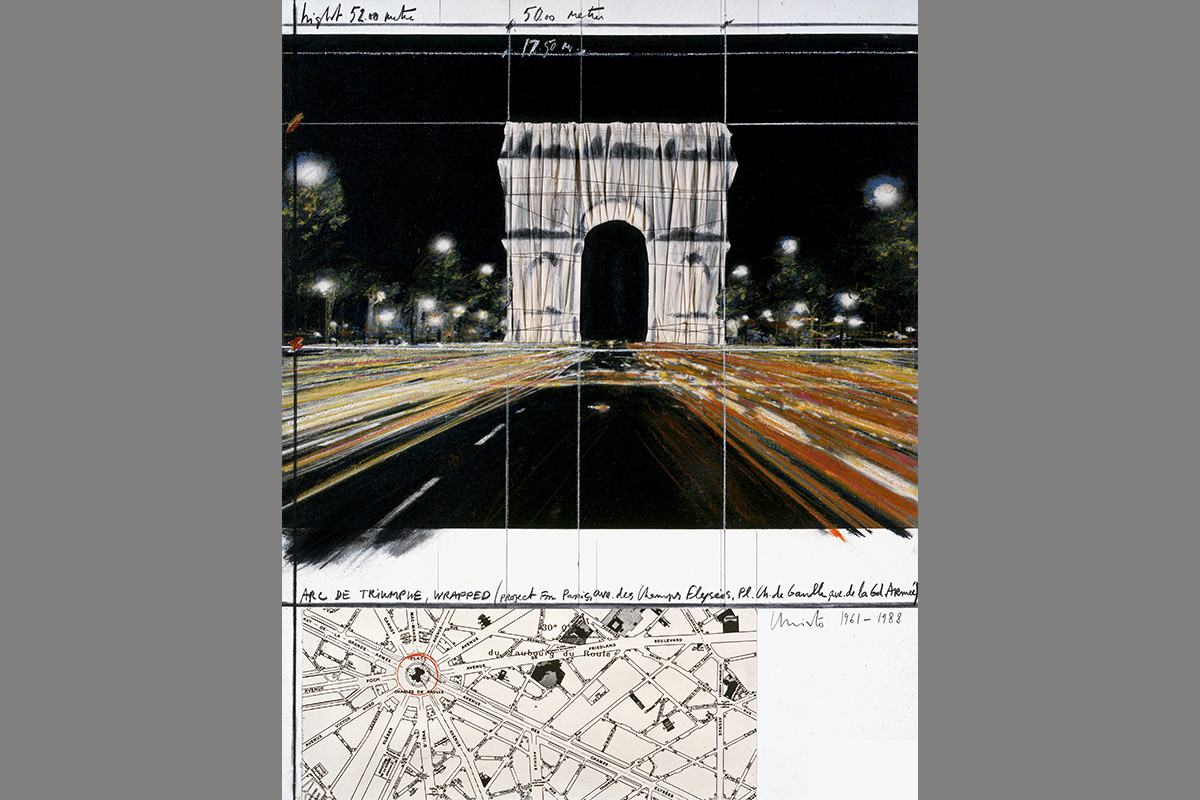 In 1962-1963, he created a photomontage with L’Arc de Triomphe, Wrapped, seen from Foch Avenue, and again featured the Arc de Triomphe wrapped in a collage in 1988. He began actively developing this project in 2017, and now 60 years later, it will finally be realized. 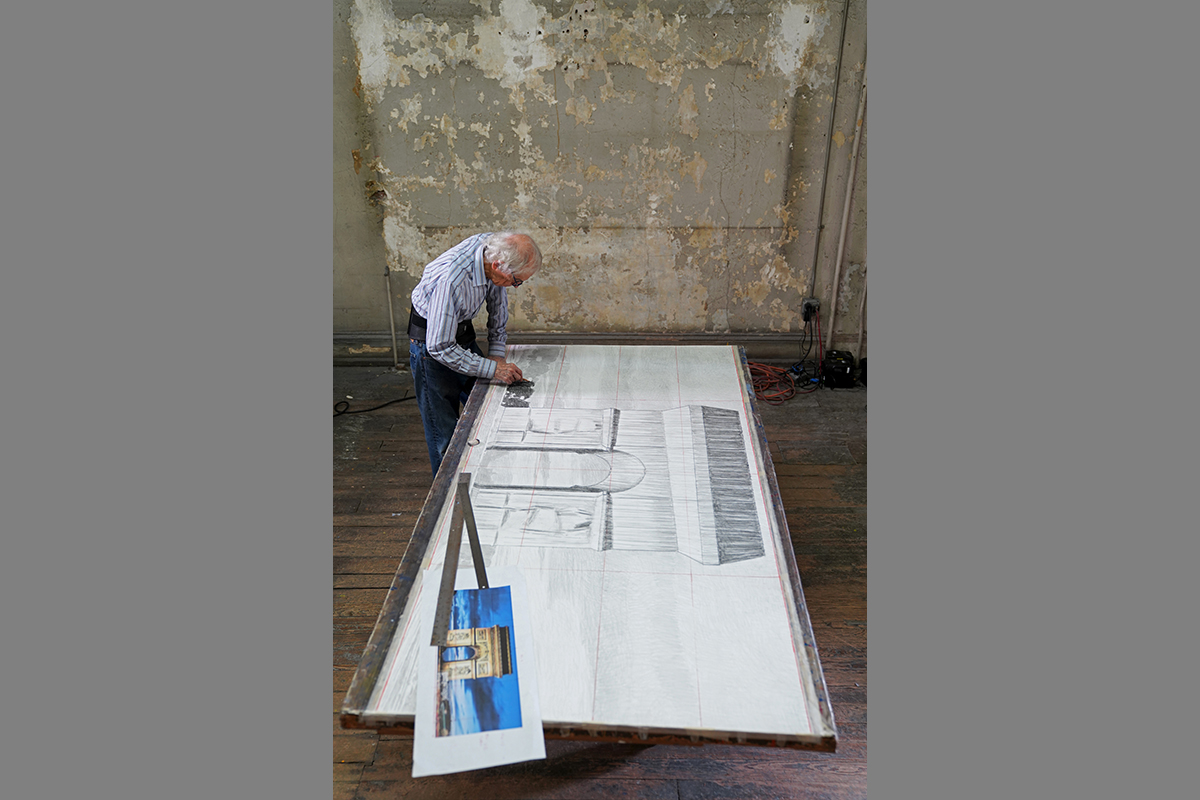 “It will be like a living object which will move in the wind and reflect the light. With its  moving folds, the monument’s surface will become sensual. People will want to touch  the Arc de Triomphe,” 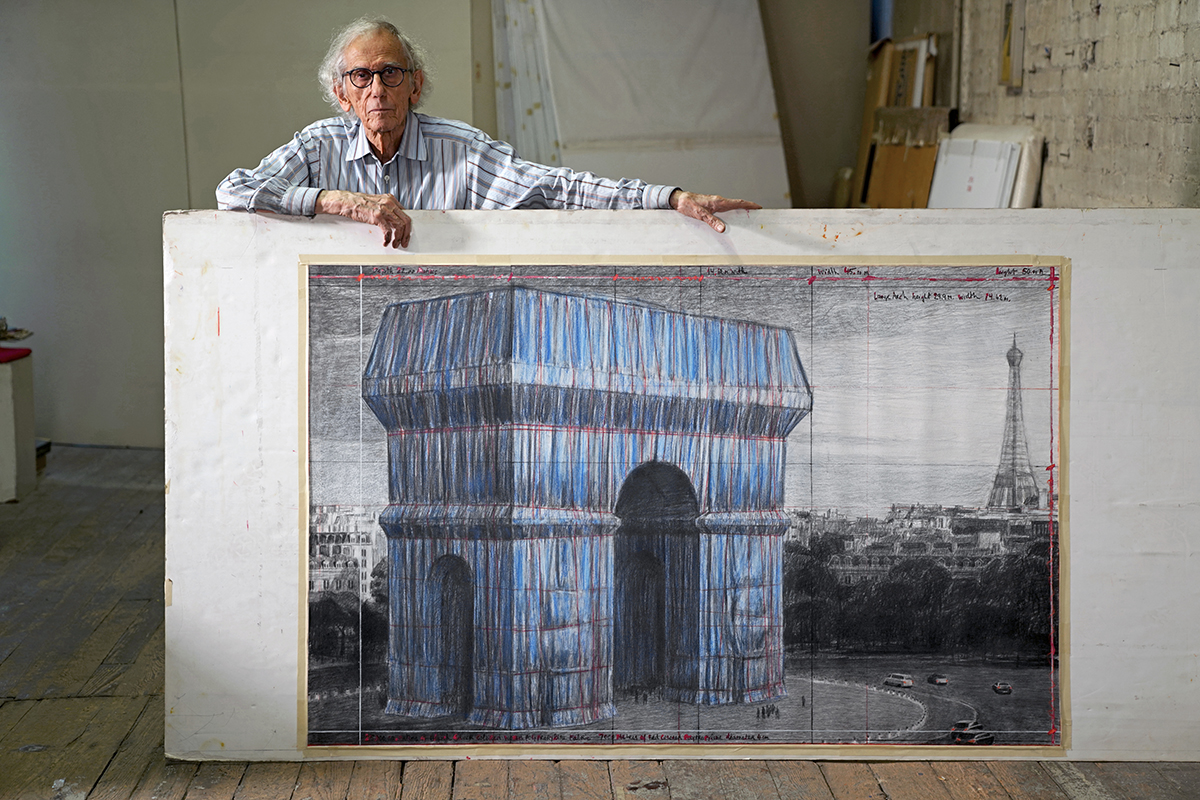 The project is entirely funded by the Estate of Christo V. Javacheff, through the sale of Christo’s preparatory studies, drawings, and collages of the project as well as scale models, works from the 1950s and 1960s, and original lithographs on other subjects. It receives no public funds or sponsorships.

Christo and Jeanne-Claude have always made clear that their artworks in progress be continued after their deaths. Per Christo’s wishes, L’Arc de Triomphe, Wrapped has been realized by his team has been completed by his team in partnership with the Centre des Monuments Nationaux and in coordination with the City of Paris. It also receives the support of the Centre Pompidou. 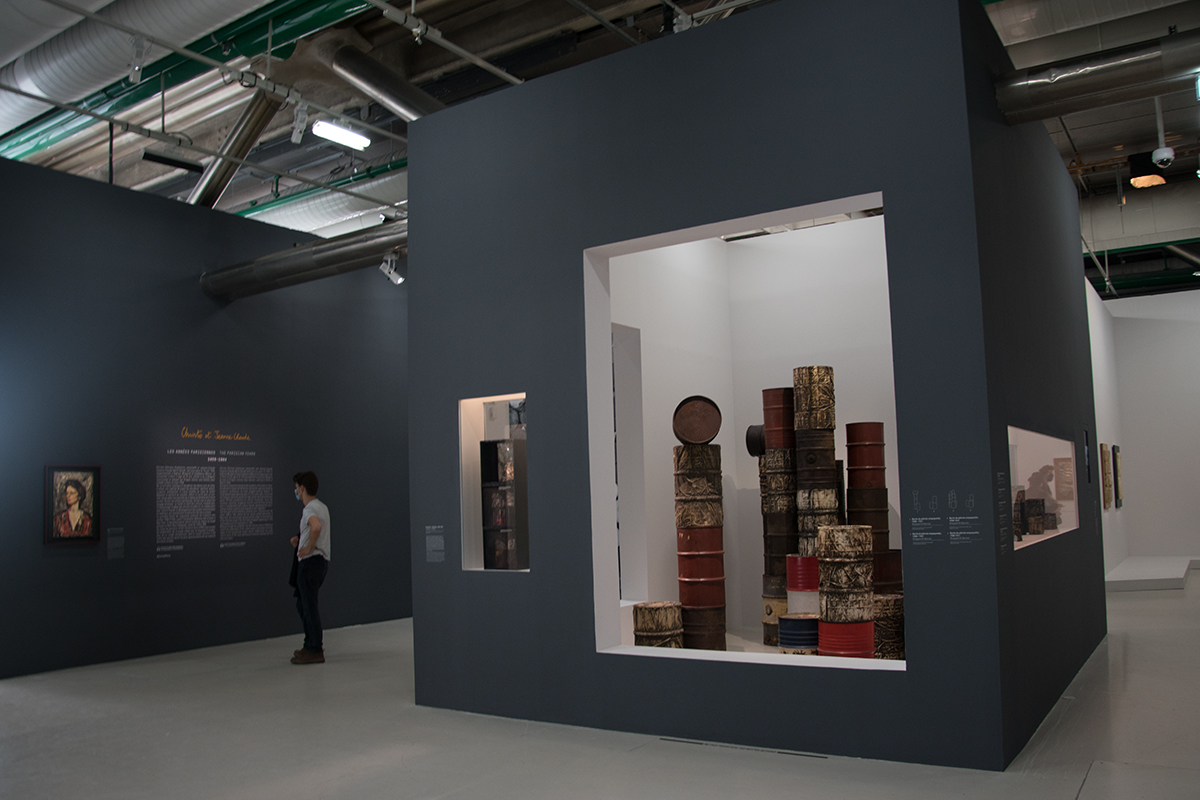 The project was submitted to the Centre des monuments nationaux by the Centre Pompidou, which organized the exhibition “Christo and Jeanne-Claude, Paris!” in 2020, and is supported by the City of Paris. 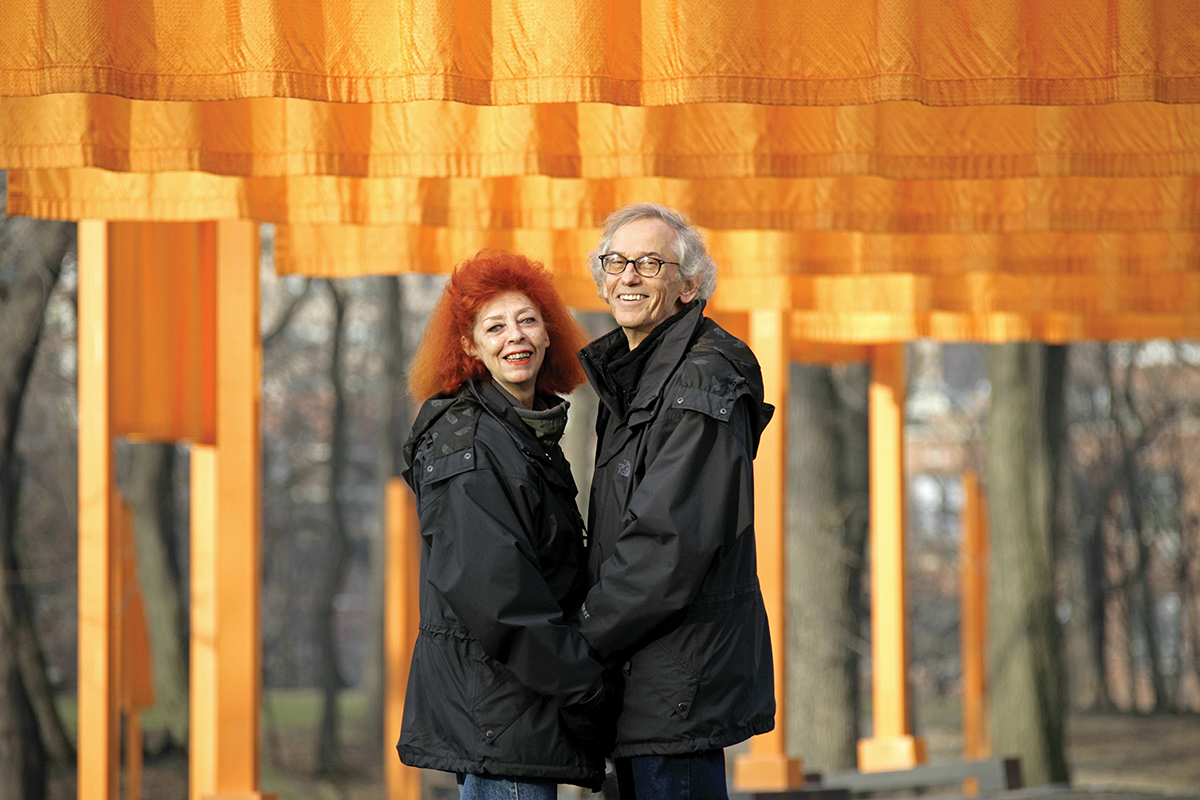 After studying at the Fine Arts Academy in Sofia, Christo fled communist Bulgaria in 1957 and settled in Paris in March 1958, attracted by the city’s aura and its dynamic art scene. Just a few months after his arrival, he met Jeanne-Claude, the adopted daughter of French General Jacques de Guillebon. They began their artistic collaboration in 1961 and settled in New York in 1964.

The seven-year period spent in Paris (1958-1964) was essential for Christo. This intense period of creation appears today as fundamental in his artistic gesture. In 1961, Christo and Jeanne-Claude began to conceive interventions at the city’s scale, from the Wall of Oil  Barrels – The Iron Curtain, Rue Visconti realized in 1962 to The Pont Neuf Wrapped, which  took ten years to realize from 1975 to 1985.

THEIR PROJECTS FOR THE CITY OF LIGHT INCLUDE: 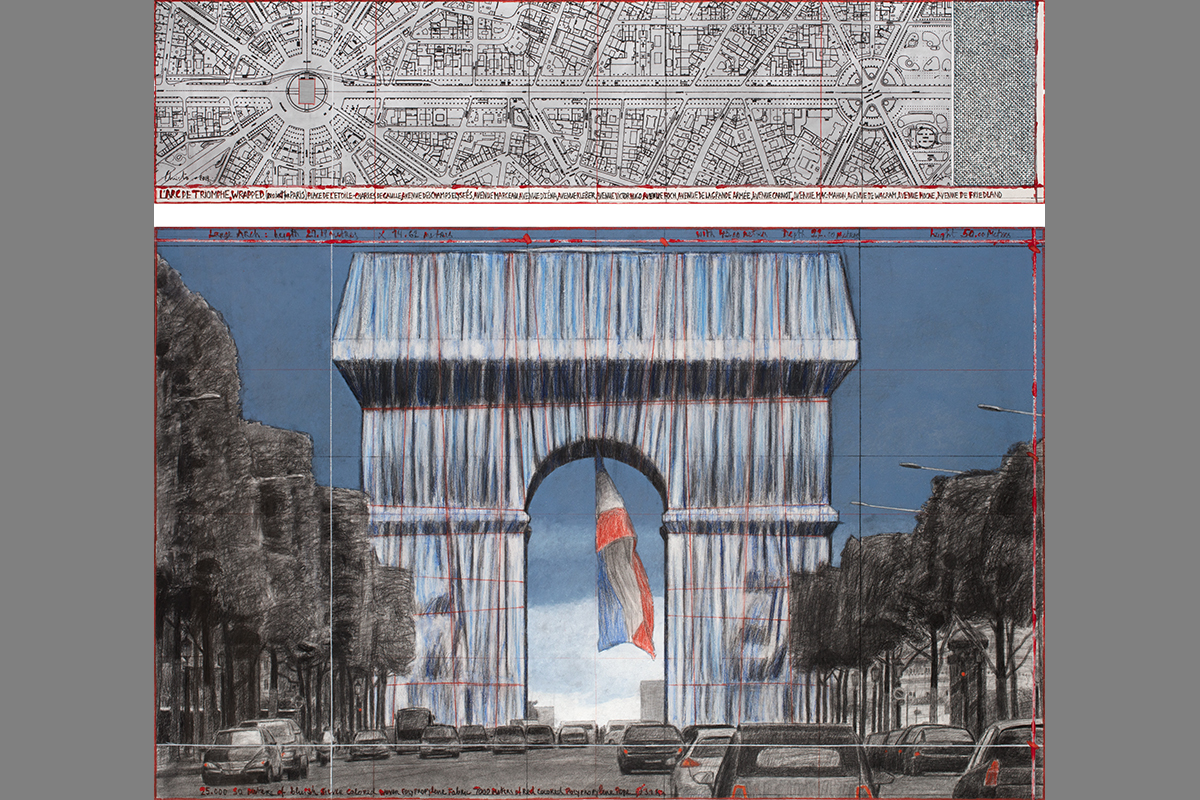 In 1806, Napoleon I decreed that an arch be built on the Place de l’Etoile in the glory of the Grande Armée. This project was entrusted to Jean-Arnaud Raymond and Jean-François Chalgrin. Plans were hastily drawn up and the first stone was laid on 15 August 1806, the day of the Emperor’s birthday. Chalgrin subsequently devised a new project on his own, and his successors followed his architectural plans. When Chalgrin died in 1811, the monument only stood at 5.40 metres above ground level. With the return of the Bourbons in 1814, work on the project stopped, before starting again during the reign of Louis XVIII and was finally completed in 1836, under Louis-Philippe, who dedicated it to the glory of the armies of the French Revolution and of the Empire.

The Arc de Triomphe stands as a symbol of national unity and is ornamented with four groups of sculpted figures by François Rude, Jean-Pierre Cortot and Antoine Etex. The frieze running around the entablature recounts the departure and return of the French armies. The architect, Chalgrin, had not made any plans for the ornamentation of the inside of the monument. It was in 1835 that the idea emerged to inscribe on the underside of the vault decorated with Roman-style panels the names of the 128 battles of the First Republic and the Empire, together with the names of the Generals who had taken part in them.

Ever since construction was completed, the Arc de Triomphe has been at the centre of major events, such as the return of Napoleon’s ashes on December 15th 1840, the Festival of Fraternity in February 1848, and Prince Napoleon Bonaparte’s passing through the arch on December 2nd 1852. At the State funeral of Victor Hugo in 1885, his catafalque was placed beneath the arch before his body was taken to the Panthéon. For the Victory celebrations on July 14th 1919, French and Allied troops paraded beneath the arch. On November 11th 1920, a solemn procession transported the body of the Unknown Soldier to the Arc de Triomphe. It was buried beneath the vault to honour the 1,500,000 soldiers who died in battle during the Great War. On November 11th 1923, the Flame of Remembrance was lit on the tomb of the Unknown Soldier, consecrating the patriotic and symbolic nature of the Arc de Triomphe. On August 25th 1944, Paris was liberated after four years of occupation, and the following day General de Gaulle descended the Champs-Élysées from the Arc de Triomphe. At 6.30pm everyday since 1923, veterans and soldiers have rekindled the Flame.

Place of history, remembrance, gathering and celebration, the Arc de Triomphe is opened to the public by Centre des monuments nationaux. 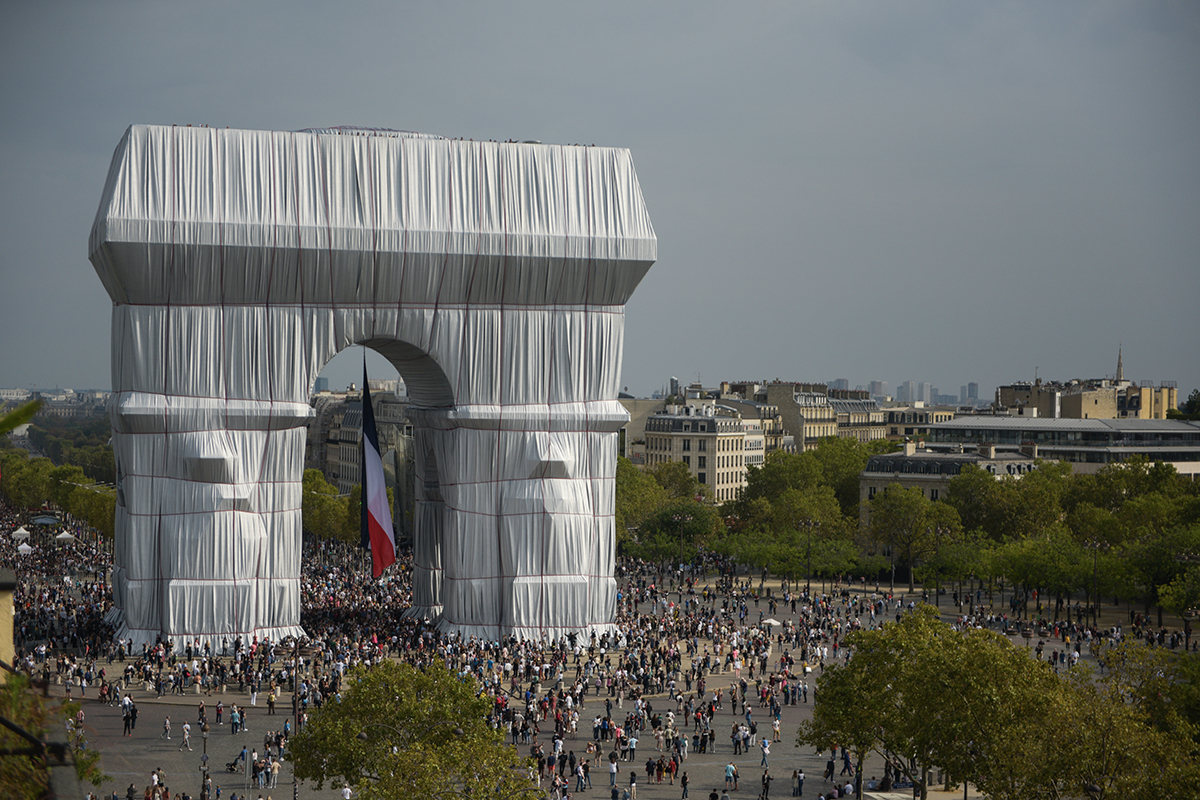 The Centre des monuments nationaux, which ensures the conservation and opening of the Arc de Triomphe on behalf of the national state, is pleased about the realization of a project that demonstrates its commitment to contemporary art creation and honors one of the most emblematic monuments in Paris and in France.

To enable visitors to enjoy L’Arc de Triomphe, Wrapped safely and close up, the Place de l’Etoile will be pedestrianised for the three weekends of its presentation to the public. This exceptional closure to traffic of the Place Charles de Gaulle has been organised with the cooperation of the Ville de Paris and the Préfecture de Police.

Throughout the duration of L’Arc de Triomphe, Wrapped, including the installation (through September 17th, 2021) and dismantling (from October 4th to November 10th, 2021), the interiors and the panoramic terrace of the monument, managed by the CMN, will remain open to the public.

The Eternal Flame, in front of the Tomb of the Unknown Soldier at the Arc de Triomphe, continued to burn throughout the installation, and it will continue to burn throughout display and dismantling of the artwork. As always, veterans’ associations and volunteers committed to the values of the French Republic will ensure the continuity of remembrance and the daily ceremony of rekindling the flame that pays homage to the Unknown Soldier and those who lost their lives fighting for France.

In order to preserve the integrity of the classified Historical Monument, the operations undertaken to set up and dismantle L’Arc de Triomphe, Wrapped are subject to scientific and technical monitoring by Ministry of Culture teams. 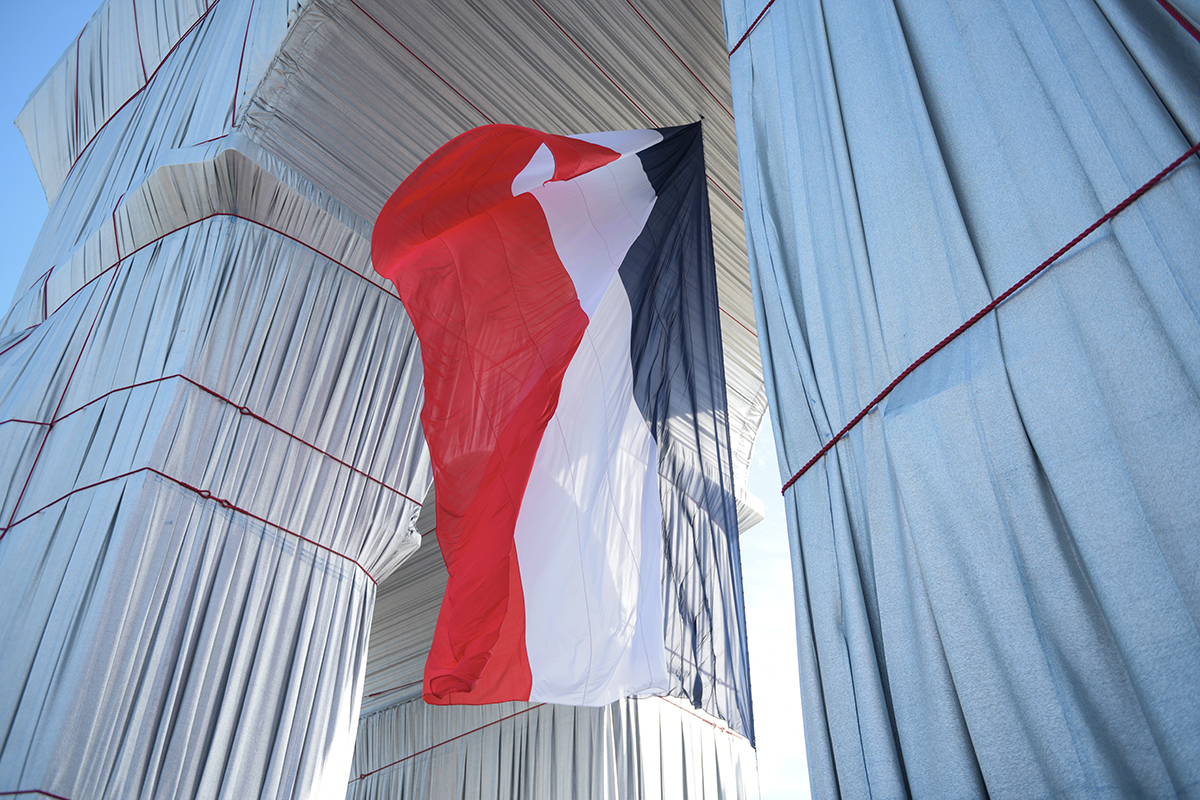 As with all of Christo and Jeanne-Claude’s projects, L’Arc de Triomphe, Wrapped will be free for all and can be visited 24 hours a day from September 18 to October 3. The Arc plateau will be accessible to everyone but as usual, to visit the inside of the monument and access its terrace, the Centre des Monuments Nationaux requires tickets, which are available on their website.

Christo and Jeanne-Claude have always noted that they ”inherit” the places of their projects as they are, without altering the existing conditions.

The monument will remain open to the public as usual:

Every day from  10h00 to 23h00, during the entire duration of the project (installation, exhibition, dismantling).

September 18, 19, 25, 26, and October 2,3From 6h00 on Saturdays to 2h00 on Monday, Place de L’Étoile – Charles de Gaulle will be closed to traffic circulation and it will become a pedestrian zone. Parking will be available around the perimeter.

A health pass is mandatory to enter the Arc plateau throughout the week and the pedestrian zone on weekends, for anyone aged 18 and over. Beginning September 30, 2021, a health pass will also be needed for people aged 12-17.

Documentation of at least one of the following is required: 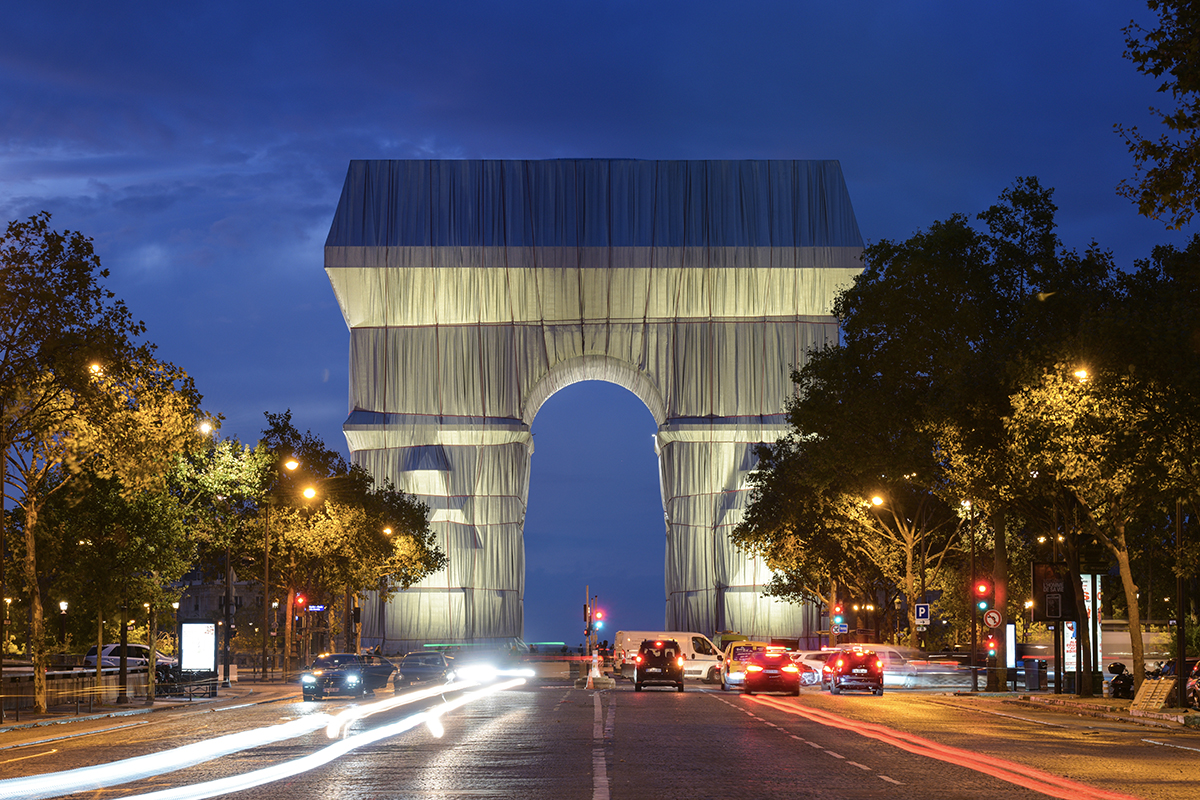