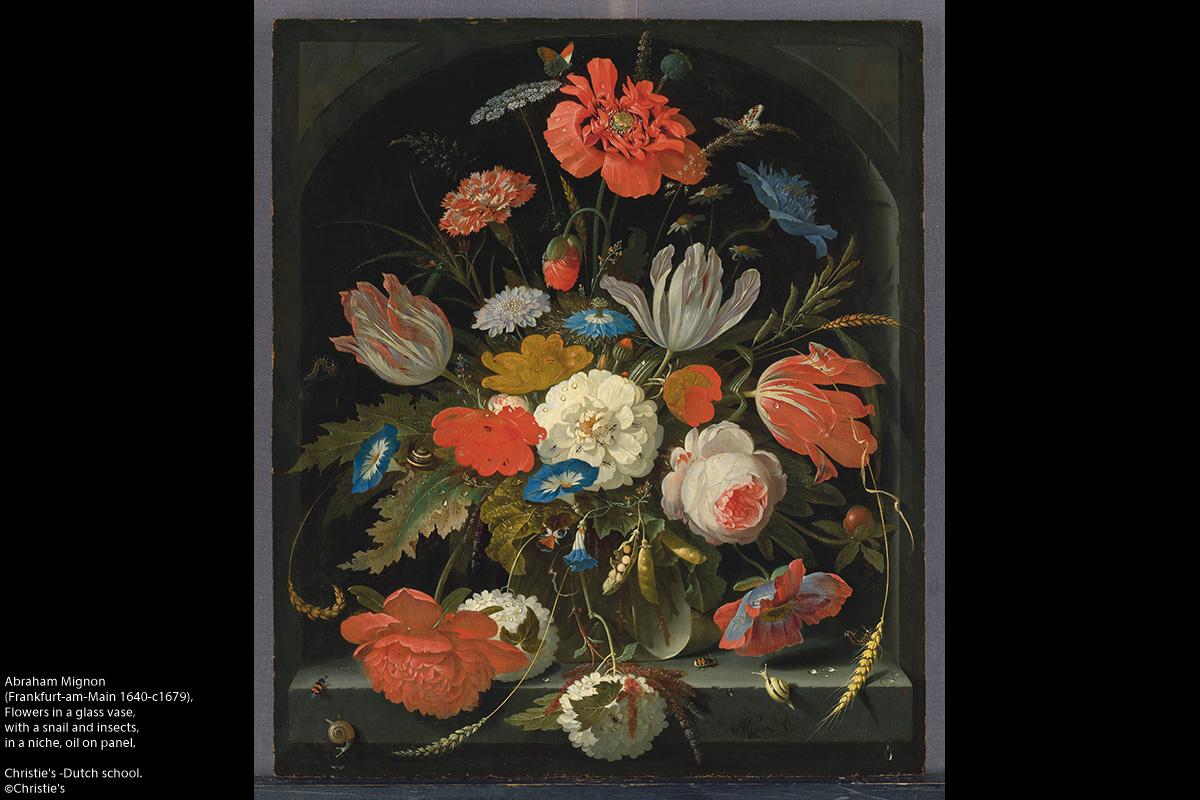 One of the Most Wonderful Art Events

The galleries and auction houses of London Art Week opened their doors for the third iteration of LAW Winter, from Sunday 1 to Friday 6 December 2019. Thirty-two special exhibitions and Old Master sales offered millennia of art at locations throughout Mayfair and St. James’s. Whilst the emphasis is on pre-contemporary works, art on display dates back as far as the days of Ancient Greece and Rome through to the present time. 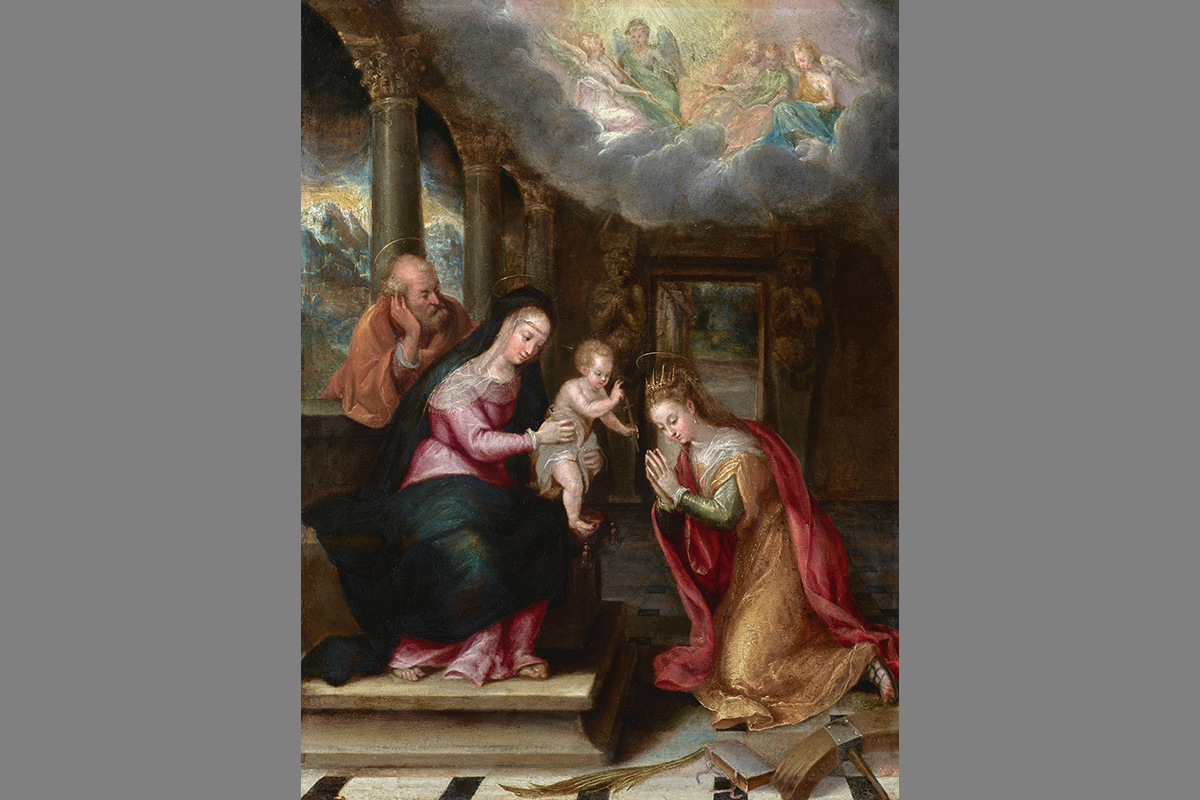 Portraits by Sir Anthony Van Dyck at The Weiss Gallery

A portrait of the young Queen Elizabeth I at Bonhams 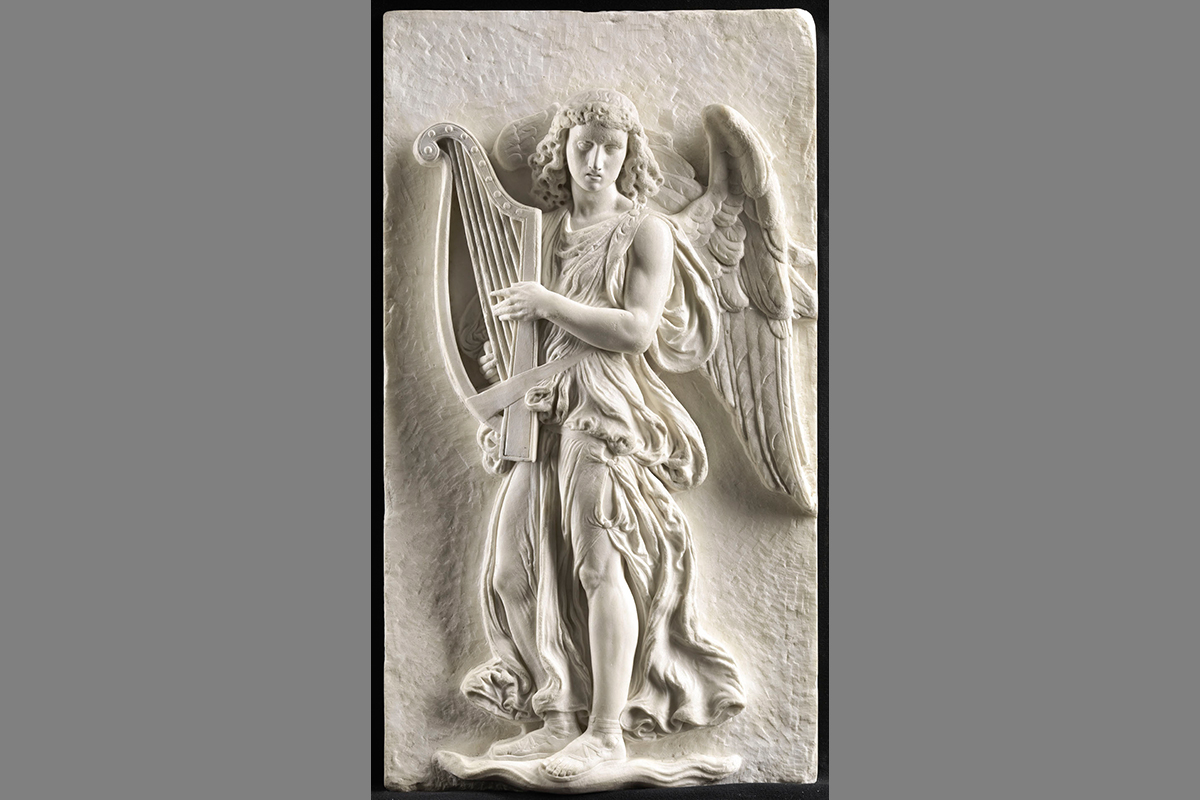 London Art Week is a wonderful excuse for collectors, curators and art lovers to explore many of the capital’s most illustrious commercial art galleries and spaces, and enjoy events and talks. All the works displayed are for sale, with prices starting below £1,000, and the expert dealers are on hand to share their knowledge. Like visiting a series of mini museums, following the London Art Week Winter 2019 map (drawn by artist Adam Dant) revealing rarely seen medieval art from Spain, ‘giant leaf’ renaissance tapestries inspired by exotic plants of the New World, ground-breaking female artists of the 20th century, art influenced by the orient, and works by famous ‘blue chip’ artists of the 17th to 20th centuries. 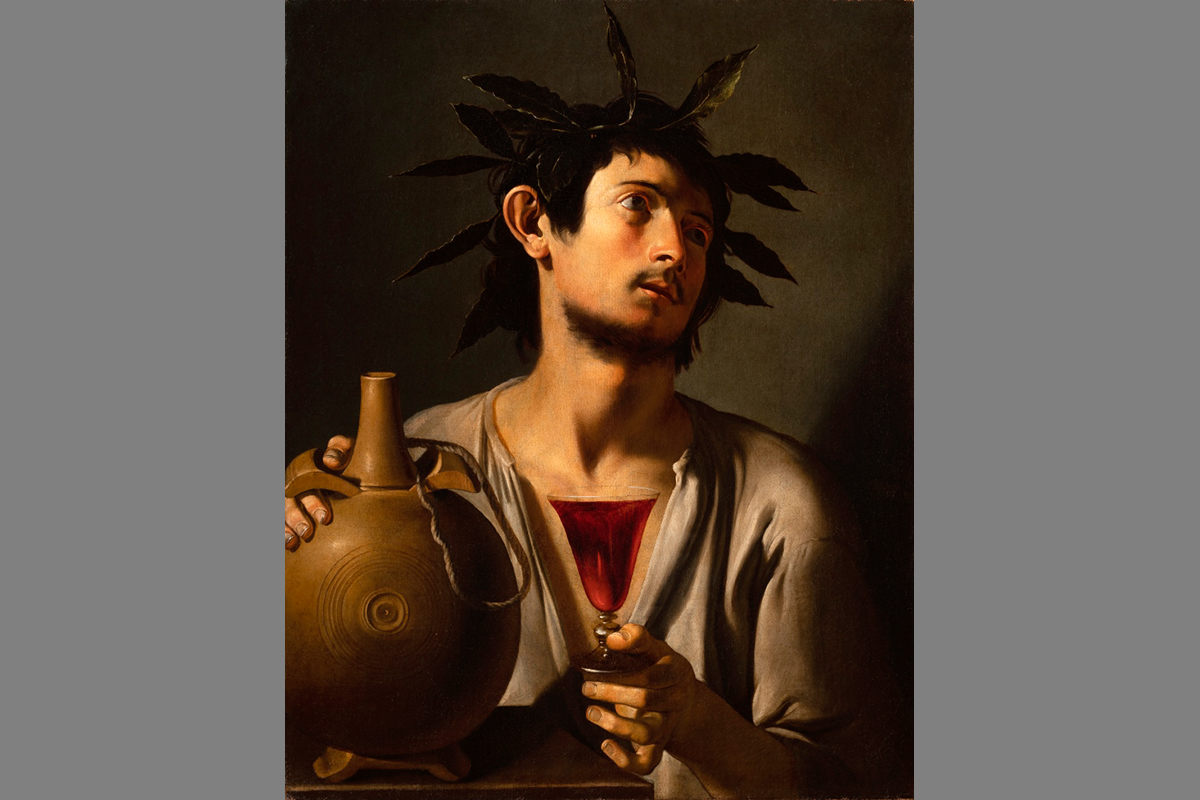 Pseudo-tommaso Salini, Portrait of a Young Man as Bacchus
©Benappi 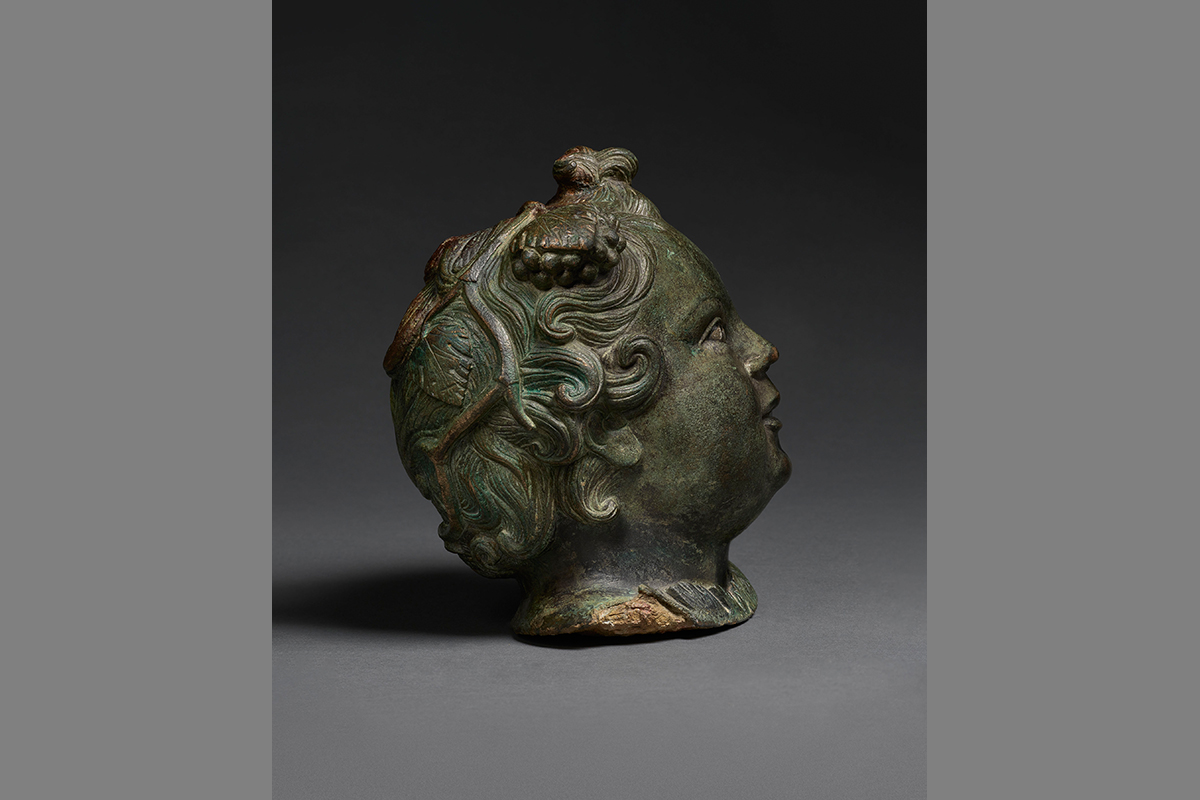 Along with paintings by Yves Klein and Man Ray at Olivier Malingue’s L’empreinte exhibition, an early frottage work by Max Ernst (1891-1976) executed in 1925, La Fleur du désert; Charles Beddington Fine Art had a charming monochrome sketch by Sir Joshua Reynolds (1723-1792) of A Girl with a Bird, a preparatory work for the recently discovered painting that sold at Christie’s New York in 2018. Star of the show at The Weiss Gallery was a portrait by Sir Anthony Van Dyck (1599-1641) of Mary Barber, later Lady Jermyn (d. 1679) [?]

Women of Power, Men of Politics

An exquisite early Pre-Raphaelite painting, purchased by Prime Minister W.E. Gladstone from the Royal Academy exhibition in 1857, has been rediscovered by Bagshawe Fine Art. The Shakespearian scene depicting Slender’s Wooing of Ann Page from The Merry Wives of Windsor, is the work of the tragically short-lived and hence almost completely unknown Adolphus Madot (1833?–1861). Madot, initially a Royal Academy student, had just begun to send a few works to the Academy for exhibition when he was struck with consumption and died while still in his twenties. Yet Slender’s Wooing of Ann Page, painted in 1856 and shown at the Academy the following year, demonstrates just how accomplished Madot had already become. Had he lived, he would surely have become an artist of considerable reputation. 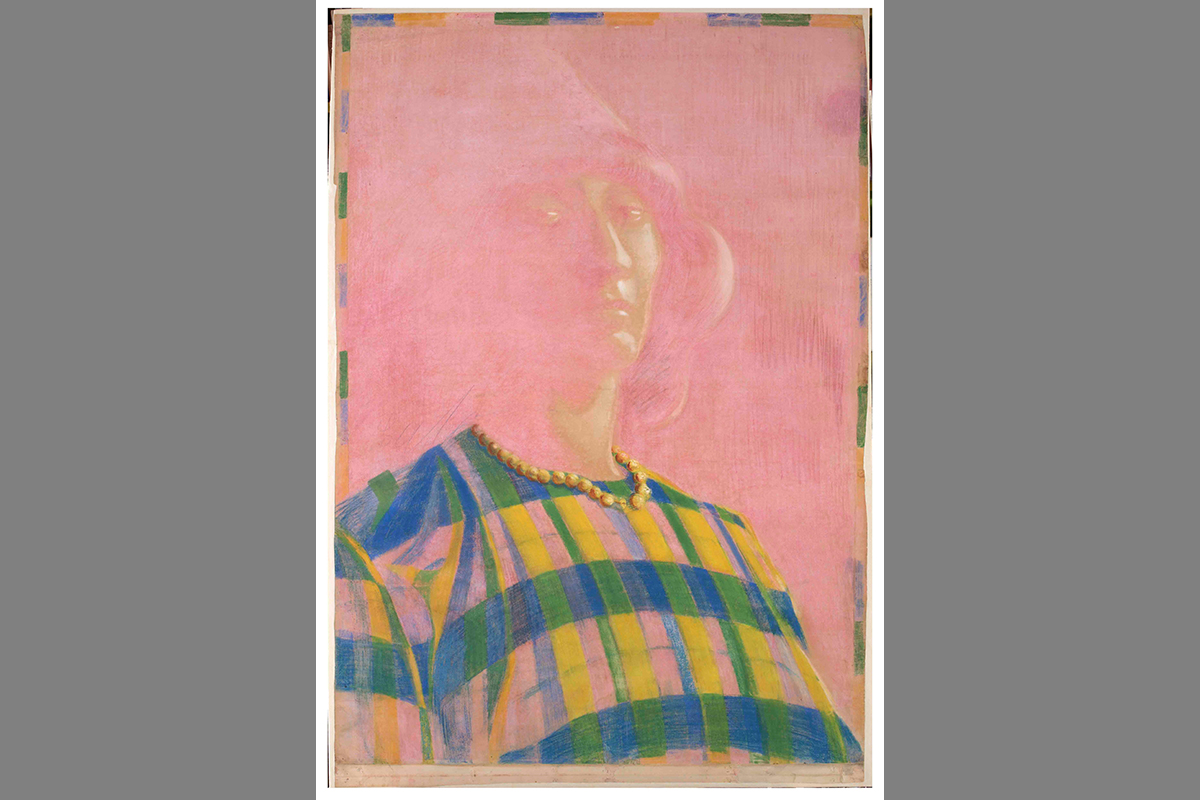 Adriana Bisi Fabbri (1881-1918) was an artist with an irrepressible talent and level of activity: she was a painter, illustrator and caricaturist as well as a creator of fashion, costumes and stage sets. All accomplished in a life too short, dying at the age of just thirty-seven; completely self-taught, and from a family left abandoned and penniless by her father. Her Self-Portrait, 1913, an extraordinary work for the period, a highlight at Laocoon Gallery, presenting XX: The Female Gender in Italian XXth Century Italian Art. 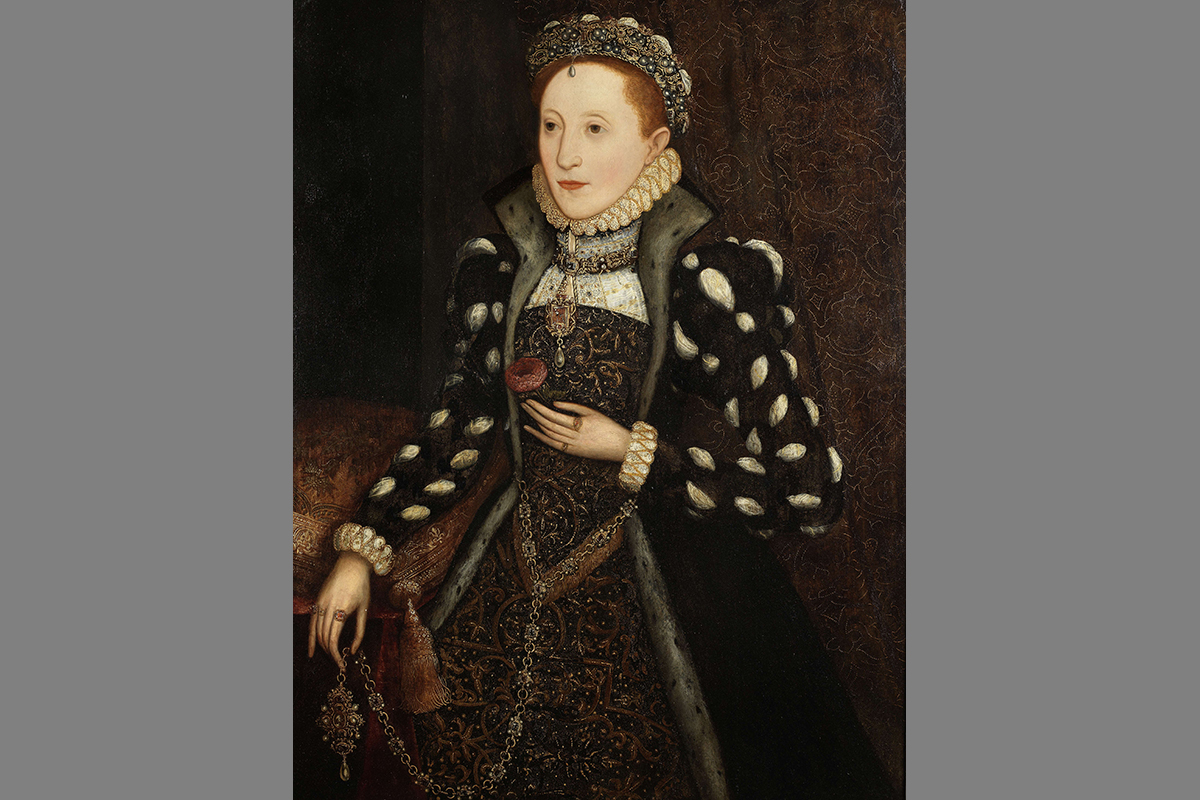 Bonhams presented a portrait of a young Queen Elizabeth I, in the first years of her reign, by the Workshop of Steven van der Meulen (?Antwerp – c1564 London), bedecked with black pearls, white ermine and chains of gold. In contrast is a strikingly simple 1933 pencil portrait in profile at Colnaghi thought to depict the politician and author Patricia Frances, Lady Strauss. 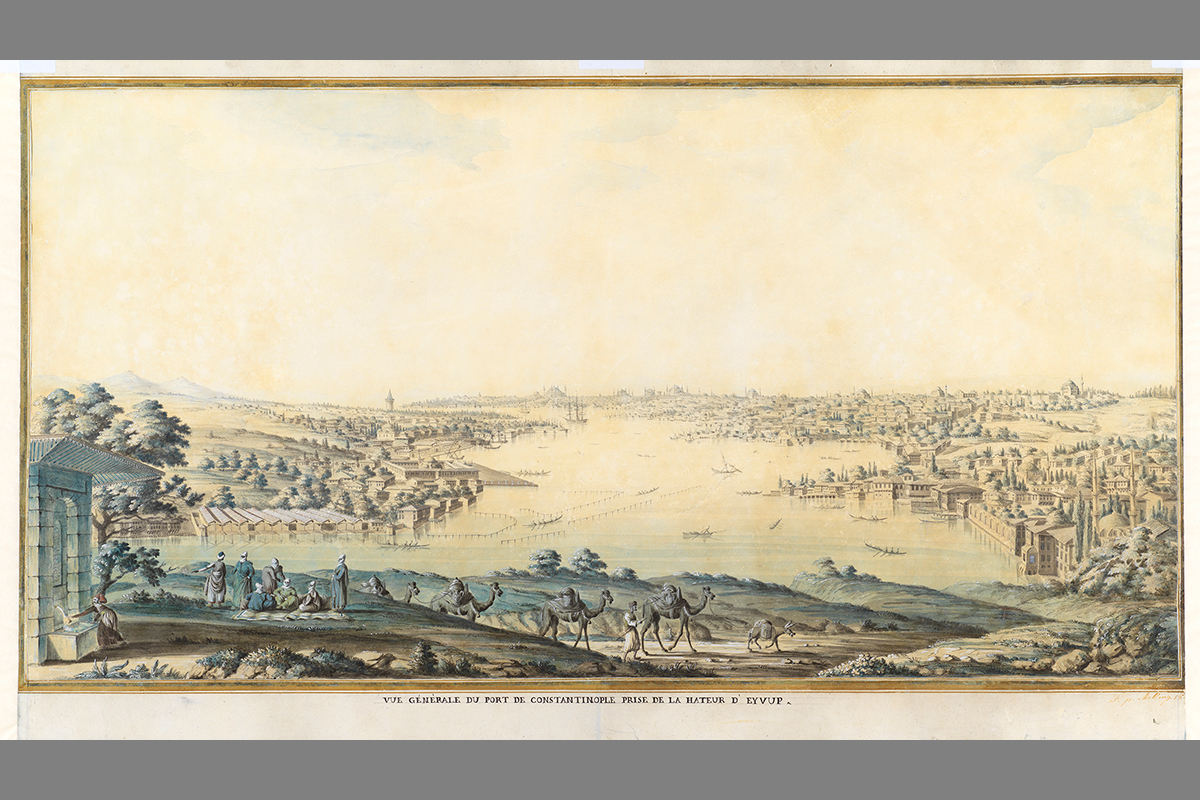 Two exhibitions encompassed this theme: at Raccanello LePrince (exhibiting with Callisto Fine Arts in St. James’s) was Orientalismo fiorentino: the taste for the exotic in 19th century Florence, while Oliver Forge & Brendan Lynch Ltd examined Ottoman Patronage and European Merchandise: Works of Art from Turkey and France, 1530-1820. Raccanello LePrince displayed fine examples from the extraordinary production of ceramicist Ulisse Cantagalli, perhaps the most important and refined interpreter of an Italian art industry inspired by the Orient, which peaked after the 4th Congress of the Orientalists took place in Florence in 1878.  Forge & Lynch, encapsulating the variety of works in London Art Week, have centred their exhibition on two highly important watercolour Views of Istanbul by Antoine-Ignace Melling (1763-1831) formerly in the collection of Georges Zarifi (1807-84), banker to the Ottoman Sultan Abdul Hamid II. Setting the scene, these drawings are complemented by a fine collection of Iznik tiles, among other works of art such as porcelain, embroidery and character sketches made in, or for, the Ottoman market. 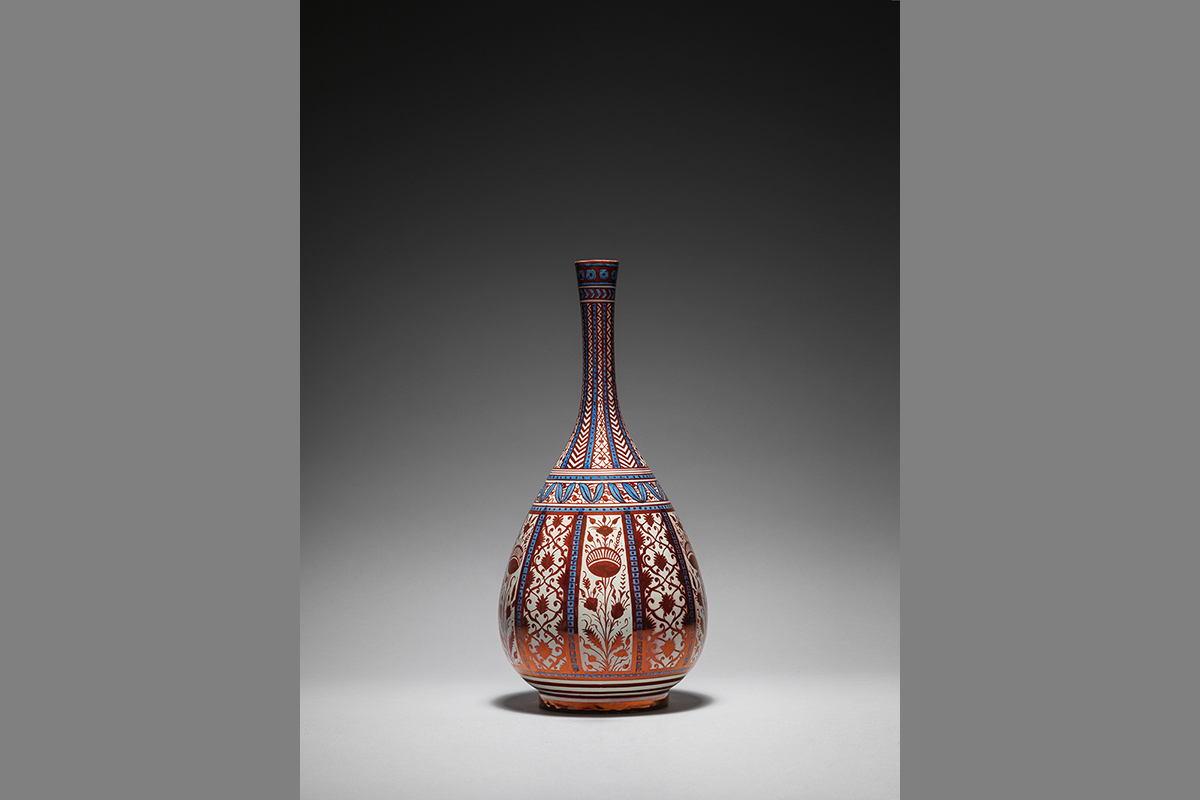 Raccanello LePrince – Red lustre vase, one of a pair after C17th Safavid original in ©the V&A Museum

Highlights included an important and very rare Vincennes ‘Bleu Celeste’ broth-bowl and cover with stand made for export in around 1755. It is one of only three known examples (POA). The British Museum has just opened a related exhibition, Inspired by the east: how the Islamic world influenced western art (to 26 January 2020).

A revelatory exhibition at Sam Fogg, in collaboration with Galeria Caylus from Madrid, Retablos: Spanish Paintings from the 14th to 16th Centuries, features a depiction of Saint Martin, dressed as a knight in green on a grey steed, the bridle detailed with gilded three-dimensional pastiglia (raised plaster) decoration.

The Brigand’s Family by Joseph Severn (1793-1879), is at Karen Taylor Fine Art: Severn was a friend of Keats through the poet’s last months at Rome. Severn capitalised greatly on the fame of his dead friend, and his Italian genre paintings became hugely fashionable with a waiting list of people wanting to buy them. Rare survivors at Trinity Fine Art are a trio of white marble angels, carved in 1886-87 by the Italian sculptors Attilio and Furio Piccirilli (after designs by Thomas Garner and Jean Guillemin) for the great reredos made for St. Paul’s Cathedral, London. This was installed in 1888, but dismantled after the Second World War and subsequently largely destroyed. 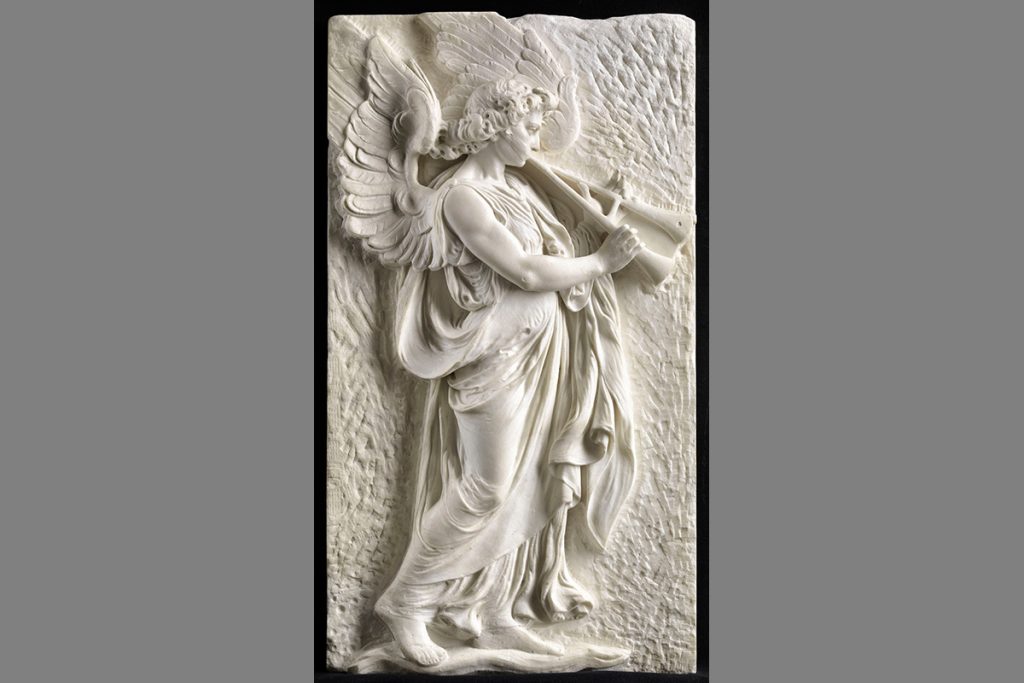 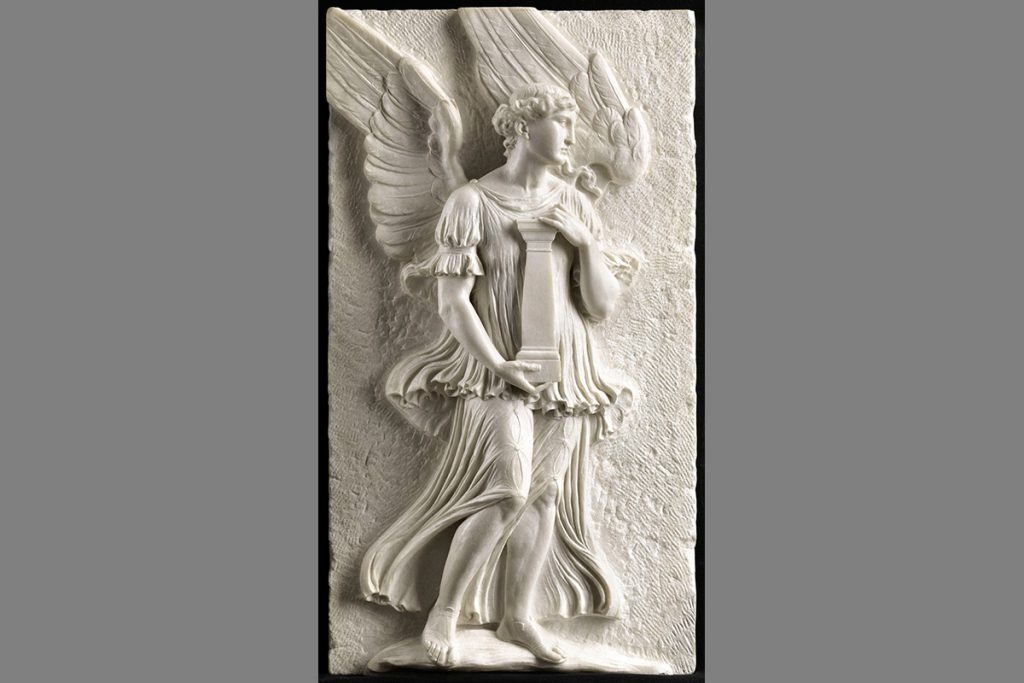 The Landscape of the Sublime

In One Hundred Drawings & Watercolours, a joint exhibition for Guy Peppiatt Fine Art and Stephen Ongpin Fine Art, Peppiatt picked as a highlight the 1831 watercolour by George Petrie (1790-1866), Gougane Barra with the Hermitage of St. Finbarr, Co. Cork, Ireland as a very good example by a rare Irish artist: “the colours are amazing and I love the dramatic beam of light”. 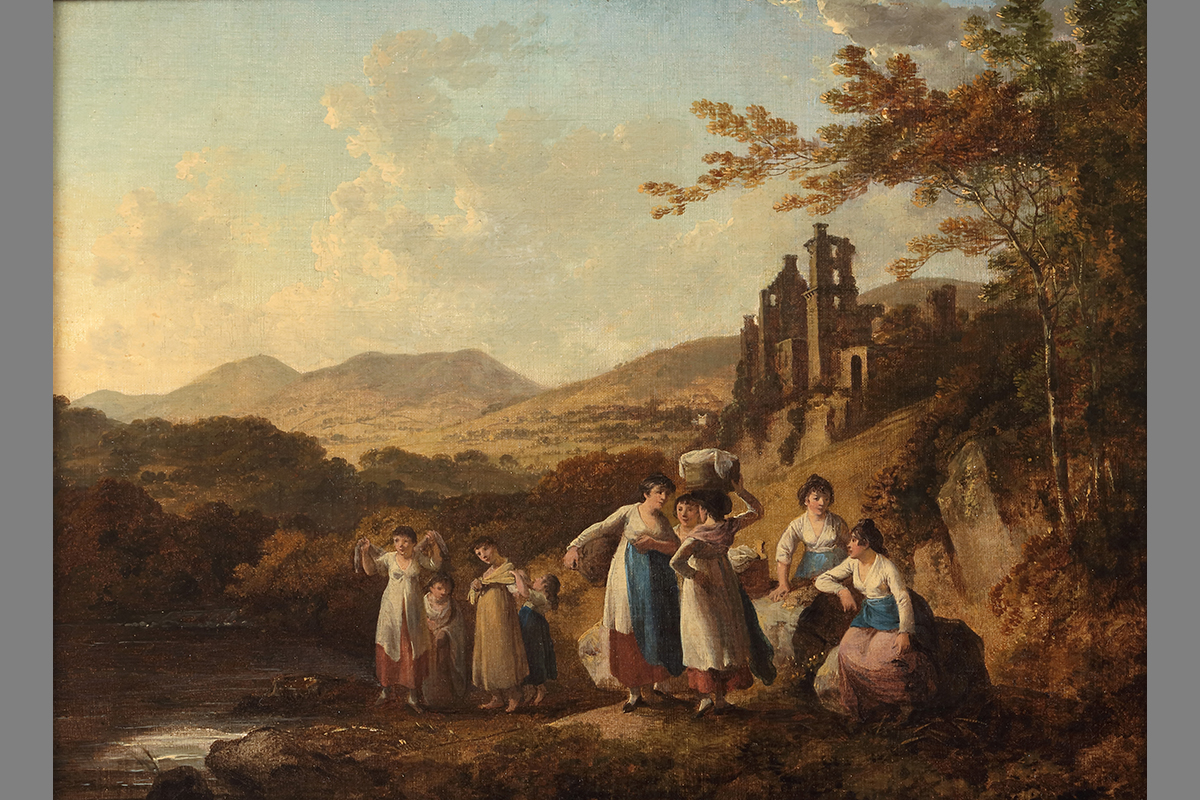 Massimo Listri is an Italian photographer who captures the majesty of interior landscapes. At Tomasso Brothers Fine Art: an exhibition of his large-scale photographs of museums, in particular sculpture galleries, complemented by three-dimensional works from the collection of Tomasso Brothers. Listri’s symmetrical compositions lead the eye into the framed pictorial space; the works convey a sense of awe while celebrating the intricacy of grand architecture in some of the world’s most illustrious museums. 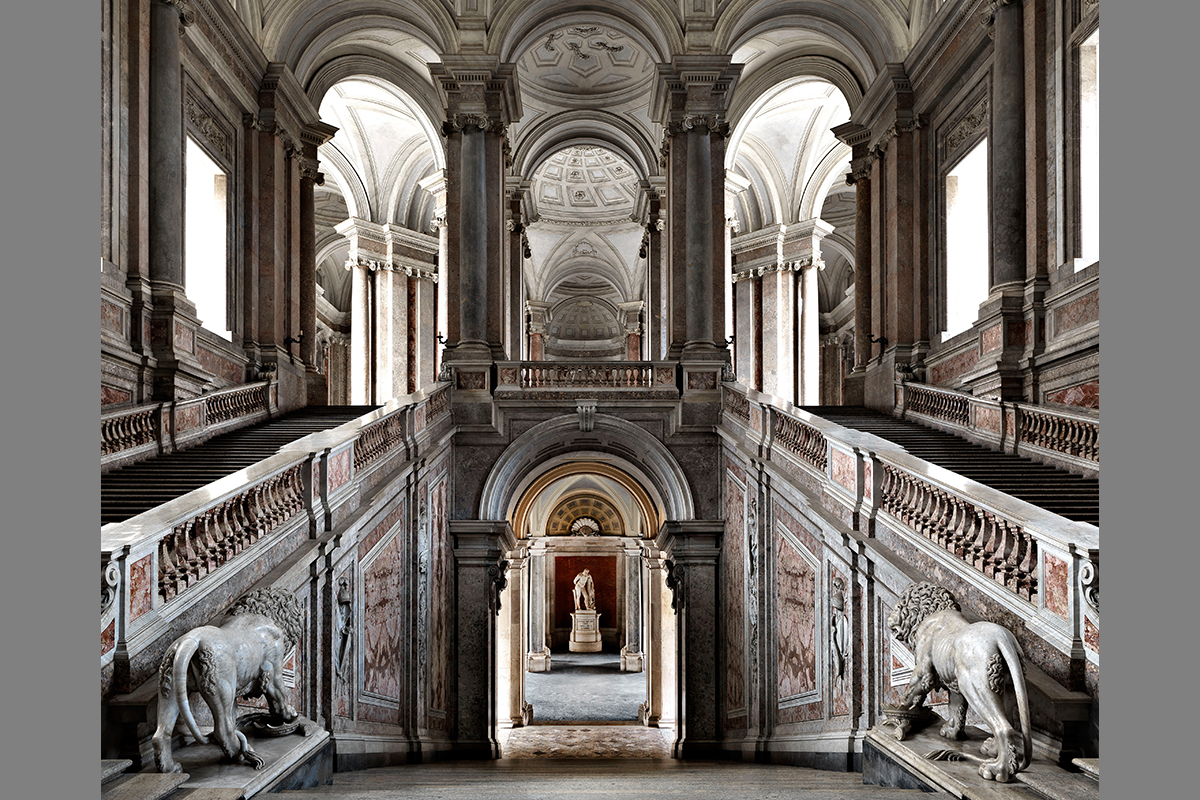 Ben Elwes Fine Art has assembled a group of works with an Anglo-American theme. Particularly appropriate, given that 2019 marks the bicentenary of the birth of the great 19th-century British artist and critic John Ruskin (1819-1900), is a c1879 watercolour on paper which he owned, having acquired it directly from the American artist, Thomas Moran (1837-1926).

Moran was renowned for his majestic landscapes of the American West and his work was much admired by Ruskin. Moran’s view of Utah depicts Mount Superior, as viewed from Alta, Little Cottonwood Canyon, Utah, located in the Wasatch Mountain Range.

Executed en plein air, rather than in the artist’s studio, the drawing was part of a commission from the Eastern Pacific Railroad, to promote tourism in the region. 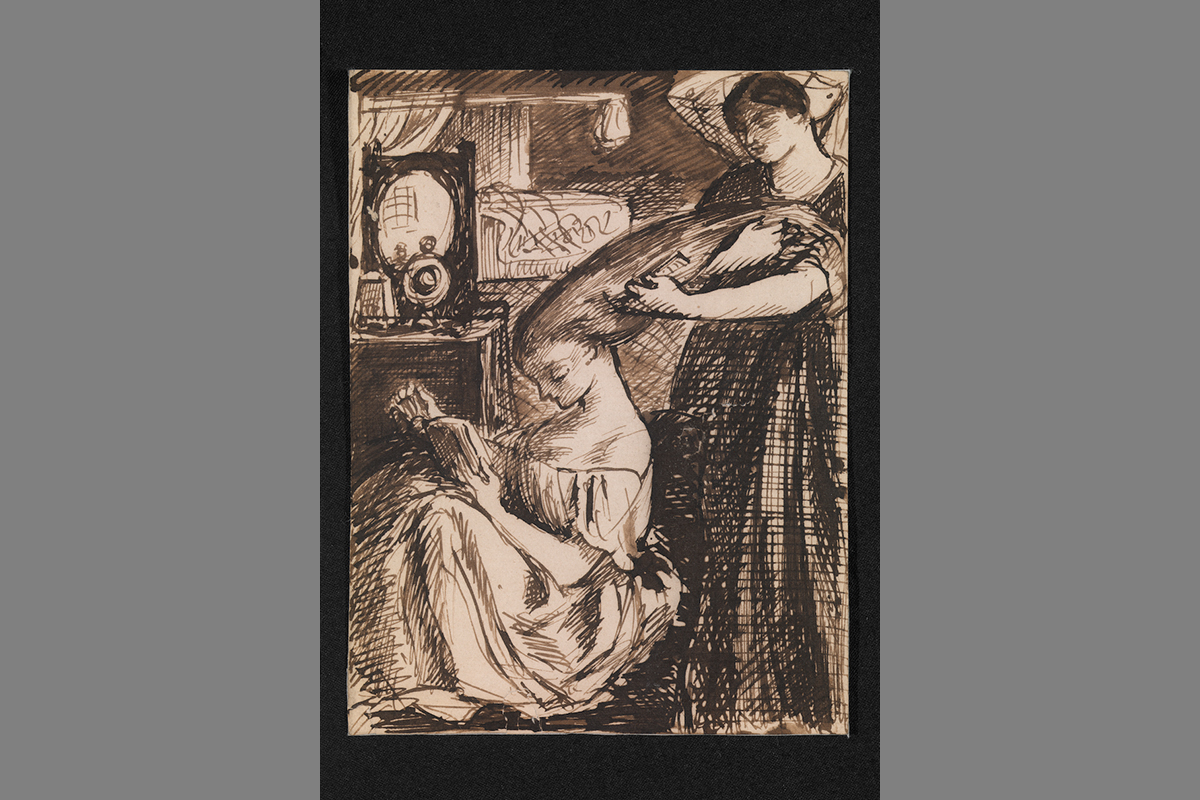 Lampronti Gallery joined this Winter’s series of exhibitions with a selection of current highlights at their Duke Street premises, among which was an important pair of hunting scenes by Jan Fyt (Antwerp 1611-1661): Hounds and a hooded falcon with dead game, and Hounds with French partridges at bay. A pupil of the famous still life painter Frans Snyders (1579-1657), Jan Fyt is an important artist of compositions representing game, animals and hunting equipment within landscapes. Fyt has a naturalistic approach to details, from the dogs’ fur to the poses and expressions of the animals, and the works reveal all his talent.

At Colnaghi, Dangerous Beauty, featuring works spanning the ancient to the present day, with an emphasis on the female form. The connections between beauty, horror, seduction, guile, femininity, erotic desire, violence and death have fascinated artists since time immemorial, from femmes fatales such as Medusa in the Greek world, to Eve and Delilah in the Judeo-Christian tradition. Highlights included a fine pencil drawing by Karl Parsons that perfectly epitomises the type of portraiture fashionable in British high society during the 1920s and 1930s. The sitter is very likely Patricia Frances, Lady Strauss, an author and politician, who stood (unsuccessfully) for the Labour Party in Kensington South at the 1945 General Election. She wrote biographies on Aneurin Bevan and Stafford Cripps and served as a war correspondent with the New York Herald Tribune. 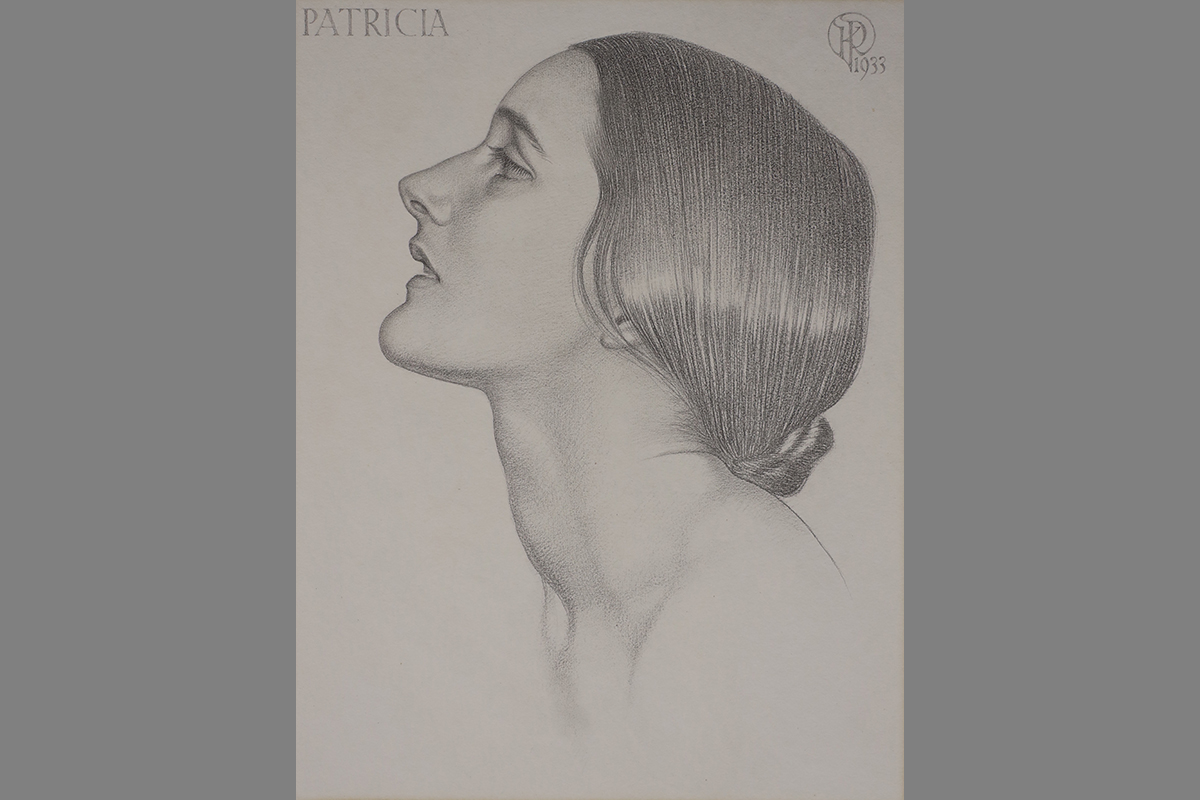 M & L Fine Art presented Giacomo Manzù: bronzes from a private Italian collection, ten sculptures, all acquired during Manzù’s lifetime (1908-1991). Each, an eloquent example of this Italian artist’s subtle and delicate modelling, and his skilful treatment of their bronze surface finish. In addition, the exhibition featured paintings and works on paper focusing on the artist’s recurring themes: still lifes, female portraits and religious imagery, including seated cardinals, Manzù’s most celebrate image (he created important liturgical works for the Vatican). In 1989 Italy presented a large sculpture by Manzù to the United Nations in New York; it stands today in the UN Plaza. 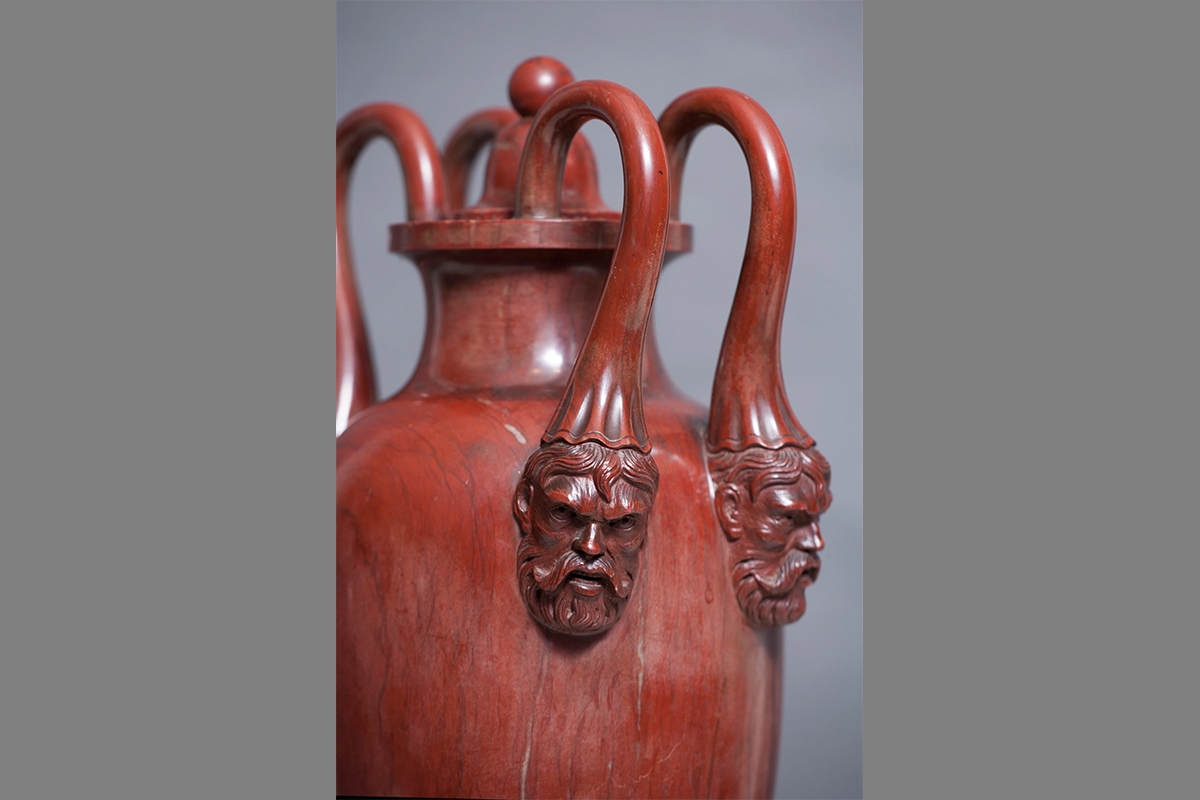 Galleria Carlo Virgilio & C. of Rome brought together Selected Drawings focused on neoclassical and academic works of the 19th and early 20th century. Among the highlights was an 1803 pencil portrait by Jean-Baptiste Wicar (1762-1834) of Antoine Christophe Saliceti. A politician and diplomat in the French Revolutionary era, Saliceti (1757-1809) was a leading supporter of Napoleon Bonaparte.

Muses, Heroines, and Saints: Women in European art, 1600-1900 could be seen at Callisto Fine Arts, presenting images of women in the varying roles they have played in figurative narrative European art over the centuries, including woman as symbols of virtue, or sensuality, such as a depiction of Mary Magdalene by Cesare Fracanzano (1605-1651) with its hints of eroticism.

Objects of great beauty and durability were the focus at Brun Fine Art, which presented an exhibition of Pietre Dure – Headstones, Marbles, Mosaics: precious marble, inlaid works of art and sculpture.

S.Franses displayed a Giant Leaf Tapestries of the Renaissance, influenced by the discoveries of tropical lands, and exotic flora and fauna. 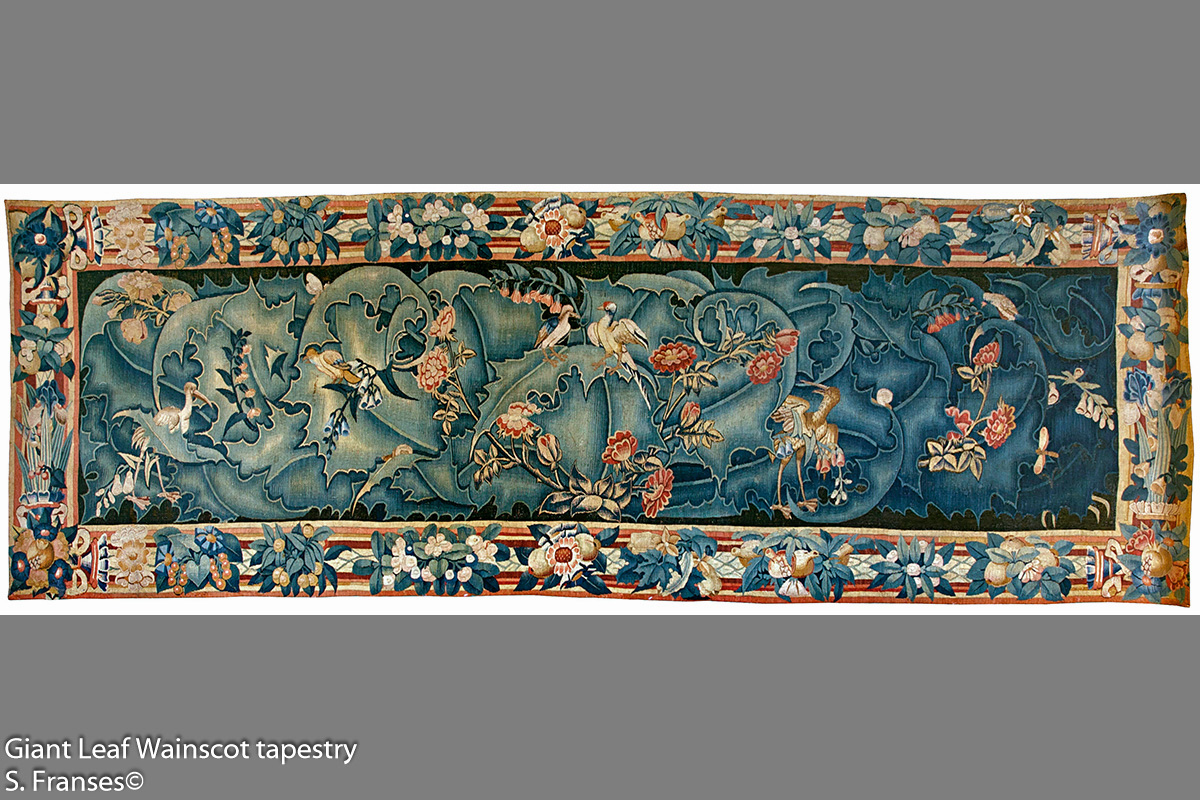 Ordovas marked the 80 years since Peggy Guggenheim’s little known London gallery, Guggenheim Jeune, closed prior to the outbreak of World War II, showcasing her parallel collecting interests in Abstraction and Surrealism through a display of works by Jean (Hans) Arp  and Yves Tanguy. 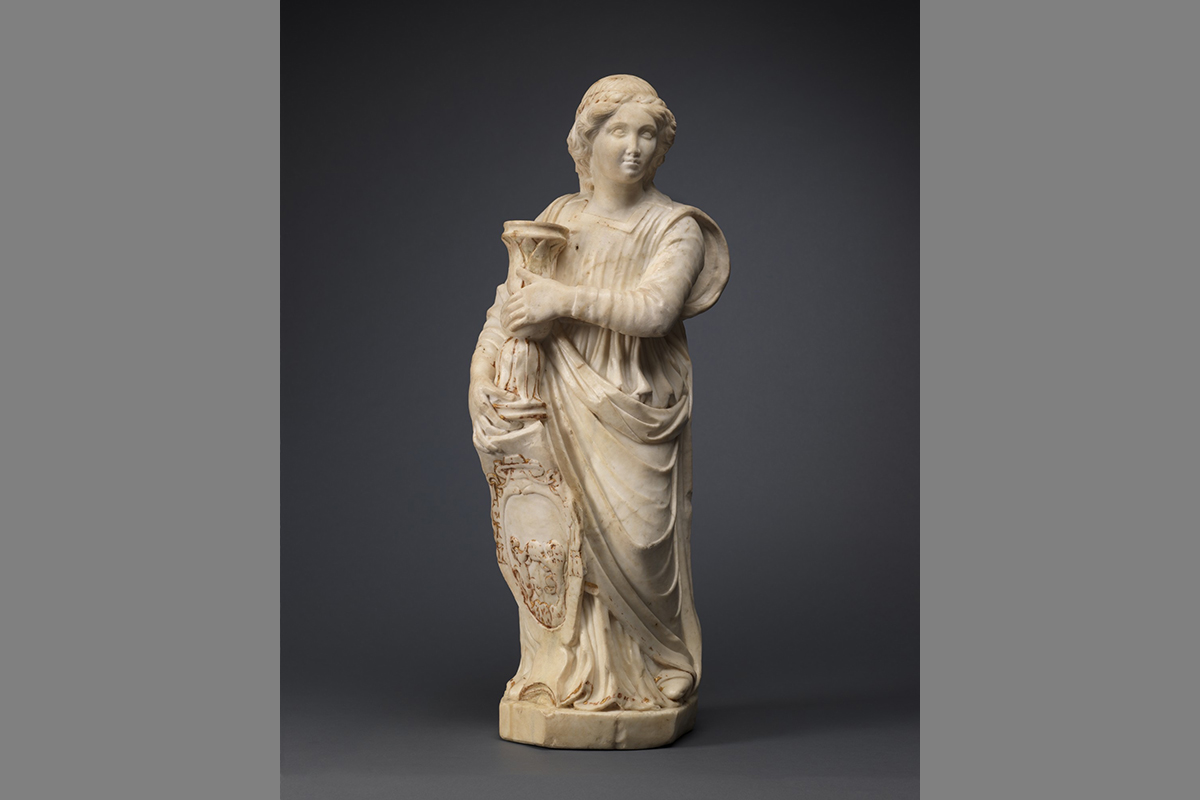 Among the varied events programme: a discovery talk by Arthur K. Wheelock Jr. about Vermeer’s genre paintings at partner museum, the Wallace Collection (held on Saturday 30 November ); at the Tom Dixon shop in Coal Drop Yard, King’s Cross was a selection from Sotheby’s Old Master Paintings sale on view from the 27 November, and an evening of discussion took place at Laocoon Gallery on Wednesday 4 December, led by the exhibition’s curator Monica Cardarelli, on the Female Gender in Twentieth Century Italian Art. 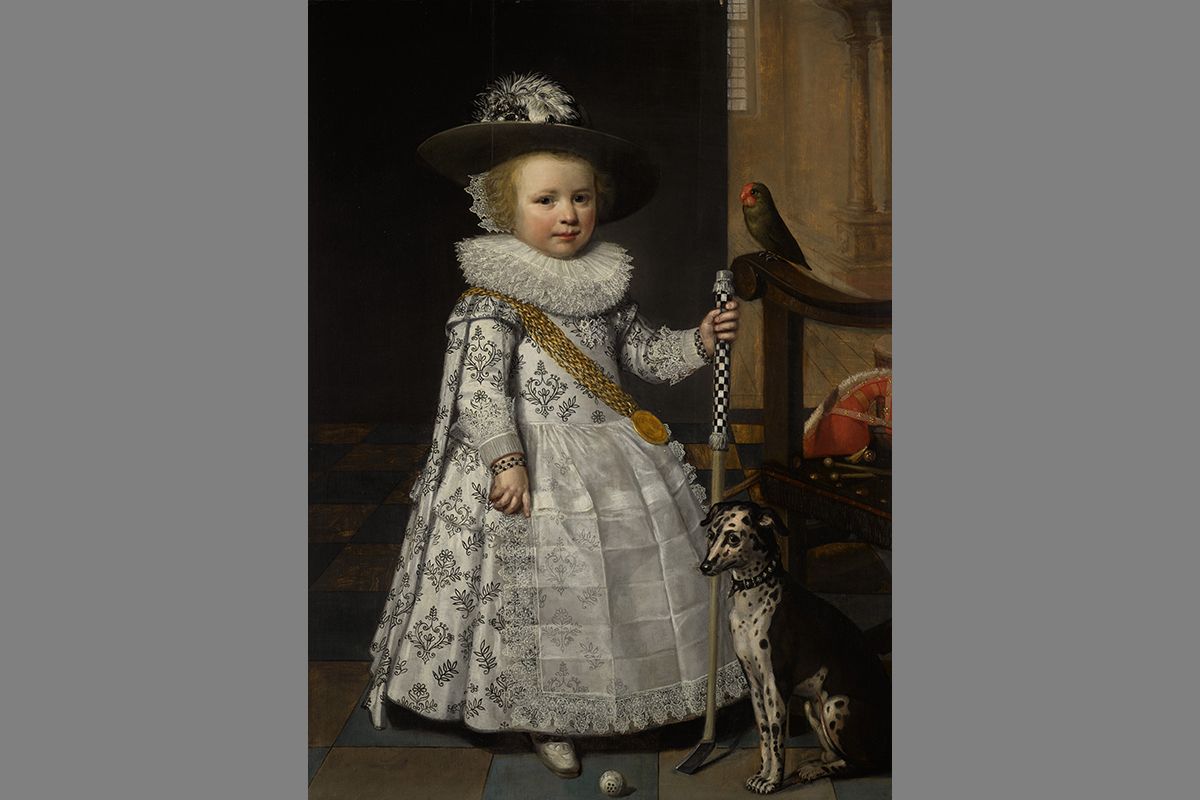 Jewellery in the time of Charles I  at The Weiss Gallery on Tuesday 3 December, illustrated by their exhibition Van Dyck in England: The King’s Principal Painter and his Caroline Legacy. Gallery Director Florence Evans held conversation with preeminent fashion historian Professor Aileen Ribeiro, and Senior Curator of Medieval & Early Modern Collections at the Museum of London, Hazel Forsyth.

Museum partner the National Gallery  hosted a lunchtime talk with London Art Week panellists discussing careers in museums, galleries and auction houses on Monday 2 December, as part of their public educational programme. This was followed by the inaugural LAW Winter symposium Conversations on Collecting. At the end of the week, National Gallery expert Carlo Corsato discussed paintings acquired for the nation from various London Art Week galleries. 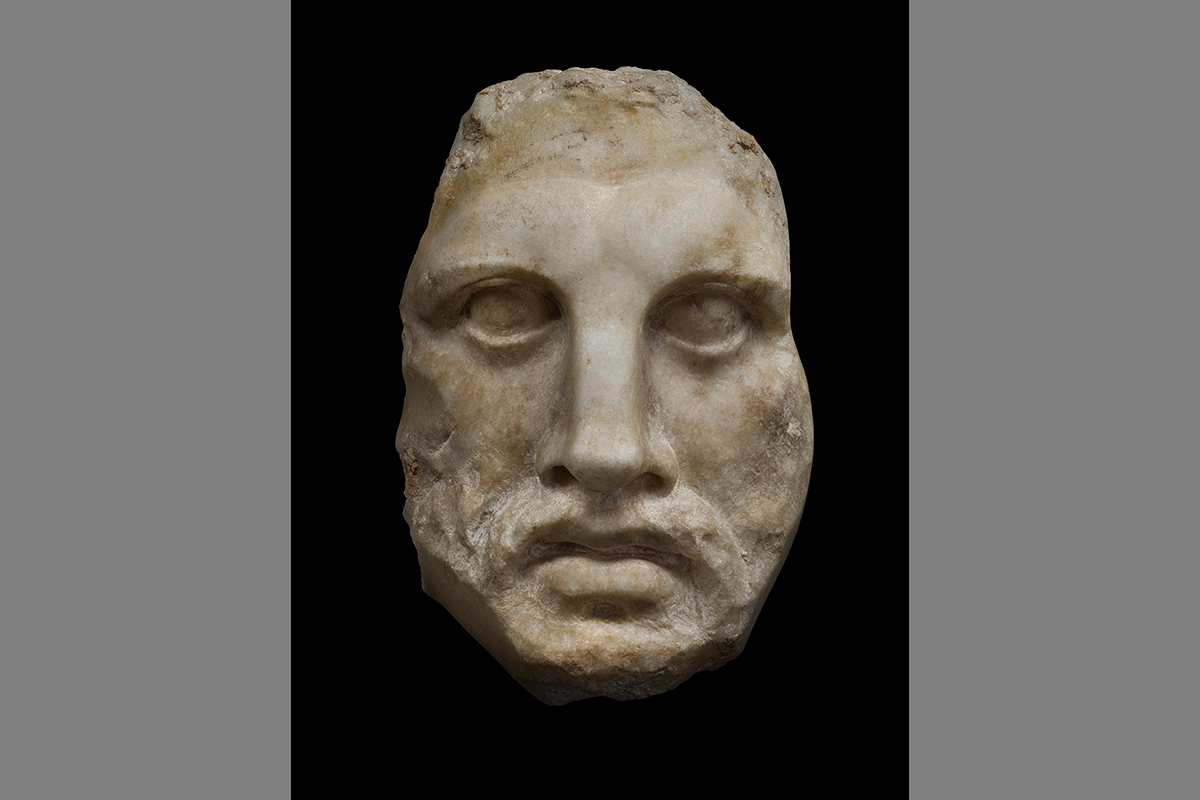 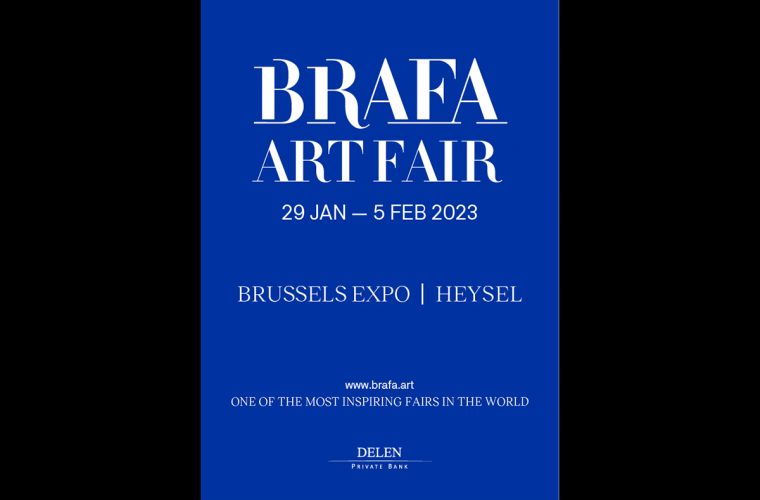