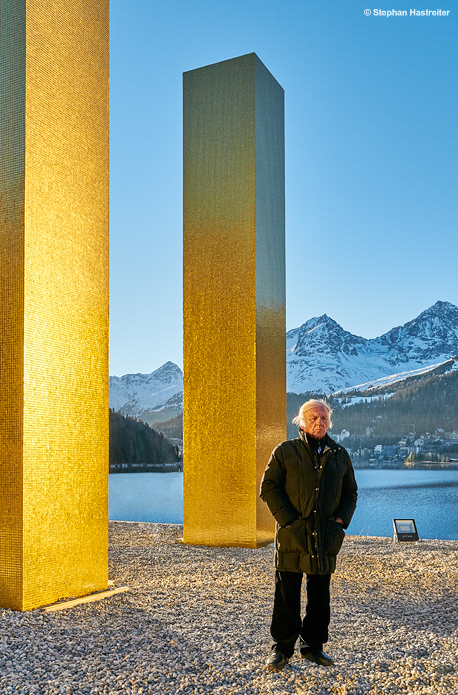 The Sculpture that dissolves into light.

The sculpture by the German Artist Heinz Mack, has been put on display. Several hundred of guests attended the unveiling ceremony of the nine golden steles on the shore of  Lake St. Moritz; the steles unveiling was accompanied by the world´s premiere musical composition the Sky over nine Trumpets by Bernard Franke.

The St. Moritz Winter season kicked off with a cultural highlight: The Sky Over Nine Columns. “The colossal natural setting of the Engadin Valley shows the sculpture to its best advantage,” said  Ralph Dommermuth, (Foundation Kunst und Kultur) at the opening ceremony.

The sheer sensuality of the sense of sight.

That is exactly how i had always envisaged it, said the enthused Artist Heinz Mack. The unique and intensive light of the Engadine lets the sculpture shine so brightly that it all but dissolves into light, and is no longer perceived as a material sculpture. The nine Steles turn into objects that radiate their very own energy. It is the sheer sensuality of the sense of sight.

The Installation, The Sky Over Nine Columns, which the Artis Heinz Mack created between 2012 and 2014 consists of nine, squared-shaped steles that soar up seven and a half meters and have a footprint of 14 by 19m with a light reflecting surface comprising of more than 85,0000 tesserae made of 24 carat-gold leaf.

The Journey of this exceptional giant around the world is an Art Project that has been conceptualized and realized during several years in a collaboration of the Ralph Dommermuth foundation Kunst und Kultur and Beck & Eggeling International Fine Art.

The sculpture The Sky Over Nine Columns, will remain on display on the shore of Lake  St. Moritz until Spring.

©The Sky Over Nine Columns