Since 1973, the Volvo Ocean Race has provided the ultimate test of a team and a human adventure like no other. Over four decades it has kept an almost mythical hold over some of the greatest ever sailors – and the 2017-18 edition will take the teams 45,000 nautical miles around the world, across four oceans, touching six continents and 12 landmark Host Cities. 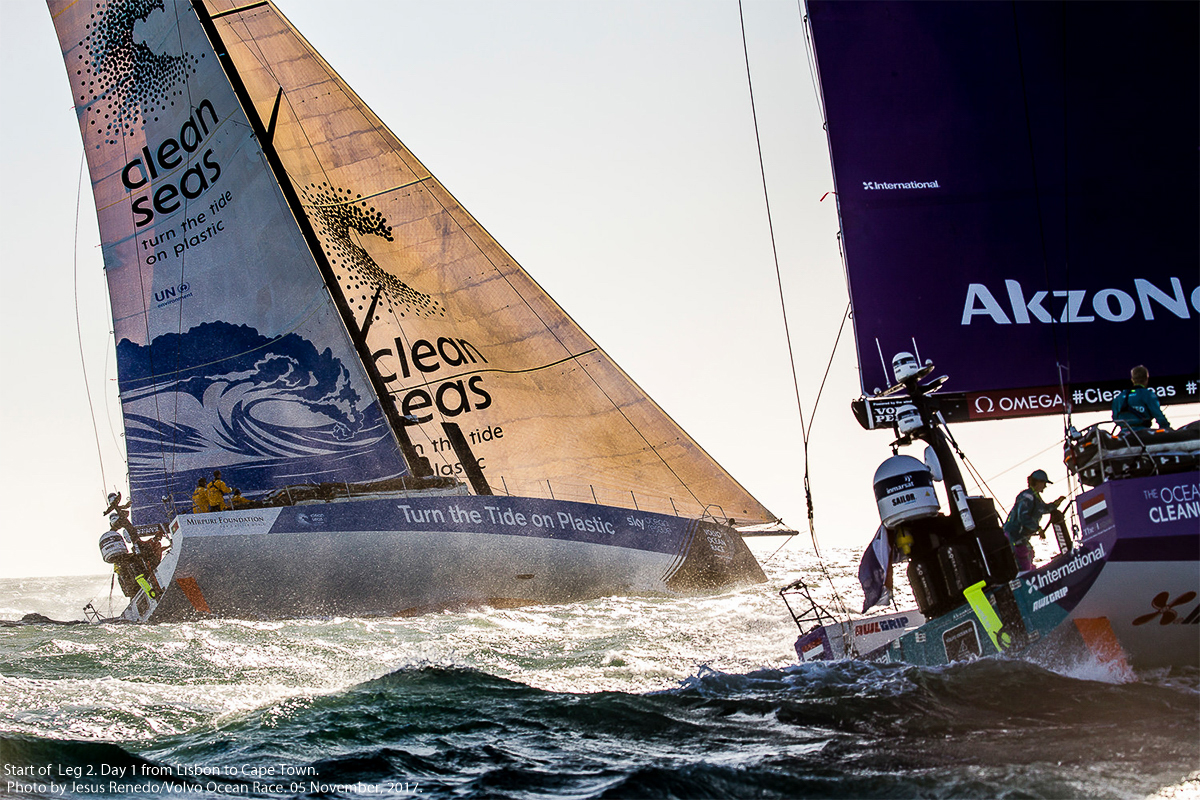 The Volvo Ocean Race is often described as the longest and toughest professional sporting event in the world, sailing’s toughest team challenge and one of the sport’s Big Three events, alongside the Olympics and America’s Cup.

To truly understand the race, though, it’s better to think of it in a way the athletes who take part will recognise immediately.   Put simply, the Volvo Ocean Race is an obsession, and many of the world’s best sailors have dedicated years, even decades of their lives trying to win it.

Take Sir Peter Blake, who competed in the first edition of what was then the Whitbread Round the World Race in 1973-74 and came back again and again until he finally conquered his Everest, securing an overwhelming victory with Steinlager 2 in 1989-90. Only then was he able to fully turn his attention to other projects.

The Volvo Ocean Race has been creating legends since 1973 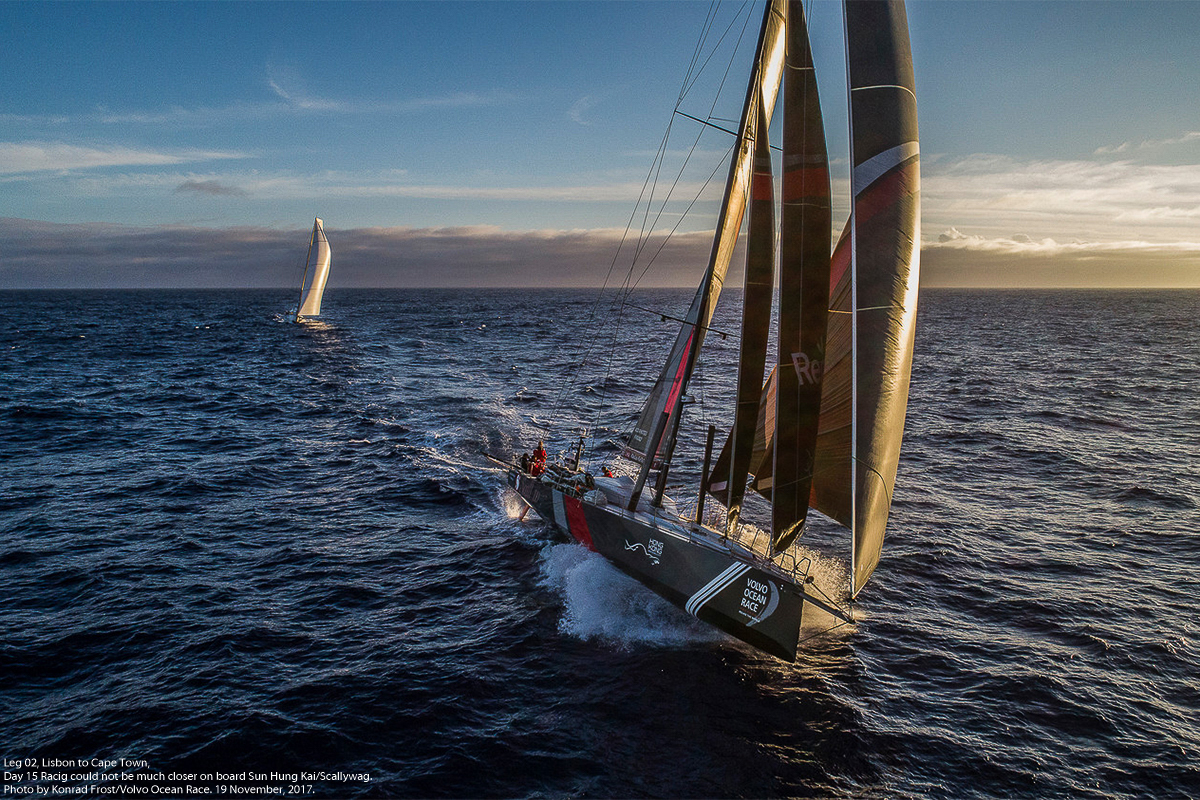 Leg 02, Lisbon to Cape Town, Day 15 Racig could not be much closer on board Sun Hung Kai/Scallywag. Photo by Konrad Frost/Volvo Ocean Race. 19 November, 2017.

A total of 324 sailors took part in the first edition – all of them pioneers – and since then, thousands more have shown courage, sacrifice and skill to write their names in the history of the race.

The race sits, just as it always has, at the intersection of human adventure, and world-class competition. Thanks to the work of the Onboard Reporters embedded with every team, fans are given a unique insight into just what it takes to win a race that is relentless in its demands – as teams give everything they have, 24 hours a day, in pursuit of the tiny advantages that can make all the difference. 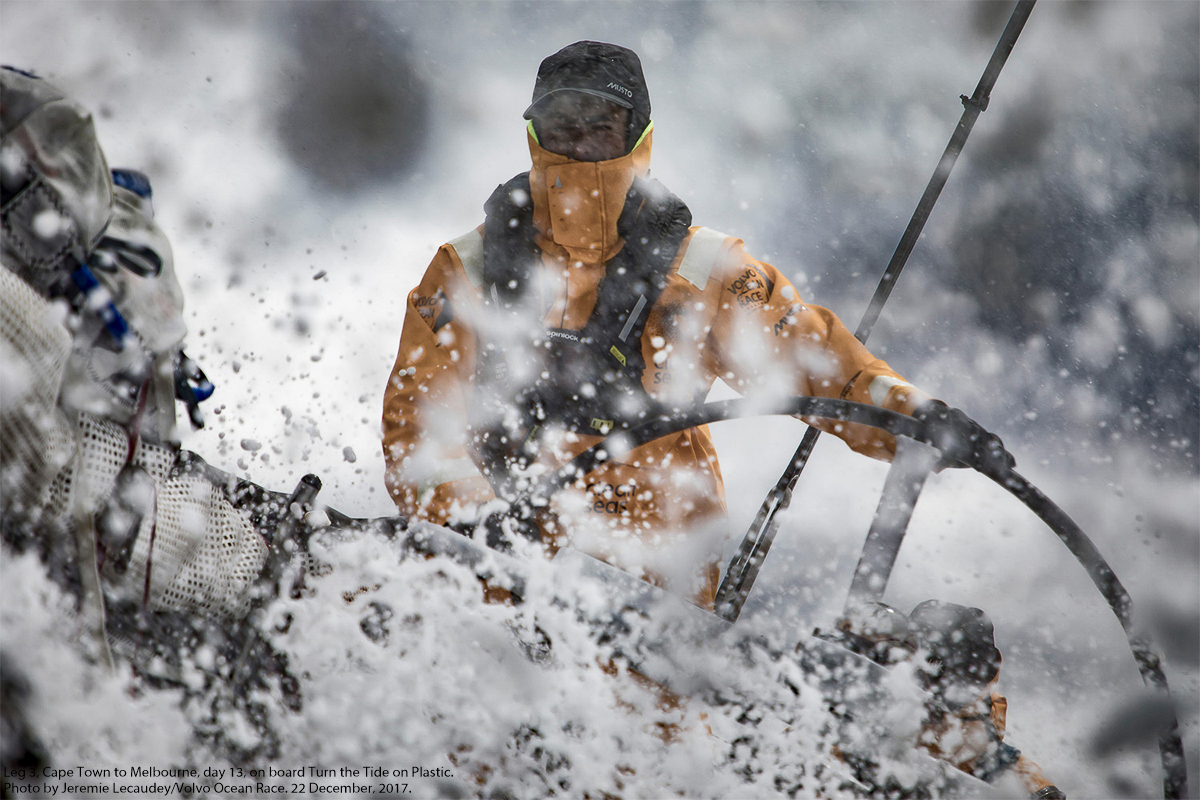 Leg 3, Cape Town to Melbourne, day 13, on board Turn the Tide on Plastic. Photo by Jeremie Lecaudey/Volvo Ocean Race. 22 December, 2017.

Because make no mistake – the competition is fierce. In the current era of One Design racing, the only way to win is by sailing harder, and smarter, than your competitors. The race is won out on the water; not in the design phase.

There is no prize money for the winners, but seeing your name etched into one of the silver rings of the Volvo Ocean Race Trophy is a prize beyond compare for sailors who grew up with dreams of emulating the legends of the race – heroic figures who dedicated their professional lives to chasing victory – people like Blake, Éric Tabarly, Conny van Rietschoten, Grant Dalton, Paul Cayard, Ian Walker.

The race’s concept is simple: it’s a round-the-clock pursuit of competitive edge and the ultimate ocean marathon, pitting the sport’s best sailors against each other across the world’s toughest waters.

Racing one-design Volvo Ocean 65s, the world’s best professional ocean racers drive themselves to out-work and out-perform their competition around the globe. 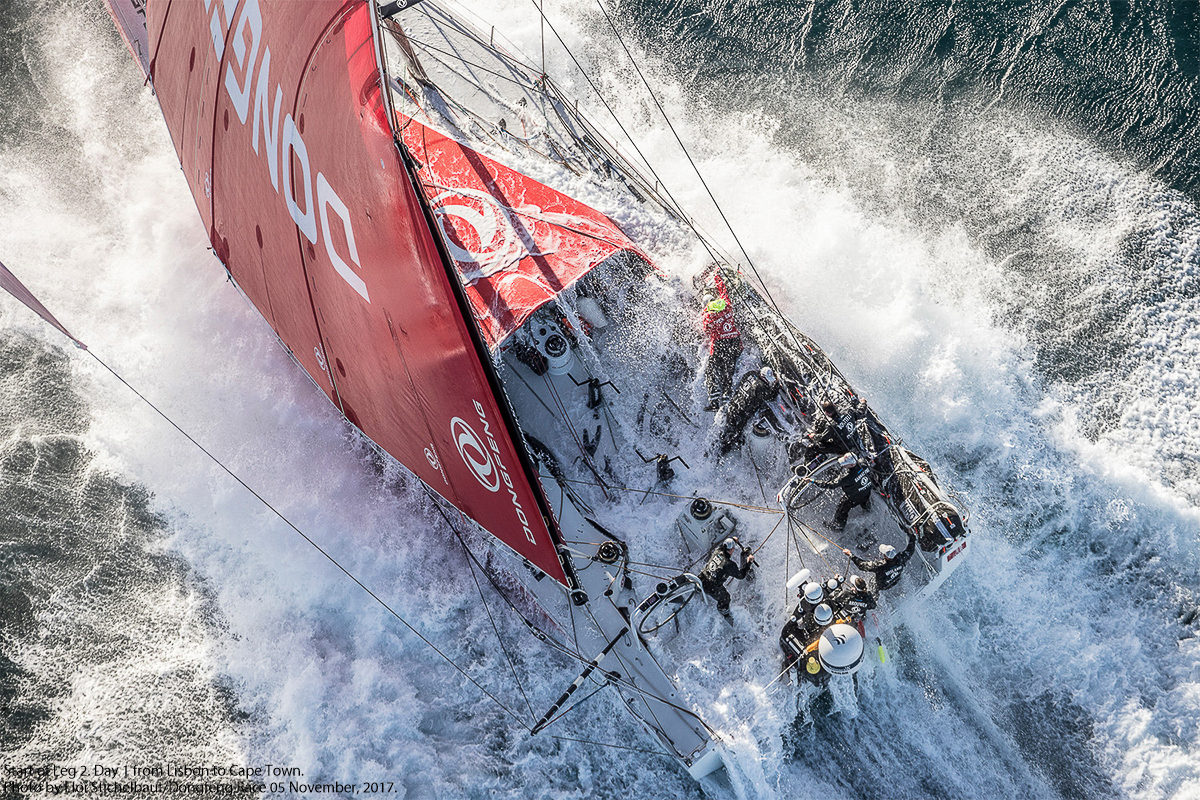 It’s relentless: the importance of winning, the adventure of life on board, the transformative effect on the sailors — all of these combine to give the race its power and depth.

In 2017-18, there is a renewed emphasis on the Southern Ocean and a new set of rules too – incentivising mixed crews of male and female sailors and more strategic innovation out on the racecourse.

A total of 2.4 million people visited the Race Villages in the last edition, to get a first-hand taste of the race. Millions more followed the action on our digital platforms and this time fans will be able to get even closer in person and online, with a newly imagined pit lane experience at the Host Cities and more live updates from the boat than ever.

After 12 editions and half a million miles, racing resumed again on October 22 when the teams set sail from our home port of Alicante and will conclude in The Hague in June 2018.

This is the last, and the shortest leg of the race at just 700 miles. It will start from Gothenburg on Sweden’s west coast on 21 June and race south through the North Sea to The Hague. A mark has also been added off the Danish city of Aarhus, giving sailing fans an opportunity to see the boats in action, and up close and personal, as they complete the final sprint.

What will make the difference?

Weather: It’s Northern Europe and it’s the summer, so this is less about climate and all about weather. The fleet could get anything from a slow crawl south in light winds, to an upwind slog in 35 knots.

Land effects: Once again, the racing will take place close to the shore, and the daily cycle of heating and cooling of the land and its attendant sea breezes and night breezes will be important. As will the impact of headlands and valleys, as they distort the clean wind flow. And of course, no one wants to hit the bottom.

The Tides: The tide flows strongly up the English Channel, flowing in from the west to the east for six hours, then back out again from east to west. While the tide flows into the North Sea from the north – around the top of Scotland – and so it ebbs from the south to the north. The two inbound flooding tides meet in the North Sea, and that will create some complexity that will be important on this leg, as they will have to sail through it. A good tidal chart should reveal all however…

Sea state: The North Sea is notoriously shallow, and that means it cuts up real ugly when it’s windy. If it blows hard then this leg could be as uncomfortable as any of those out in open ocean.

The ‘fly-by’: A mark has been added off the Danish city of Aarhus where the fleet will complete a ‘fly-by’ offering a one-off view of the race for the Danish public. Denmark has a long and rich history with the Volvo Ocean Race, twenty-five Danish sailors have competed in the race to date and two teams have raced under the Danish flag – SAS Baia Viking in 1985-86 and Team Vestas Wind in 2014-15.

And then it’s all over bar the shouting?

The Dutch are legendary offshore sailors, right back to Conny van Rietschoten – the original ‘Dutch Flyer’ and the only skipper to win back-to-back Volvo Ocean Race/Whitbread trophies. So you can expect an incredible welcome for the fleet in The Hague, especially if home sailors are winning…

The Hague goes from pit-stop to finish line
Having hosted the Volvo Ocean Race for the first time in a short but (very) sweet pit-stop in 2014-15, this famous city in the Netherlands will host the legendary race’s finish in 2017-18.

After sailing 45,000 miles around the planet, The Hague will be the Volvo Ocean Race fleet’s final destination – and the arrival promises to be an unforgettable moment for both the sailors and thousands of spectators lining the dock.

The eyes of the sailing world will be on Scheveningen when the boats, including Dutch entries team AkzoNobel and Team Brunel, finish in the harbour after nine months of intense battling.

The Hague, an international city by the sea
Like no other city in the Netherlands, The Hague offers a unique combination of city life and beach life. The Hague is home to Vermeer’s famous ‘Girl with a Pearl earring’ and the world’s largest collection of paintings by Mondrian. The city’s two seaside resorts – Scheveningen and Kijkduin – boast seven miles of sandy beaches, and getting to the bustling, historic city centre only takes you fifteen minutes.

The Hague’s bustling downtown area has far more to offer than the landmarks Binnenhof, Noordeinde Palace, and Peace Palace. Boutiques, cafes, concert and dance venues, galleries, flagship stores, museums and restaurants promise something to everyone who loves culture, shopping and nightlife. 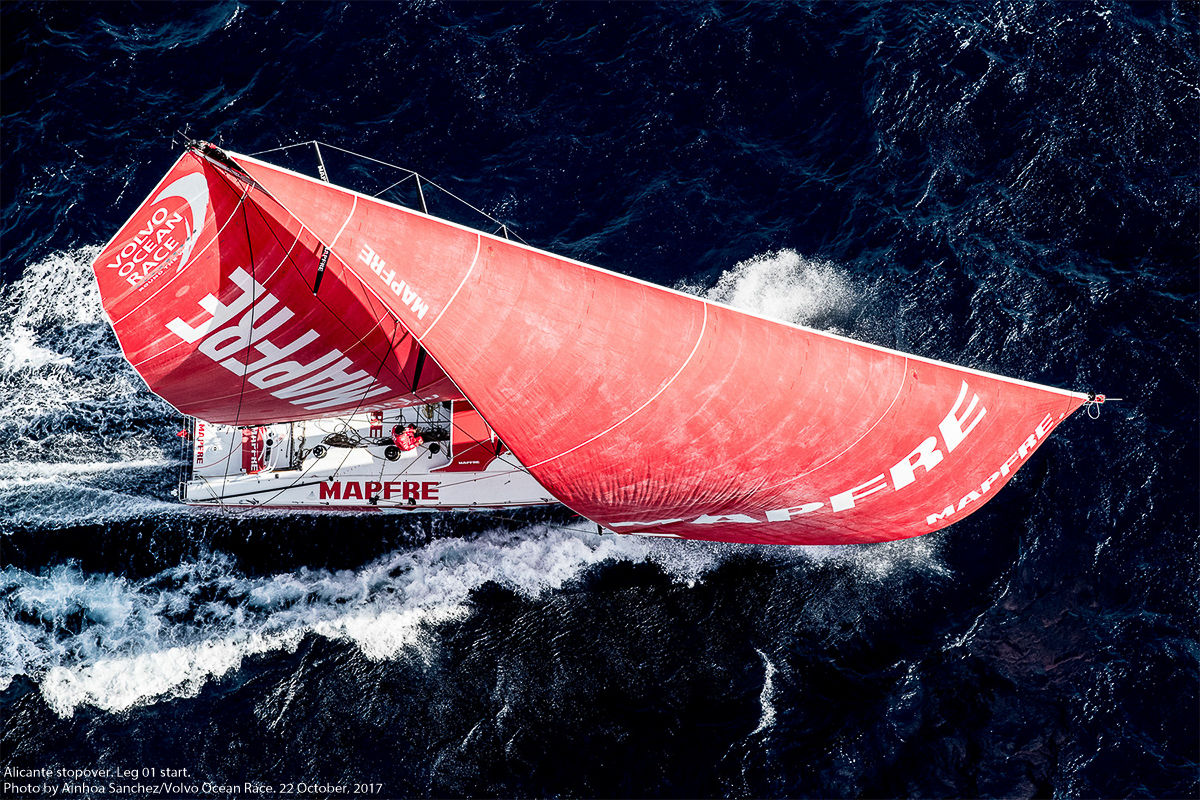 A RACE OF SUPERLATIVES!