A Fantastic Race in an Incredible Place!

SAINT-BARTH  – Les Voiles de Saint-Barth has been a bucket list event for sailors since its inception in 2010, and for its ninth edition, scheduled April 8-14, 2018, the competition is already stacking up with top players, including U.S. maxi teams Rambler 88 and Proteus, both committed to compete. For the first time in the regatta’s history, a fifth day of racing has also been added to the schedule. 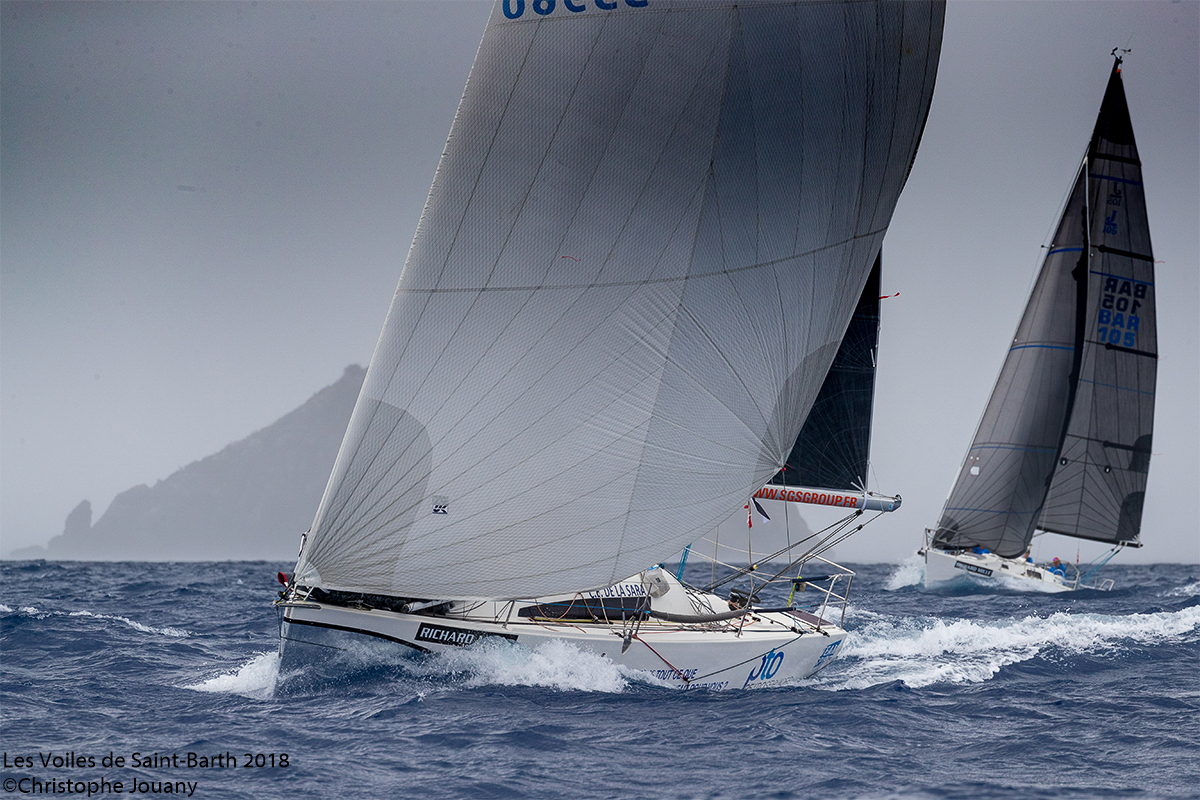 «It’s something we’ve been thinking about for a while now and after receiving positive feedback from competitors, we decided to go ahead and move forward with the plan,” said Regatta Director François Tolède adding that the regatta kicks off on Sunday, April 8 and wrap up Saturday, April 14, with racing scheduled for Monday, Tuesday, Wednesday, Friday and Saturday. The official “Day Off” is scheduled for Thursday. “The extra day of racing will bring even more competitiveness and fun to the regatta, which we know is exactly what our participants are interested in!”

“The island was traumatized on all levels—material, human, and economic—but there is an incredibly strong sense of solidarity in Saint Barth, which allowed us to rapidly get back on our feet. That is why we are able to produce the 2018 edition of Les Voiles de Saint-Barth in the best possible conditions this April. Understandably, certain aspects of the infrastructure were badly damaged and we  probably have slightly fewer boats than in past years. But our goal today is to promote a return to normal and move on to other things,” declare Les Voiles’ organizers François Tolède and Luc Poupon. 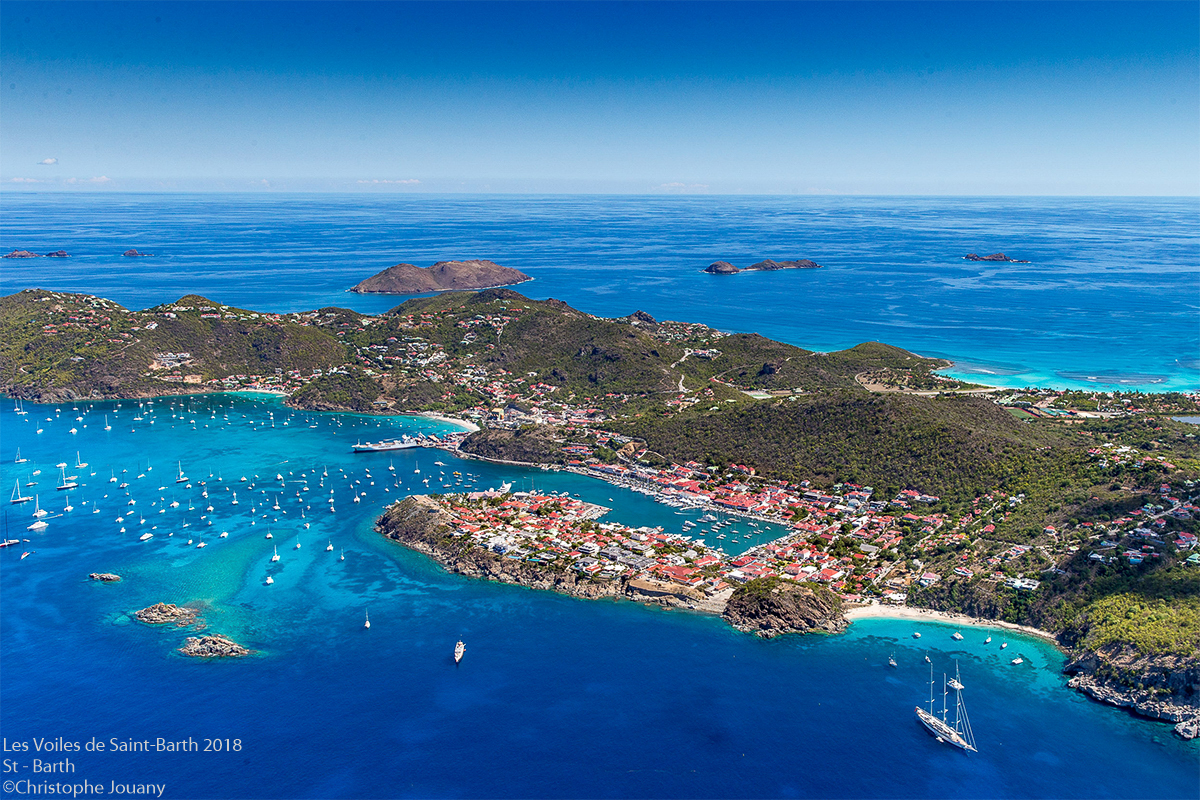 “The desire is there, on our part, as well as that of the sailors,” assure the organizers, who in producing the regatta with their sponsors and staff, decided to concentrate on the fundamentals, with more solidarity, more conviviality, and also more competition. As a result, the regatta will now have two exciting new aspects: a fifth day of racing and the inauguration of a new class!

This year the logo for Les Voiles de Saint-Barth has changed from blue to green, to send a very clear message: The 9th edition is “Ready To Launch.”

In addition to monohull and maxi teams, the regatta is known for its world-class multihull fleet, and this year introduces the new Offshore Multihull Association (OMA) Class. Launched to better manage the multihull races, the OMA Class will incorporate the new MultiRule rating and scoring system, which was developed to establish more fair ratings for the boats.

“This is the sixth Les Voiles de Saint Barth for our crew from Seattle, Washington,” said Slyngstad. “The beautiful scenery, great courses, along with the friendly organizers and awesome onshore festivities make this our favorite Caribbean regatta. The Fujin crew had an incredible time last year, and 2018 looks like an even greater turnout of multihulls, so we’re super excited to line up and go again.” 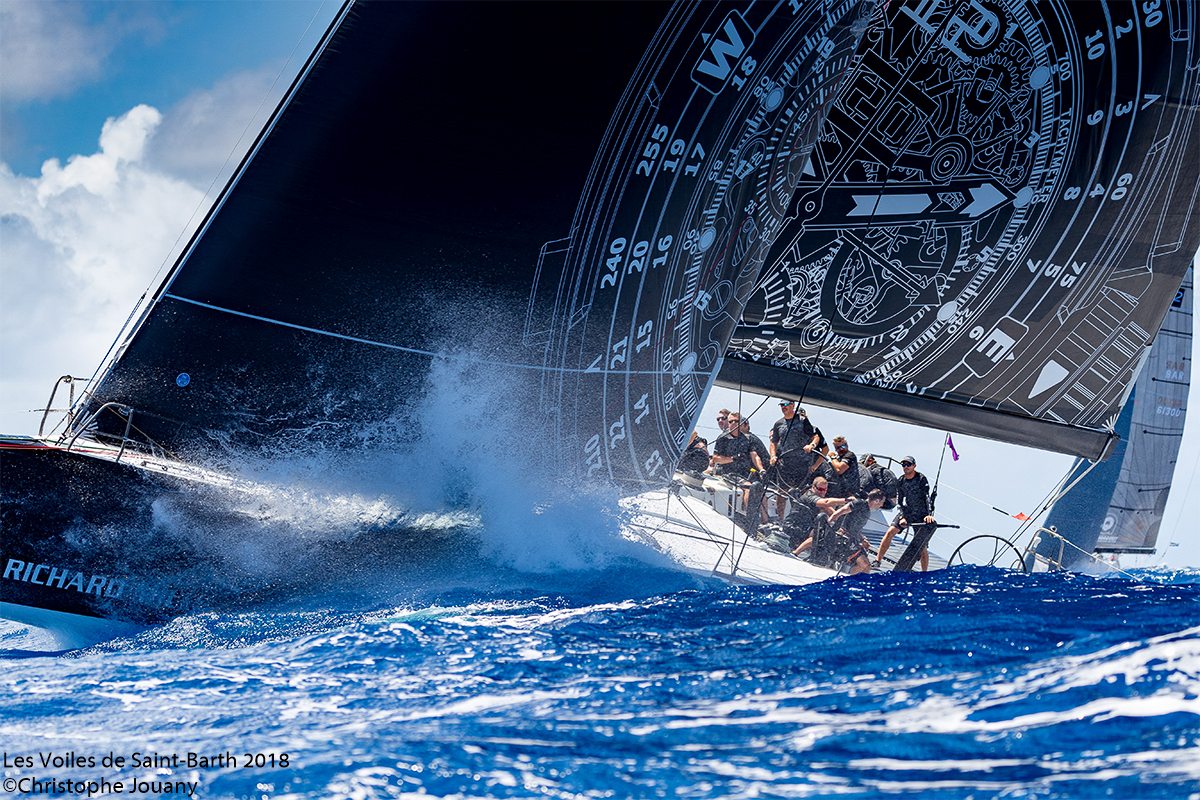 The highlight of the 2018 edition has to be the creation of the Richard Mille Record Trophy. The principle behind it is simple: reward the boat that racks up the best time over a course amongst the islands spanning some 60 miles or so. “The record is open to the fastest classes, namely the Maxis, the Spinnaker 0s and the Multihulls, said Luc Poupon, Les Voiles race director, who first tested the concept back in the 2015 over a 42-mile route between Saint Barth and the island of Tintamarre. “At the time, Lloyd Thornburg’s MOD70 Phaedo 3 completed the course in a stellar time (1 hour and 53 minutes) and the resulting feedback from the racers was very positive.”

Since its inception in 2010, the regatta has attracted top competitors from around the globe with its unique blend of world-class competition and vibrant shore-side entertainment. The ninth edition comes bearing extra bells and whistles, with not only the return of classes dedicated to classic and traditional yachts, but also the addition of a fifth day of racing on the agenda. 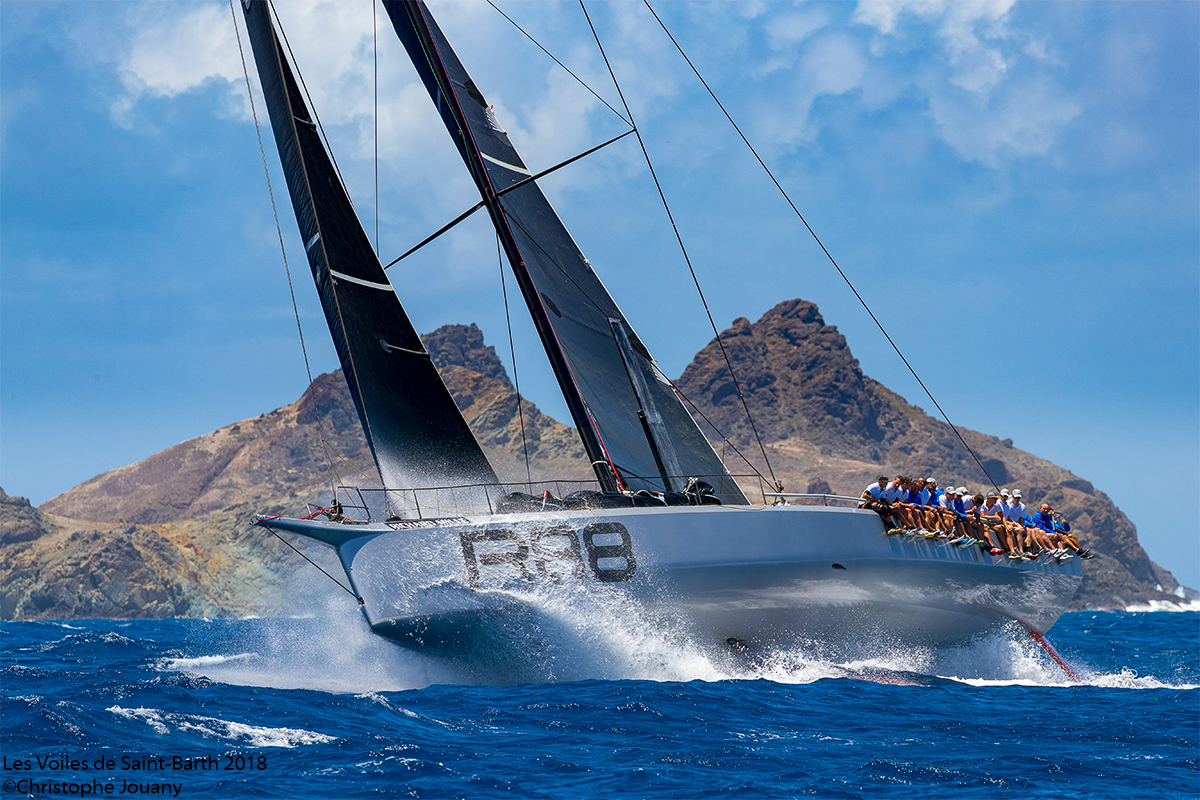 “Our goal above all is to listen to the participants and the extension of the regatta adds to both the competitiveness and the fun that makes Les Voiles de Saint-Barth the event that it is,” said Les Voiles de Saint-Barth Race Director Luc Poupon, adding that the 2018 edition kicks off on Sunday, April 8 and wraps up Saturday, April 14, with racing scheduled for Monday, Tuesday, Wednesday, Friday and Saturday. In addition to a series of nightly concerts and socials, the regatta’s official “Day Off” on Thursday breaks up the on-the- water competition.

“It has been four years since we’ve hosted classes for classic and traditional yachts and are looking forward to these competitive teams to join in the fun again this April,” said Poupon. “With the famed Antigua Classic Yacht Race scheduled for late April on a neighboring island, it is the perfect opportunity for these period yachts to double up on the competition.”

The entry list boasts a number of top maxi, monohull and performance multihull teams representing eight countries, including the Canadian team Touch2Play, which raced in the event for the first time last year. “It’s a wonderful island, a wonderful racing opportunity and it really needs to be on every serious sailor’s bucket list,” said Owner/Driver Rob Butler.“We had heard wonderful things about the island and the regatta and decided to go ahead and do it and are so glad we did. The island is phenomenal and the regatta organizers do such an exceptional job at putting the event on. We’re looking forward to getting back out on the water in April.” 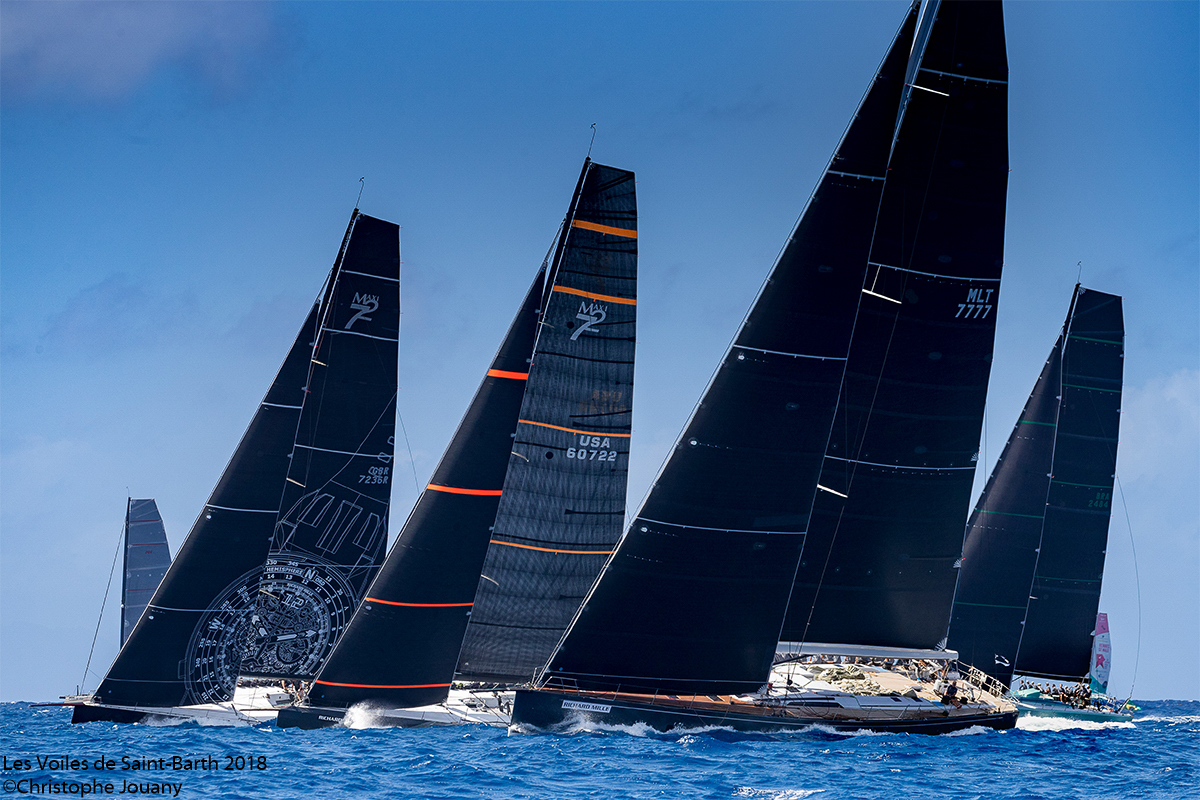 Close to 1,200 sailors of over 20 different nationalities gather each year for the four days of intense competition, in a festive,  friendly ambiance… All set against the magnificent backdrop of the island of Saint Barthélemy.