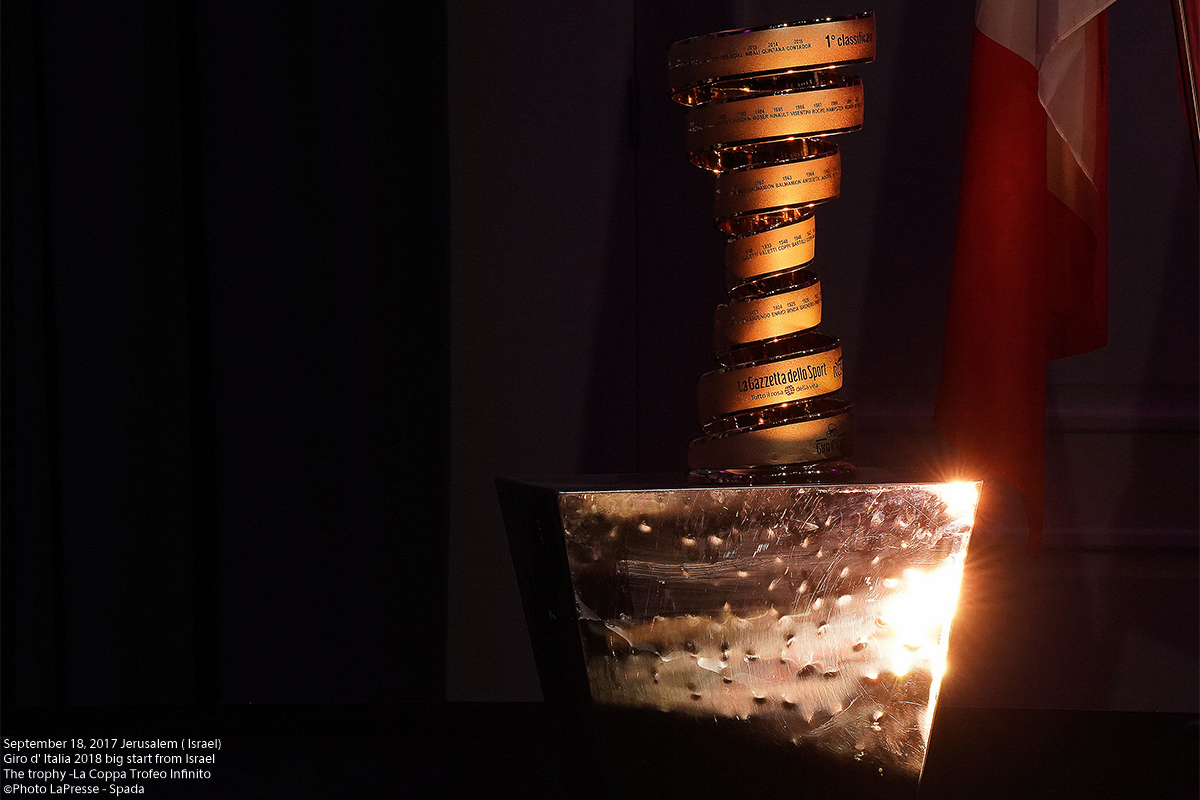 From Israel to Rome for a historical edition

The 101st edition of the Giro d’Italia – organized by RCS Sport / La Gazzetta dello Sport – is scheduled from 4 to 27 May 2018. This year the Corsa Rosa will tell many stories along its route, spanning history, culture and sport.

Chris Froome, through a video, announced his participation in the Corsa Rosa. 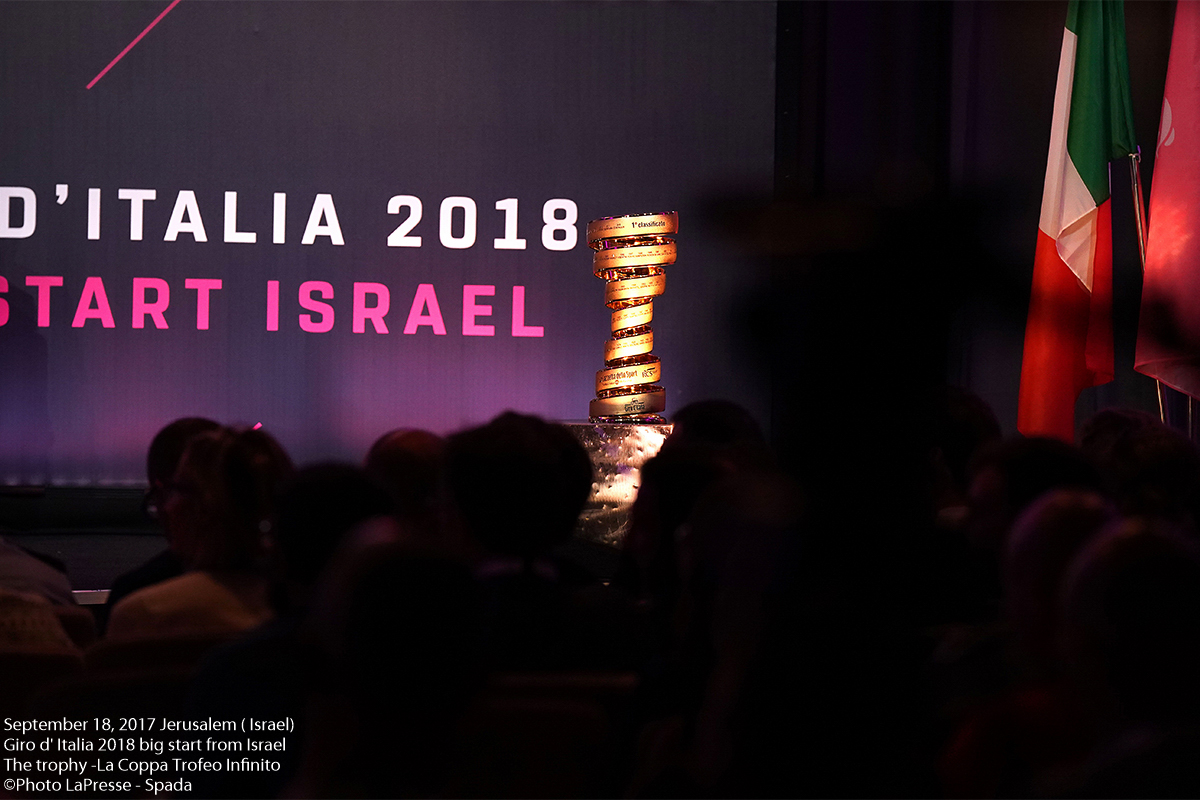 A Grand Tour will start outside the borders of Europe for the first time as, for the 13th time, the Corsa Rosa will begin outside of Italy, continuing the race’s process of internationalization and promoting the concept of ‘Made in Italy’ throughout the World. 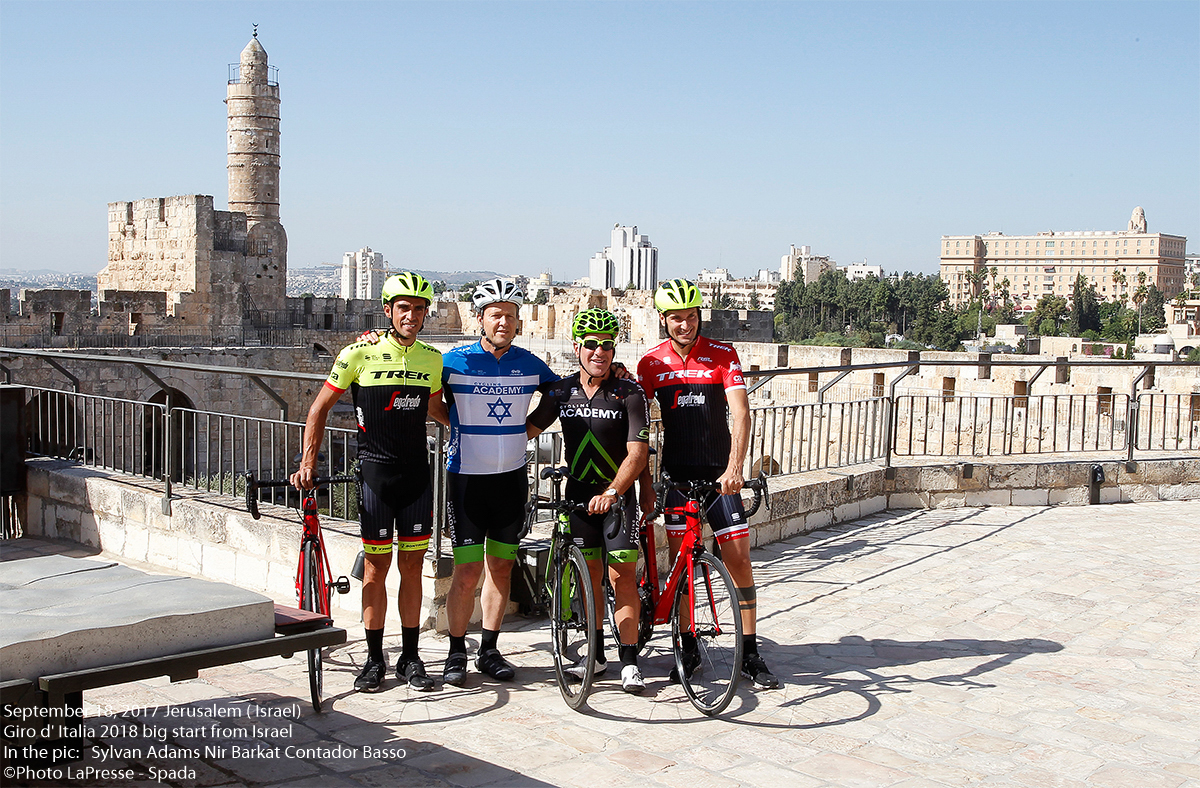 On Friday 4 May, a 9.7km ITT in Jerusalem will decide the first Maglia Rosa. A highly technical route, with numerous bends and small ascents and descents, this will be the Tappa Bartali, commemorating the Italian cyclist who was awarded the honour of ‘Righteous Among the Nations’ and whose name is engraved on the Wall of Honor in the Garden of the Righteous in the Yad Vashem Memorial in Jerusalem.

From Haifa to Tel Aviv, with the finish on the straight seafront after 167km, the second stage is set to suit the sprinters and will pass through Jaffa, an ancient city just outside of Tel Aviv.

The last stage in Israel from Be’er Sheva to Eilat on the Red Sea includes a designated Mountains competition climb on the Ramon Crater (at 40km wide, the largest crater in the world), and also features a finish suitable for sprinters. Eilat will be the southernmost point touched by the Giro d’Italia in its history.

The first rest day for the Giro caravan on Monday 7 May sees a transfer to Sicily, which will host the next three stages. Stage four, from Catania to Caltagirone (191km), finishes at the top of the city after many undulations including a short uphill finale.

From Agrigento to Santa Ninfa (Valle del Belice), the 152km fifth stage presents another finale suited to the finisseurs. In its first part, the stage touches the Valle dei Templi and the Scala dei Turchi (Valley of the Temples and the Scale of the Turks) and passes close to Selinunte. In 2018, it will be 50 years after the earthquake that struck those areas on 14 January 1968. The first summit finish of the 2018 Giro will be on Mount Etna. The 163km stage from Caltanissetta features an undulating first section until Paternò, where it starts a 25km climb with an increasing gradient. Then comes the unprecedented climb to the Etna; from Ragalna, on a narrow road, through the parks and solidified lava flows, to reach the Astrophysical Observatory.

Sprinters will have new opportunities on the 7th stage from Pizzo to Praia a Mare, entirely along the Tyrrhenian coast.

On Saturday 12 and Sunday 13 May two uphill finishes make for a challenging weekend: Montevergine di Mercogliano and the Gran Sasso d’Italia (Campo Imperatore). The first, at 208km, starts from Praia a Mare, crosses the Cilento, passing by the beaches of Salerno, then climbs until the finish line in front of the Sanctuary. On the following day, a very long stage at 224km, will bring the riders from Pesco Sannita to Gran Sasso d’Italia, the Mountagne Pantani of this 101st edition. A seemingly endless climb of 45km, leading to the finish line, is punctuated only by a central section with a more gentle slope.

SECOND WEEK – THE CENTER AND THE NORTH-EAST

After the second rest day, in Abruzzo, the race restarts from Penne and heads north to Umbria, finishing at Gualdo Tadino. At 239km it’s the longest stage of the 2018 Giro, and features an undulating finale. A few kilometers after the stage start, the race will pass next to the remains of Hotel Rigopiano where on 18 January 2017 a major avalanche resulted in 29 fatalities and many more injuries.

Stage 11 from Assisi to Osimo is dedicated to the memory of Michele Scarponi. It’s characterised by medium to long climbs at the beginning and the famous ‘walls’ (Muri) of the Marche inland at the end, including the Filottrano Wall (Muro di Filottrano) with slopes up to 14% and finale in the medieval historic center of Osimo.

On Thursday 17 May, the sprinters should be the protagonists – although the circuit of the Tre Monti before the arrival could change the odds. It is a fairly flat stage that will start from Osimo and end in Imola with a finish in the motorsport race circuit.

Stage 13 will start from Ferrara and finish at Nervesa della Battaglia after 180km with the short climb of the Montello in the finale. 100 years after the hostilities ceased, the Giro’s route passes some significant sites of World War I.

Saturday 19 May witnesses a stage entirely in Friuli Venezia Giulia with finish on the “Monster” Zoncolan. It starts from San Vito al Tagliamento and, across 181km, presents no fewer than five Mountain Classification sections throughout its 4,400m of vertical elevation: the Monte di Ragogna with its steep slopes, the Avaglio ascent and then, in the last 45km, without a single meter of flat, Passo Duron, Sella Valcalda and Monte Zoncolan – from the toughest side, Ovaro.

Next, on Sunday 20, the Dolomites stage from Tolmezzo to Sappada with four Mountain Classification sections. The route presents opportunities, especially after Auronzo di Cadore where there will be placed two unprecedented climbs in the Comelico area, both with gradients above 10%. The finale at Sappada features a slight ascent.

THIRD WEEK – TRENTINO AND THE NORTH-WEST

Following the last rest day in Trento (Monday 21 May), is a 34.5km Individual Time Trial, ending in the city of Rovereto, home of the Campana dei Caduti (“Bell of the Fallen”, cast using the bronze from the cannons of the 19 nations that fought in World War I. This almost flat route for ITT specialists has expected average speeds of around 50kph.

The Wine Stage has become an unmissable appointment on recent editions of the Giro d’Italia. This year it will be an in-line stage in the territory of Franciacorta, starting from Riva del Garda and finishing in Iseo. It’s the last chance for the sprinters, before the final stage in Rome.

What follows are the three days with the last mountain stages that will probably decide the Giro… On Thursday 24, the stage from Abbiategrasso starts with a long and flat route until the final climb that leads to Prato Nevoso.

The following day’s stage on the Alpi Occidentali (Western Alps) hosts the Cima Coppi. It starts in Venaria Reale and features four long and challenging climbs including the Colle di Lys, the Colle delle Finestre – with a 9km gravel sector – and the arrival at Bardonecchia (Jaffreu) after a 7km climb with average gradient of 9%.

On Saturday 25 the last mountain stage packs 4,500 meters vertical elevation into just three climbs. Riders will move from Susa on a stage that’s flat in its first part but then faces the unprecedented Col Tsecore before a finale with the ascent of St Pantaléon and the last summit finish in Cervinia.

We transfer to the capital for the finale of this 101st edition of the Giro. The 11.8km circuit in the center of Rome is to be repeated 10 times. It takes in many historic sites along Via Nazionale, Via Sistina, Piazza del Popolo, Circo Massimo (Circus Maximus), and the Terme di Caracalla (Baths of Caracalla) before arriving at finish line at the Fori Imperiali (Imperial Fora) under the Colosseum.

An Exciting and Unforgettable Tour!