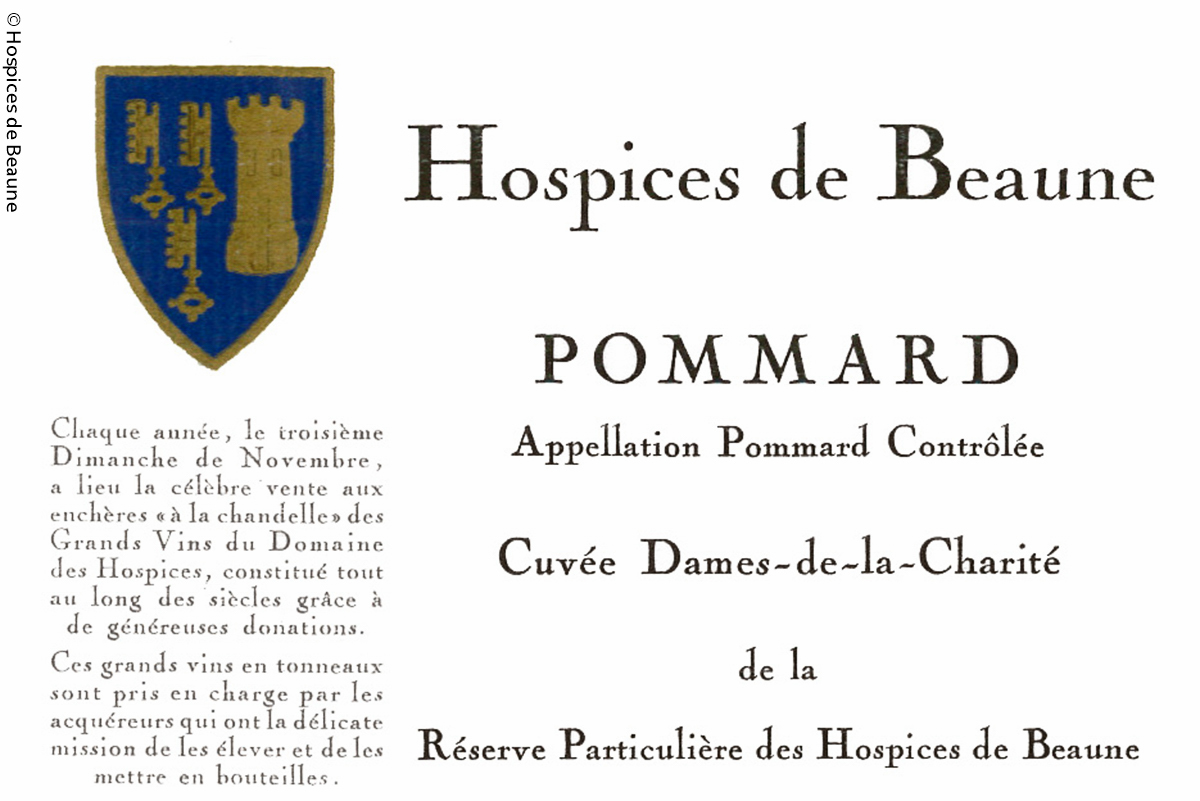 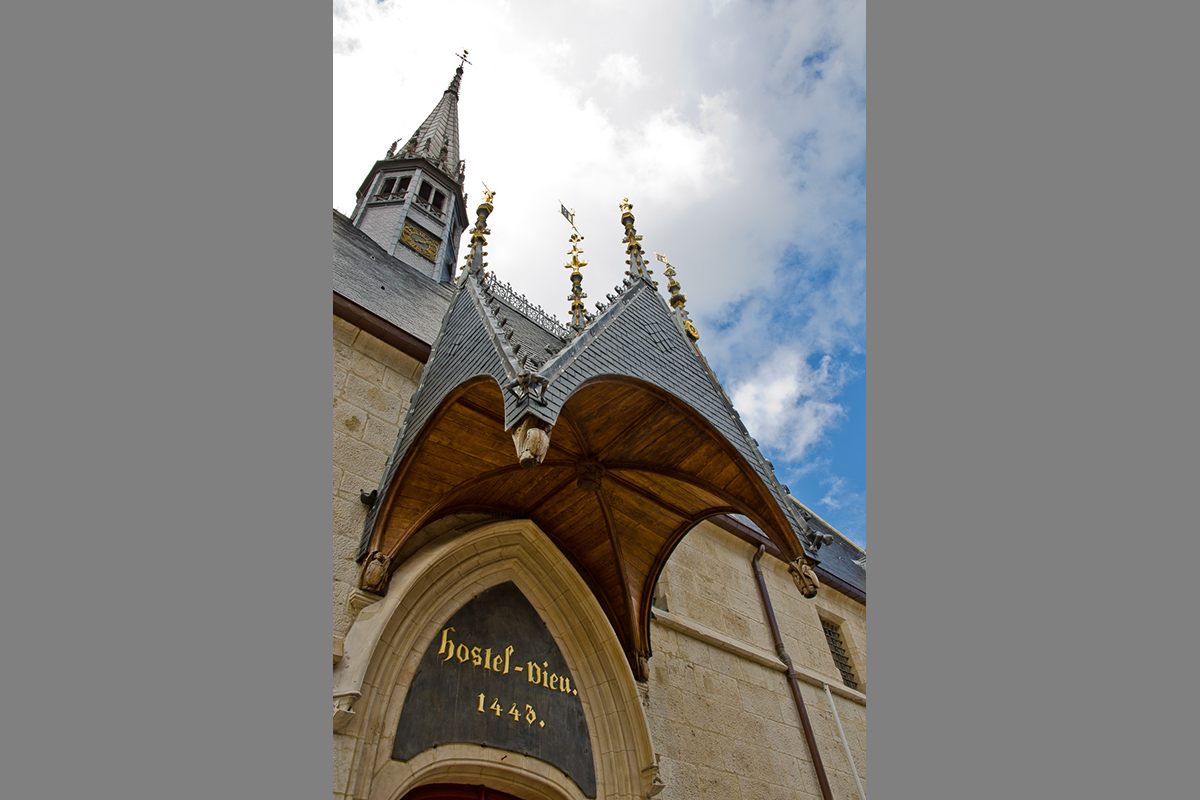 For 576 years, the hospital has provided the Beaune community with modern, quality care delivered compassionately and safely.

The 2018 auction marked the final step in the reconstruction of thehospital in order to offer first-class hotel comfort for all.

The 2019 auction will allow us to continue this work and purchase the most advance dequipment for our operating rooms. By bidding and buying an item from the 2019 vintage at the 159th Hospices de Beaune Auction, you are becoming part of our history and participating in a charitable work.

Bidding and purchasing a charitable wine means participating in a worthy medical cause for the good of all.

L’ Hôtel-Dieu –«A palace for the poor»

At the end of the Hundred Years’ War, Nicolas Rolin, chancelor of the Duke of Burgundy, Philippe le Bon, was moved by the state of misery in which many Burgundians found themselves. He decided to build a hospital for the sick, the old and the deprived. 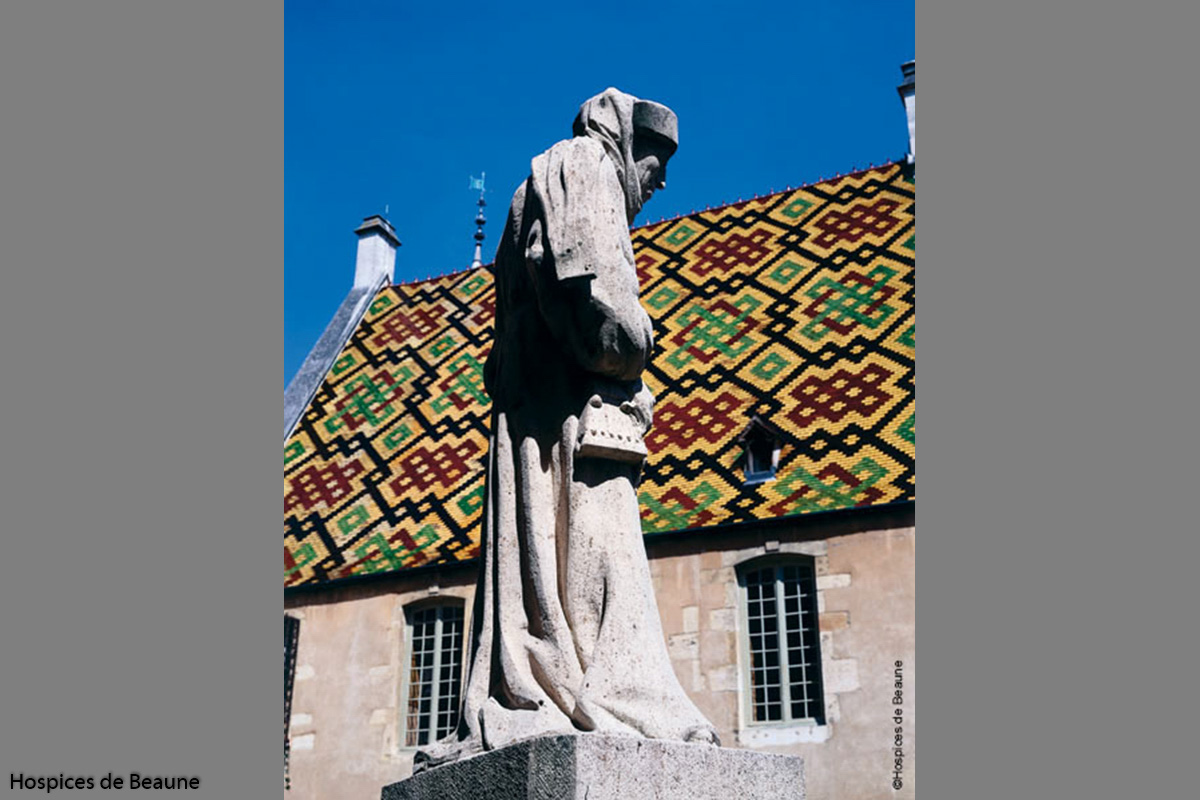 In the founding charter of the Hôtel-Dieu, Nicolas Rolin declared:

“I, Nicolas Rolin (…) from now on and forever, found and irrevocably endow, in the town of Beaune, a Hospital for sick and poor people, with a chapel (…).”

The Hospices de Beaune were born. More than a mere hospital, Nicolas Rolin wanted to create a genuine “Palace for poor people” («Palais des pôvres») and in 1452 the Hôtel-Dieu, with its gothic facades and multicoloured tiled roofs welcomed its first patient. From then on and up to the 20th century, the Sisters of the Hospices de Beaune took care of the sick, elderly, disabled and needy. The last sick person left the Hôtel-Dieu in 1983.

Since 2015, the Hospices Civils de Beaune have fused with the Centres Hospitaliers in Arnay-le-Duc, Seurre and more recently Nuits-St-Georges. This new entity today groups together 982 beds covering all activities. Alongside this evolution, an important modernisation project has been underway since January 2014, with the extension of the hospital in Beaune and entirely redesigning the building inside and out. The Hospices Civilsde Beaune continue their evolution, fully integrated in their territory and the modern age.

The Centre Nicolas Rolin: An establishment for aged, dependent people Restructuring and extension work on this buildingin service since 1983 brought its capacity to 180 beds in November 2013. 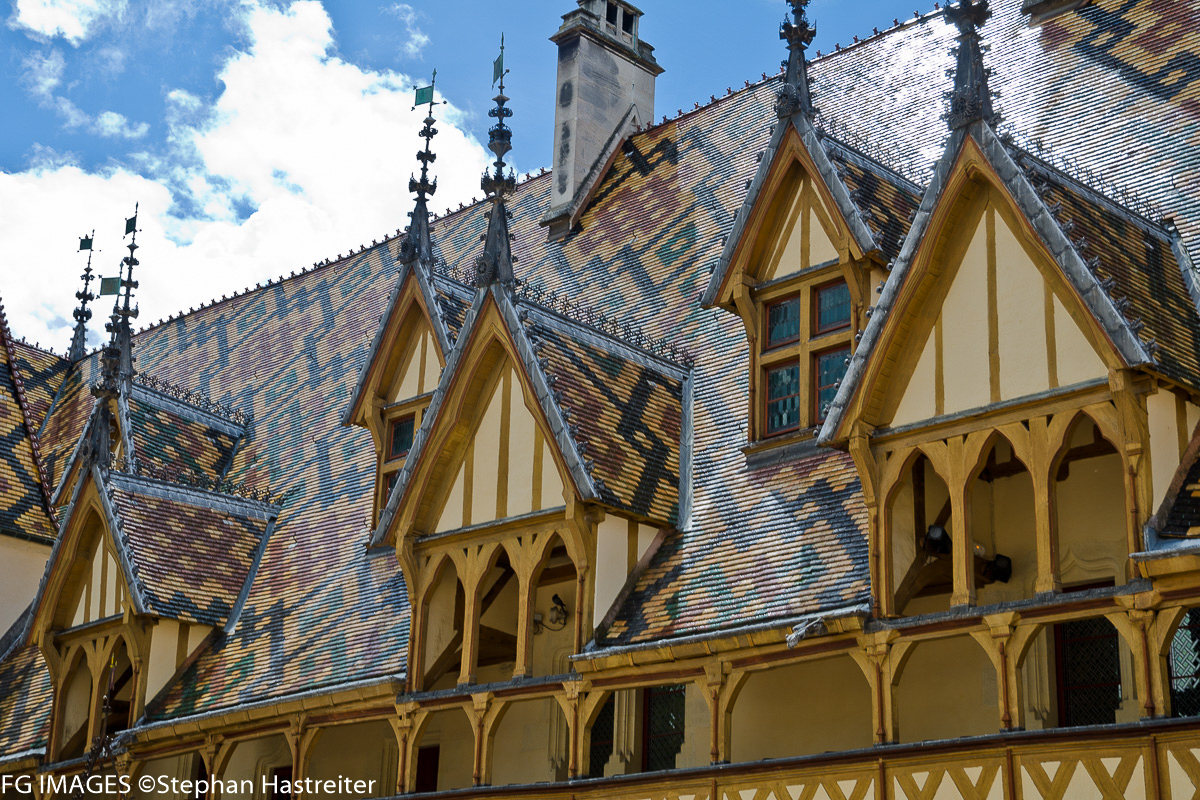 Situated in the town centre and within the prestigious grounds of the Hôtel – Dieu, these retirement nursing homes offer 120 beds for their residents.

Built in 1980 near the Centre Hospitalier, the Institutes train each year more than 130 students, nurses and 30 health care auxiliaries, and completes in this way the services of the Hospices Civils de Beaune.

Reflecting a multitude of terroirs and burgundian generosity

Eversince the XVth century, men and women have been leaving their possessions and wealth to the Hospices de Beaune. In Burgundy, nothing being more precious than vines, it is from vineyard – donations that the Domaine of the Hospices de Beaune has grown reflecting the multitude of great Burgundian terroirs and the generosity of its people. Out of respect for the donors, the Domain is managed with the most exacting drive for quality. This commitment is expressed by rigorous cultivation methods in the vineyards, alway s seeking to remain faithful to the great diversity of Burgundian soils. 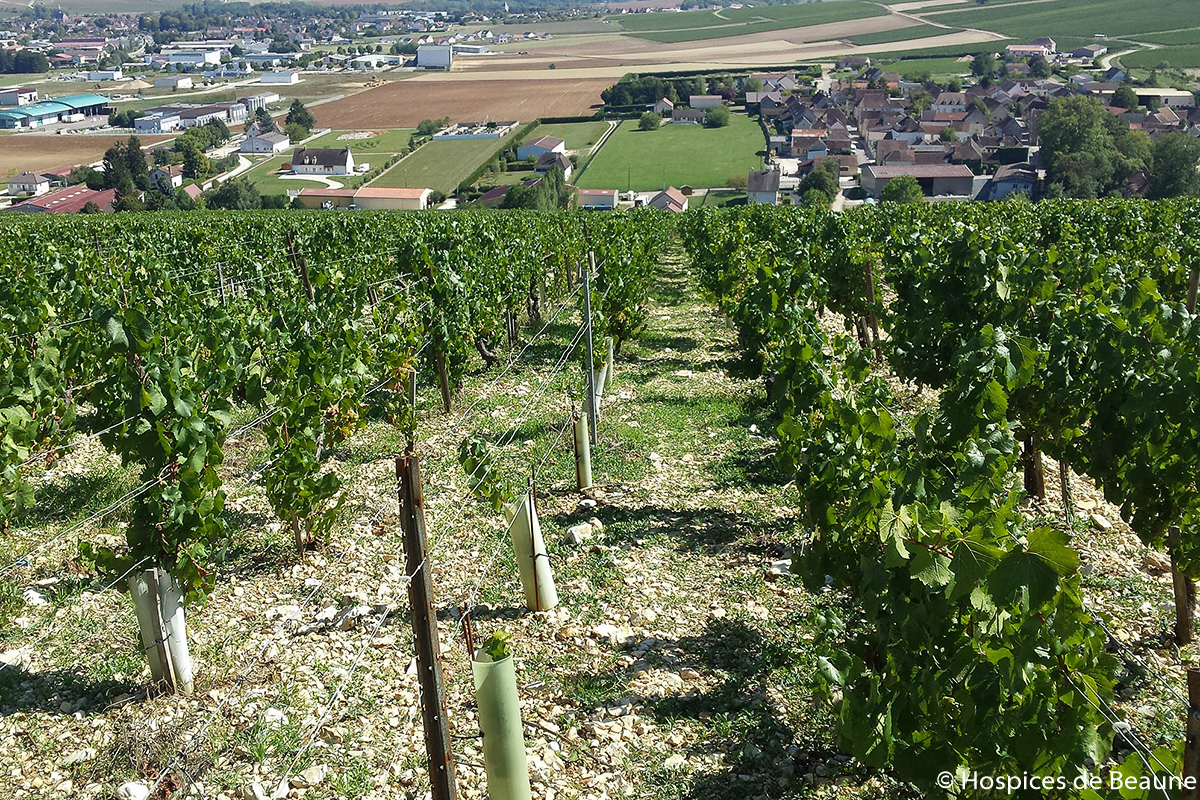 The Hospices de Beaune own vines on the Cote de Nuits as well with the Grands Crus Mazis – Chambertin and Clos de la Roche, and also and in the Maconnais with parcels of Pouilly-Fuissé.

The average age of the vines is around 35years. The production area being run by the Hospices is closeto 60 hectares, of which 50 are used for PinotNoir, therest for Chardonnay. The cuvées are sometimes from single vineyards, and sometimes the result of harmonious assembling of grapes from different plots. This is a singularity of the Domaine, which contributes to the uniqueness of the range of wines being offered by the Hospices de Beaune. 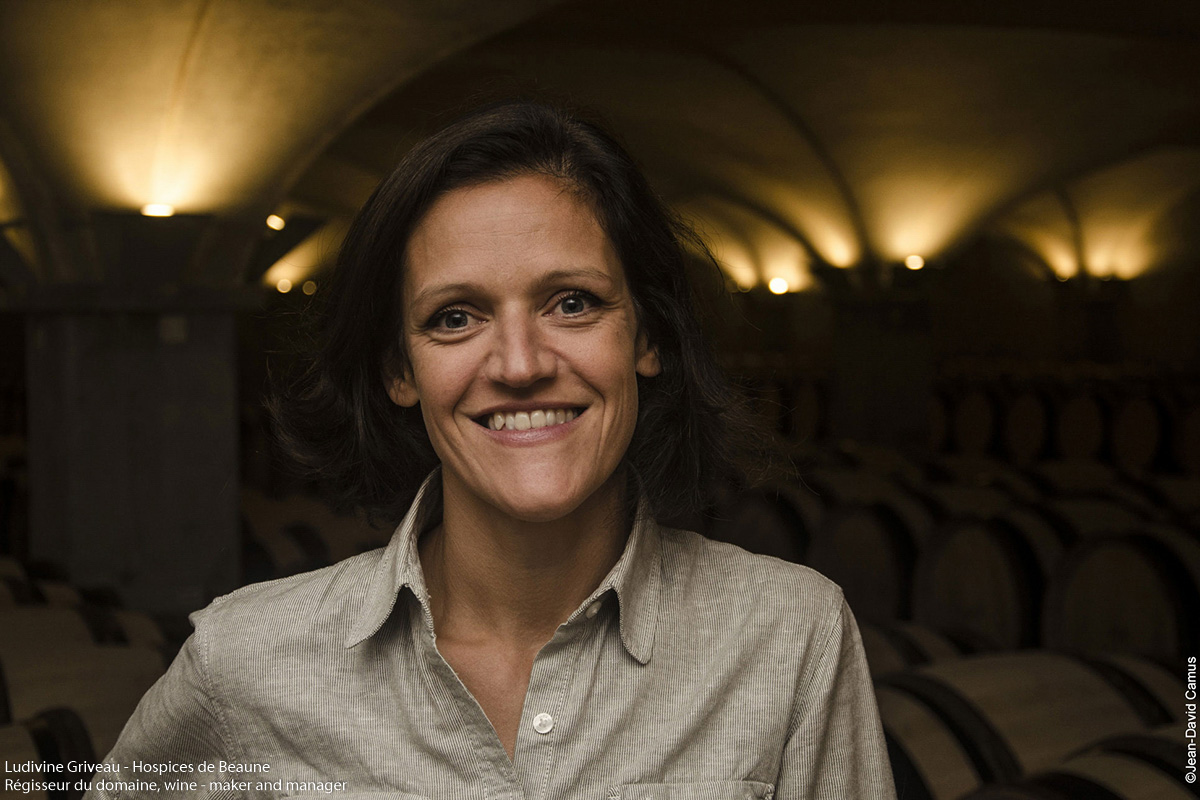 The work in the vine yard is carried out by 23 individuals, known as vignerons, who are employed by the Hospices and working under the direction of Ludivine Griveau, Régisseur du domaine, wine – maker and manager since January 2015.

Each vigneron is responsible for approximately 2,5 hectares of land. They respect their environment and limit the production of their vines in order best to express the typicity of the individual plots (theterroir).

Since 1995, carefully thought through farming is practised: no herbicides are used, ploughing is done in summer and winter and all treatments are chosen with regard to them not endangering the natural biological equilibrium. Since 2008, almost all the grapes have been produced without the use of synthetic products, and according to the methods of biological viticulture.

Harvesting is done by hand, the grapes being transported in small cases to the new vat-house, where, since 1994,t he winemaking takesplace.

Since 1945, every year the Hospices de Beaune have lent their support to one or morecharities by donating to them the proceeds raised from one barrel of wine, called “a pièce” in Burgundy, – The Pièce des Présidents. 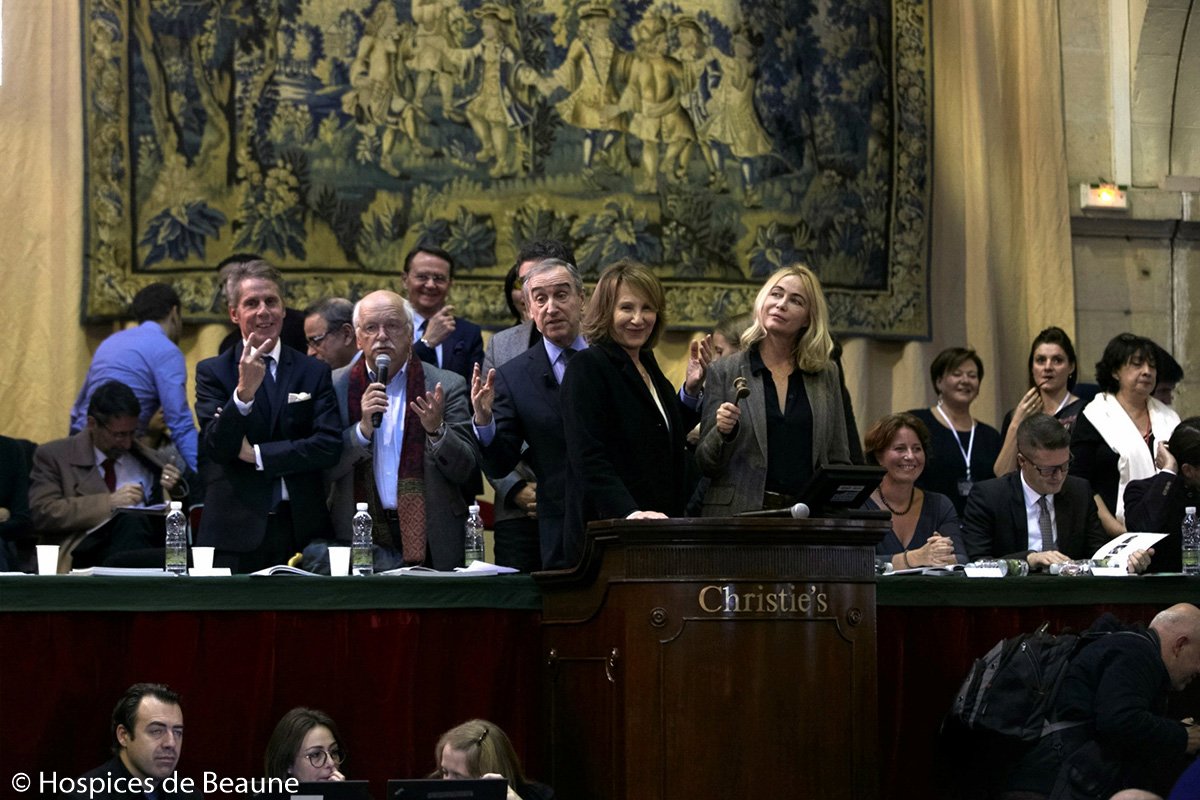 The Pièce des Présidents from the 2019 harvest will be a 228 liters’ barrel from the Corton Grand Cru Les Bressandes appellation.

In 2019, the Hospices de Beaune have decided to donate the proceeds of the charity to two associations: Brain & SpineI nstitute and Autour de Williams.

L’ Institut du Cerveau et de la Moelle épinière has been sponsored by Albéric Bichot, President of the Burgundy wine-house Albert Bichot and leading buyer of the Hospices de Beaune wine auction for twenty years. Dr.Saillant who manage ICM since 2010, was working closely with a memberof the family who passed away in 2016 following a brain injury. Moved by this tragic event, Dr. Saillant has been attentive and compassionate towards the family who naturally decided to support the research made by the ICM. After several meetings and exchanges on the values brought by this auction, Dr.Saillant, sensitive to the charity inscribed in the history of the Hospices de Beaune since its foundation by Nicolas Rolin and Guigone de Salins in 1443 agrees to present the candidacy of the ICM for the 2019 edition. 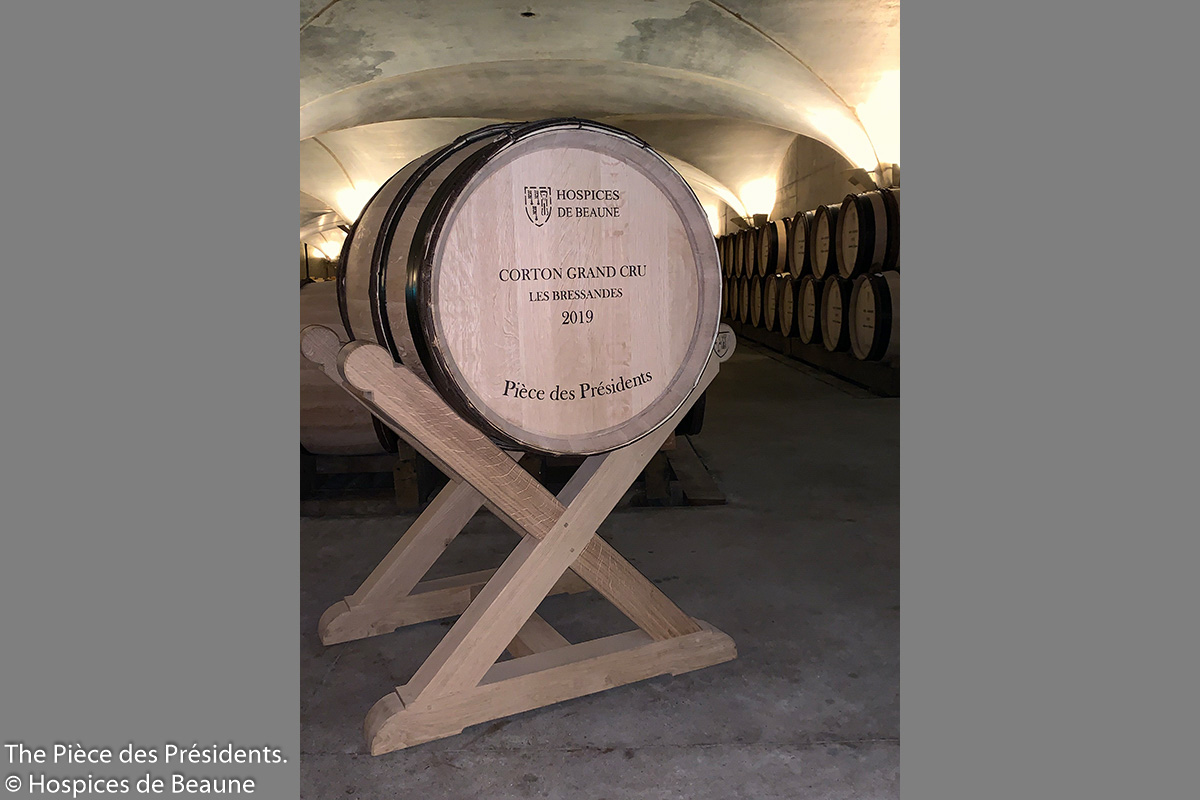 «We had at heart with my wife Constance,to accompany the work directed by Dr. Saillant, exceptional man and great scientist and to pay tribute to a member of our family who worked for several years at the institut du Cerveau et de la Moelleépinière.We hope that the biddings for the Pièce des Présidents will contribute to the success and international reputation of this Institute, unique in the world. » Albéric Bichot.

The Institut du Cerveau et de la Moelle épinière –ICM (Brain & Spine Institute) – is an international brain and spinal cord research center whose innovative concept and structure make it the only institute of its kind in the worls. The ICM brings patients, doctors and researchers together with the aim of rapidly develop treatments for disorders of the nervous system and enable patients to benefit from them as quickly as possible.

The best scientists from all backgrounds and countries come together at the institute to perform leading-edge research in this area. To help researchers advance in their work and give patients tangible reasons for hope, we must all play a role: governement agencies, corporate actors and individuals. No one can afford to idly stand by, because this fight is vital to every one of us.

This French association was created 15 years ago and is bringing together families of children with Williams and Beuren syndrome. It is a disease of rare genetic origin that occurs in all populations and affects both girls and boys.

The Hospices de Beaune auction, every third Sunday of November, enables local Burgundian buyers, and those who come from all corners of the globe, to express their generosity, by taking part in the sale. 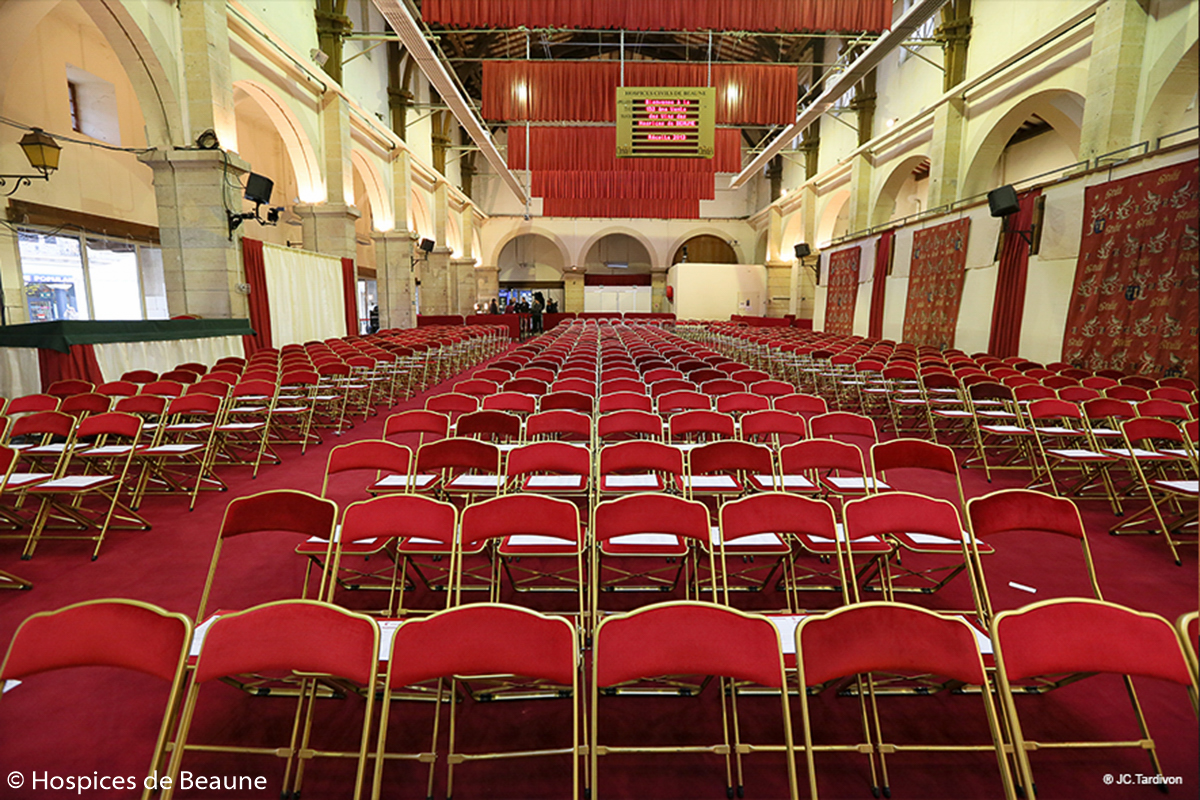